"Good deeds day is just a symbol and serves as a catalyst for the start of volunteering activities that last all year long." 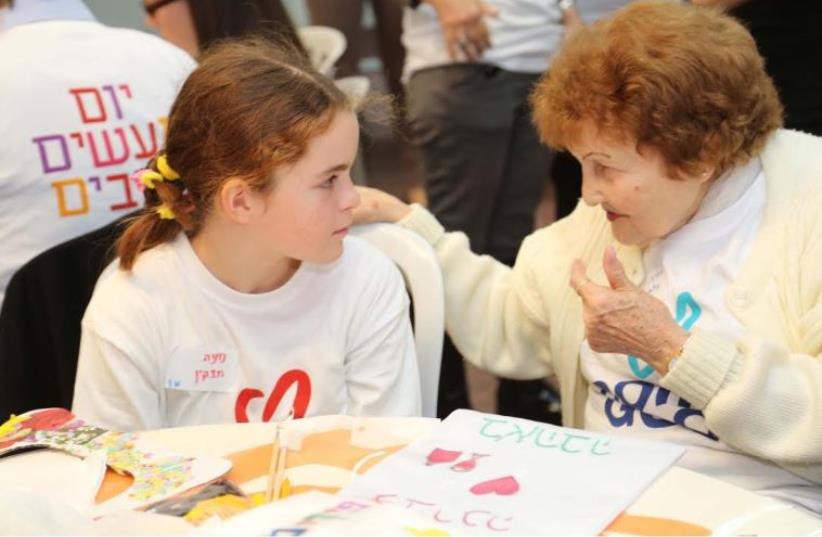 Volunteers giving back to the community on Good Deeds Day
(photo credit: SIVAN FARAJ)
Advertisement
Some 1.3 million Israelis are expected to do some good on Tuesday as part of the tenth annual Good Deeds Day, a project that encourages people to volunteer and give back to the community.Good Deeds Day, initiated by Ruach Tova (“Good Spirit”), a nonprofit organization that is part of the Ted Arison Family Foundation, the philanthropic arm of the Arison Group, has become a global endeavor including some 68 countries, which are set to mark the day abroad on April 10.“This initiative, born ten years ago, has crossed international borders and has become an international cause uniting through its simplicity, and because of the ability of each one of us to connect to and take part in the initiative,” said businesswoman and philanthropist Shari Arison, the projects initiator.“Each year we are fascinated by the creativity of people and the many ideas for doing good. Numerous initiatives in the country and around the world have crossed borders and the goal is to create a critical mass of good deeds that will bring a positive change in the world,” she said.One-in-eight Israelis are expected to take part in projects around the country as schools and youth groups, businesses, soldiers and students are expected to participate in more than 14,000 planned activities, giving back a record four million hours of volunteering.Among the various projects, will be clean up of forests and beaches; renovation and painting of welfare institutions; “fun days” for underprivileged or special needs populations; activities with Holocaust survivors and the elderly; and planting of community gardens.In addition, to mark a decade of good deeds, leading Israeli public figures with expertise in a variety of fields will meet with the public in 10 bars across Tel Aviv and in five in Jerusalem.Furthermore, 10 popular Tel Aviv coffee shops will feature artworks honoring 10 years Good Deeds Day activities.“Good deeds day is just a symbol and serves as a catalyst for the start of volunteering activities that last all year long,” said Rafi Elul, chairman of Ruach Tova.“Over the past few years, we have found that people and groups who have joined for Good Deeds Day continue to volunteer throughout the year.”Last year, more than 830,000 Israelis participated in some 11,000 volunteer projects nationwide and tens of thousands participated in activities in 61 countries around the world, including Italy, Germany, Argentina, Russia, Panama and the US.