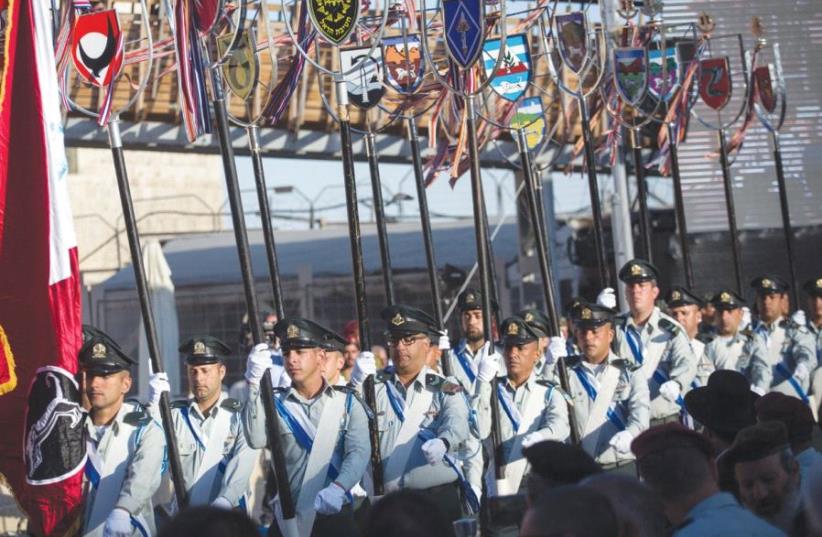 SOLDIERS MARCH during a Jerusalem Day ceremony at the Western Wall in the Old City marking 50 years since the capital’s reunification in the 1967 Six Day War.
(photo credit: HADAS PARUSH/FLASH90)
Advertisement
Jerusalem Day began Tuesday evening with the official ceremony marked at the Western Wall, attended by officials that included President Reuven Rivlin, Jerusalem Mayor Nir Barkat, IDF Chief of Staff Gadi Eisenkot, Central Command head Maj.-Gen. Roni Numa, Jerusalem Affairs Minister Ze’ev Elkin and Police Commissioner Insp.- Gen. Roni Alsheikh.Rivlin called Jerusalem the “heart of the State of Israel” and described the Western Wall as the heart of the city.“We gave our all for Jerusalem because we knew that on Jerusalem we must insist,” Rivlin said. “We will always insist on Jerusalem. There never has been, there never will be any other reality. Here, in these stones, beats the heart of the Jewish people. Jerusalem is the heart of the State of Israel and the Kotel is the heart of Jerusalem.”
During a separate video address for the occasion, Rivlin said he clearly remembered the moment he heard confirmation of the liberation of Jerusalem’s Old City while serving as a reserve intelligence officer in the Jerusalem Brigade.“When I heard over the two-way radio the voices of my fellow soldiers, we could hardly believe it: ‘The Temple Mount is in our hands!’ I can never forget this,” the president said.“We all felt the history – and the future – of Israel, of the Jewish people, rested on our shoulders. And with that, a great joy filled us all, across the city, across the world. We had returned home – to Jerusalem, to Yerushalayim.”A ceremony was held earlier in the day at Ammunition Hill to honor the soldiers who fought in the battles for Jerusalem.During the ceremony, which was attended by Numa and Elkin, medals were awarded to some 1,800 commanders and veterans of the Six Day War, as well as to the families who lost loved ones to the war.More than 180 Israeli soldiers fell along the Jerusalem front over the course of three days of fighting against Jordanian troops, in what was considered one of the fiercest and bloodiest battles of the war.Ammunition Hill was a critical part of the fight for the capital, and a contingent of paratroopers fought to oust the Jordanian legionnaires entrenched there in order to link central Jerusalem with the Israeli enclave on Mount Scopus. Seventy-one Jordanians and thirty-seven Israeli soldiers lost their lives in that battle.Ten of the soldiers who fought in the battle were given citations by the chief of general staff.The medals awarded on Tuesday by Numa and Elkin contained symbols of the city of Jerusalem, the State of Israel and the IDF Central Command.“I am proud to stand here today in front of you, the veteran fighters and commanders, and I am excited to award you this medal as a token of appreciation and in honor of your dedication, courage and heroism,” Numa said, adding that stories of the Six Day War are rich with tales of their heroism as well as that of those who fell.“The war also brought to life wonderful and rare discoveries of courage and heroism, alongside personal revelations of togetherness of soldiers and friendship. Generations of IDF soldiers have enlisted to realize the goals of the army, to defend the country and ensure its existence,” Numa told the crowd.While Israel faces “many challenges that are different from the challenges that you faced 50 years ago, the IDF stands stronger than ever and if forced to prove this in war, we will do just as you did 50 years ago with speed, decisiveness and firmness,” he concluded.
Advertisement
Subscribe for our daily newsletter