The vast majority of Israeli Jews – 82% – said the idea of Zionism is still relevant. 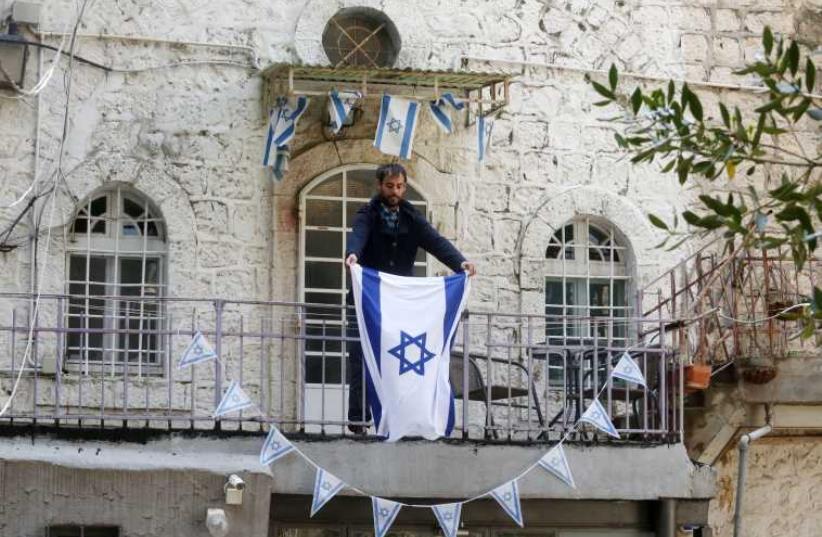 YONATAN SINDEL places an Israeli flag on his balcony
(photo credit: MARC ISRAEL SELLEM/THE JERUSALEM POST)
Advertisement
The vast majority of Israelis say Zionism is still relevant today and most define themselves as Zionists, according to a poll released by the Herzl Center Wednesday in honor of Herzl Day, celebrated on the Zionist thinker’s birthday.Asked to what extent they define themselves as Zionists, with 10 being the most and one the least, about half (51 percent) of the poll’s respondents gave themselves a nine or 10 and 39% ranked themselves from five to eight. Only 11% of Israeli Jews gave themselves a score of one to four.The vast majority of Israeli Jews – 82% – said the idea of Zionism is still relevant, while 9% were unsure and another 9% said Zionism is irrelevant.Most Israelis (61%) said that Herzl’s vision has not fully come true yet, and 9% said it did not come true at all, while 24% said Herzl’s vision came true. The rest did not know.Avraham Duvdevani, chairman of the World Zionist Organization, which Herzl founded in 1897 to bring his Zionist idea to fruition, said he agrees that Herzl’s vision has not yet fully come true, saying that even now the WZO encourages aliya, supports Jewish communities in the Negev and Galilee and fights anti-Semitism.Most respondents also knew that Theodore Herzl wrote the book The Jewish State, with 84% guessing his name correctly, 1% giving a wrong answer and 16% saying they do not know.The poll was conducted among a representative sample of 503 Israeli Jews by the Midgam polling company.MKs Hilik Bar (Zinoist Union), Tamar Zandberg (Meretz), Yoav Kisch (Likud), and Oded Forer (Yisrael Beytenu) took part in the Herzl Day festivities, which focused on the 120th anniversary of the publication of The Jewish State.