A quarter of young religious women enlisting in the IDF, study finds

Increasing enlistment among young women from national-religious sector flies in the face of a campaign by hard-line rabbis against the trend. 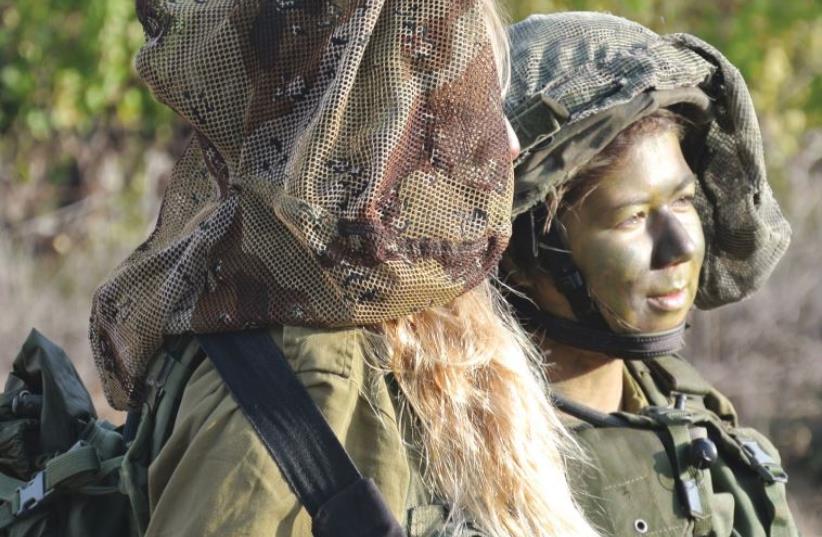 The IDF's new coed combat units are the result of a long struggle for the integration of women into fighting roles in the army
(photo credit: SETH J. FRANTZMAN)
Advertisement
Increasing numbers of young women from the National Religious sector are going to the army instead of doing national service, according to research on an issue that has become a major battleground between moderates and conservatives in the community.Strikingly, the increases come from pupils in the higher socioeconomic strata of the National Religious sector.According to research published on Monday by the Ne’emanei Torah Va’Avodah organization and conducted by Ariel Finkelstein, more than a quarter of National Religious young women enlisted in the IDF in 2014, the latest reliable statistics available, up from just over 20% in 2011.This represents a 22% increase over the four-year period.In schools ranked in the two highest levels on a socioeconomic index, the increases were even higher, where the number of young women enlisting increased by 41% between 2011 and 2014.These results were reflected in the steep increases seen in the Tel Aviv, Central and Haifa districts, and decreases in enlistment in the country’s periphery in the North and South.There was also a significant increase in the number of young women graduating from the Bnei Akiva school network enlisting, from 14% in 2011 to 20% in 2014. The Bnei Akiva network is part of the National Religious mainstream, and although the character of its schools varies, increased enlistment from such schools demonstrates that the phenomenon is becoming ever more acceptable.The numbers of young women enlisting from the more religiously conservative Tzviyah network of schools only increased by three percentage points from 6% to 9% – and that increase was recorded mostly in one year, from 2011 to 2012, before a major campaign from conservative elements in the community against women enlisting began.The chief rabbinate and many senior religious-Zionist rabbis have long been opposed to religious women serving in the army, fearing that they would be negatively influenced by the military environment.Despite this, and as demonstrated by the new research, large numbers of young women from the National Religious sector have been enlisting in the IDF in recent years, including from the community’s mainstream and from prestigious high-schools, a phenomenon that has been bitterly opposed by leading rabbis in the community.“The statistics prove that there is almost no religious [educational] institution or town where young women are not enlisting,” said Ne’emanei Torah Va’Avodah director Shmuel Shattach.“Instead of fighting this phenomenon, we should inform, advise, prepare and escort those enlisting [for their coming service]. The solution to the challenges bound up in national, as well as military service, [for young religious women] is not in strengthening gender segregation in exclusive National Religious communities but rather [by] building a strong educational framework which educates pupils about life’s complexity and how to deal with the wider world.”