A swami, a rabbi, a monk walk into a Jerusalem confab...

A first of its kind meeting of Israeli and Asian faith leaders will be held in September and will host key religious figures from India, China, Japan, Korea and Myanmar. 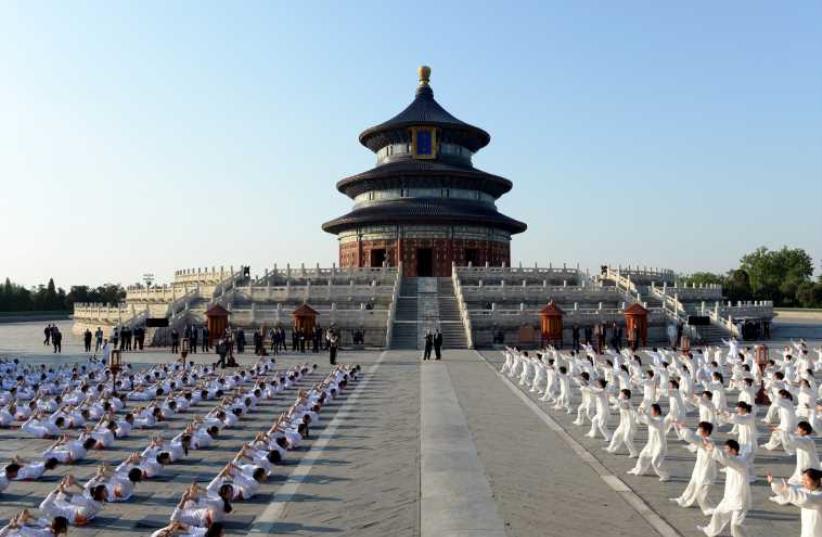 Indian Prime Minister Narendra Modi and Chinese Premier Li Keqiang attend the Taiji and Yoga event at the Temple of Heaven park in Beijing, China on May 15
(photo credit: REUTERS)
Advertisement
Interreligious dialogue among rabbis, priests and imams are commonplace.But “civilizational dialogues” among rabbis, the dean of Hindu gurus and a Myanmar holy man, though they have taken place in the past, are much less frequent.They are less frequent still when sponsored by the Israeli government. But that is precisely what will take place in September when about a dozen leading religious figures from the East – India, China, Japan, Korea and Myanmar – come to Jerusalem for a first of- its kind meeting of Israeli and Asian faith leaders.The conference, organized by the Foreign Ministry together with the American Jewish Committee and the World Council of Religious Leaders, is scheduled to take place September 11-15.Akiva Tor, the head of the Bureau for World Jewish Affairs and World Religions in the Foreign Ministry, explained that given Israel’s strengthening ties with the countries of East Asia, “it is appropriate that we convene a dialogue of civilizations to undergird these growing strategic, political and economic connections with ties of culture, spirit and deep mutual understanding.”The abiding philosophy regarding diplomacy inside the Foreign Ministry is that it is a multilayered thing.“People maybe mistakenly think that foreign ministries and diplomatic relations are all about foreign policy in the very narrow sense, which is UN resolutions and votes, and summit meetings,” said Simona Halperin, a veteran diplomat who is one of the organizers of the parley.“But actually, diplomacy is much more than that. It goes to soft power of nations that derives from cultural, economic, scientific, spiritual and other spheres of cooperation,” she said. “And that can only happen when you have a basis of mutual knowledge on both sides.”Israel, she said, is not only “taking the blinders off and looking toward the East,” but there are similar tendencies taking place there as well, with East Asian countries showing a greater and growing interest in Israel and Jewish culture.Tor said the idea behind the conference is “to take relations with the countries of East Asia to an additional level,” adding that “we want them to get a better understanding of Israel, and to give us a better understanding of them.”The “them” referred to are some of the most influential leaders in the faith traditions of the East: Hindu, Buddhist, Sikh, Shinto, Jain and Taoism.Though the names of the participants are not household names in the West – Avdheshanand Giri, Teranori Terai, Acharya Chandanaji, Hsin Bao, Ashin Nyanissara – to the adherents of the religions they represent they are extremely influential.In Israeli terms, Giri, know as Swami Giri, is roughly equivalent in India to the head of Shas’s Council of Torah Sages. He is a guru to multitudes, and the head of the thousands of ashrams across India.The Sikh representative, Giani Gurbachan Singh, has been called the “Sikh pope,” and Chandanaji is the first woman to attain the most senior position in the Jain religion.From Japan, the representative will be Terai, a very senior Shinto priest.Though not known as an outwardly religious country, Shinto is a significant part of Japanese culture, and its leaders have influence in the Japanese leadership class.One of the Chinese representatives, Xue Cheng, is president of the Buddhist Association of China, one of the state-approved religious frameworks there. He also sits on one of the country’s national political advisory boards. Another Chinese representative, Lu Wenrong, is the head of the country’s Taoist Association.Hsin, from Taiwan, is the influential abbot of a monastery in southern Taiwan that holds one of the relics of Buddha, and Kim Wan Doo from Korea is the head monk at the Seon Sangdo Meditation Center in Seoul, and is basically the supreme patriarch of Korean Buddhism.Other participants are to include Kobad Zarolia, a Zoroastrian high priest from Canada, a key figure for hundreds of thousands of Zoroastrian followers, mostly in India; and Ashin Nyanissara, one of the most influential and respected Burmese monks.For many of the participants, this will be their first visit to Israel. One of the challenges in organizing the conference is finding an appropriate vegan caterer, one who also does not use garlic or onions, foods not eaten by many Buddhists.Among the Israeli participants expected to take part are rabbis representing both Orthodoxy and progressive Judaism – such as Daniel Sperber, Avi Gisser and Yuval Cherlow from the Orthodox camp, and Naamah Kelman representing Reform Judaism.Plus, there will be academics such as Micah Goodman, Tova Hartman and Menahem Blondheim.No representatives from the haredi camp are involved. Both President Reuven Rivlin and Prime Minister Benjamin Netanyahu have been invited to address the group. Rivlin has accepted and will host the participants at his official residence, but Netanyahu has not yet given an answer.Organizers discount the possibility that Netanyahu may decide not to participate so as not to antagonize his haredi coalition partners, who may view non-monotheistic religions as idol worship, with whom there is no reason to hold a dialogue.