The two also discussed the PA effort to obtain a Security Council resolution calling for a cessation of settlement construction. 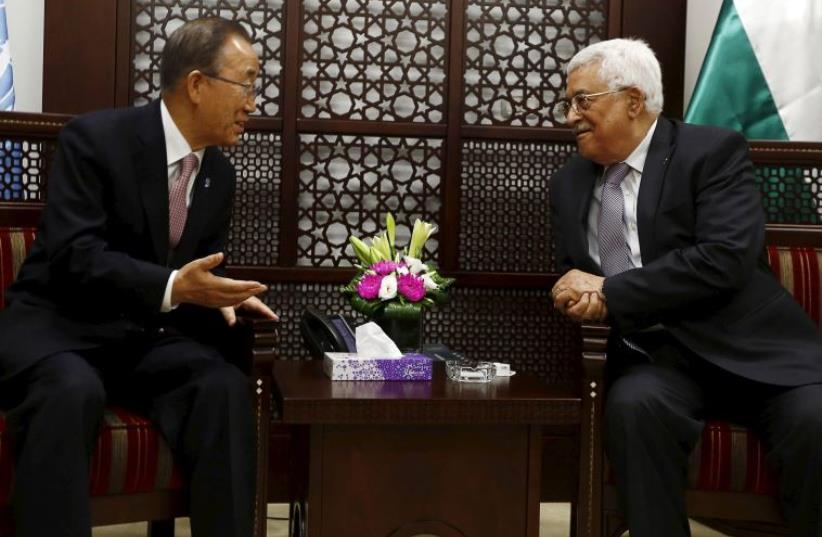 Palestinian Authority President Mahmoud Abbas (R) meets UN Secretary-General Ban Ki-moon in Ramallah October 21, 2015.
(photo credit: REUTERS)
Advertisement
NEW YORK - Palestinian Authority President Mahmoud Abbas met with United Nations Secretary-General Ban Ki-Moon on Sunday to discuss the ongoing violence in the Middle East and the road to a possible renewed peace process.During the meeting, Ban Ki-Moon reiterated his “deep concern over the situation and the need for both sides to diffuse tensions.” He also told Abbas that “a political horizon must be restored without further delay for a resumption of peace negotiations towards a two-state solution.” He further underscored the need for making progress on Palestinian unity and for greater leadership on the reconstruction of Gaza. The two also discussed the PA effort to obtain a Security Council resolution calling for a cessation of settlement construction, according to the PA President’s spokesman, Nabil Abu Rudaineh.Abu Rudaineh also said that during the conversation, Abbas brought up the French idea to hold an international conference to solve the Israeli-Palestinian conflict, which he believes, is a  way of “salvaging” the peace process.Abbas’ spokesman added that the President briefed the UN chief on the situation in the Palestinian territories, including Israeli “incursions into Palestinian cities, daily extra-judicial executions and arrests, as well as continued settlement activities.”