‘We call on Israeli pilots to stand on the right side of history,’ says the petition.

An African migrant wears a T-shirt with a Hebrew phrase referring to the Holocaust," I promise to remember... and never forget!" in south Tel Aviv July 17, 2013.
(photo credit: REUTERS)
Advertisement
Amid growing reports that the government is planning to deport tens of thousands of migrants from Sudan and Eritrea to Rwanda in March, an online campaign has been launched to beseech Israeli pilots not to fly asylum-seekers to what many activists deem a death sentence.The campaign, initiated this week by the NGO Zizim Community Action, calls on the public to send letters to the Israel Aviation Association and the Israel Pilots Association, which includes all the pilots in the country, to refuse to fly migrants to any dangerous African country.According to the NGO’s CEO, Raluca Gena, the online campaign is the first step toward a series of activities against what they, and many other human rights organizations and Jewish communities around the world, are calling an immoral deportation.“Throughout the world, citizens are fighting cruel expulsion decrees and stand alongside refugees and asylum-seekers,” Gena said on Thursday.“This is a test for the Israeli public to determine the fate of tens of thousands of people. In recent months, pilots in Germany and the UK have managed to stop more than 200 deportations, and we call on Israeli pilots to follow their European counterparts and stand on the right side of history,” the NGO leader said. 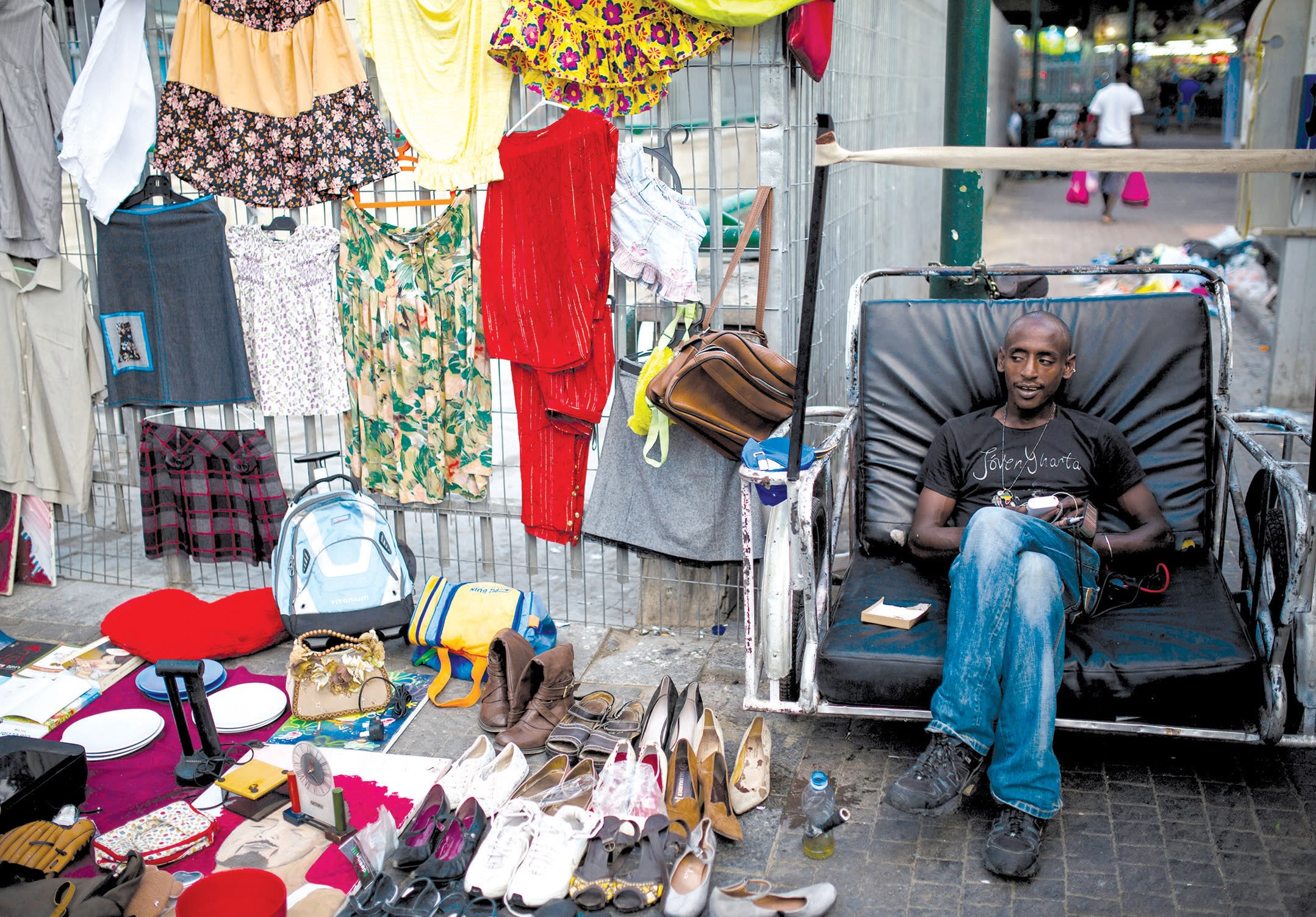 AN AFRICAN MIGRANT street vendor waits for customers in South Tel Aviv in July. (REUTERS/AMIR COHEN)Presently, approximately 35,000 Eritrean and Sudanese asylum-seekers live in Israel. Among their 13,764 asylum applications submitted since 2013, only 11 have been approved by the Interior Ministry as of July 2017 – 10 Eritreans and one Sudanese.The ministry’s Population, Immigration and Border Authority has yet to review the vast majority of applications amid an aggressive ongoing campaign to deport the endangered community, who the prime minister’s coalition dismisses as illegal “infiltrators.”Other democracies around the world have accepted an average of 84% of Eritrean and 56% of Sudanese applications.Citing the 1951 UN Convention on Refugees, which Israel was among the first nations to sign, Gena said the government is abdicating its moral responsibilities to the refugee community.“The Refugee Convention, to which Israel is a party, states unequivocally that an asylum-seeker should not be returned to his country or deported, and that he should not be prosecuted even if he enters the country illegally,” Gena said.Distressed by the government’s decision to begin the deportations in March, MKs Michal Rozin (Meretz), Dov Henin (Joint List) and Eyal Ben-Reuven (Zionist Union) announced a special emergency conference on refugees and asylum-seekers for next Wednesday.The conference will include civil-society organizations, academics, lawyers and experts in the field, along with asylum-seekers and refugees who will present their stories.“In the discussion, we will examine the extent of the phenomenon and present the current situation in order to formulate a plan of action for the future that will benefit residents of south Tel Aviv and refugees and asylum-seekers in Israel,” the MKs said in a statement. 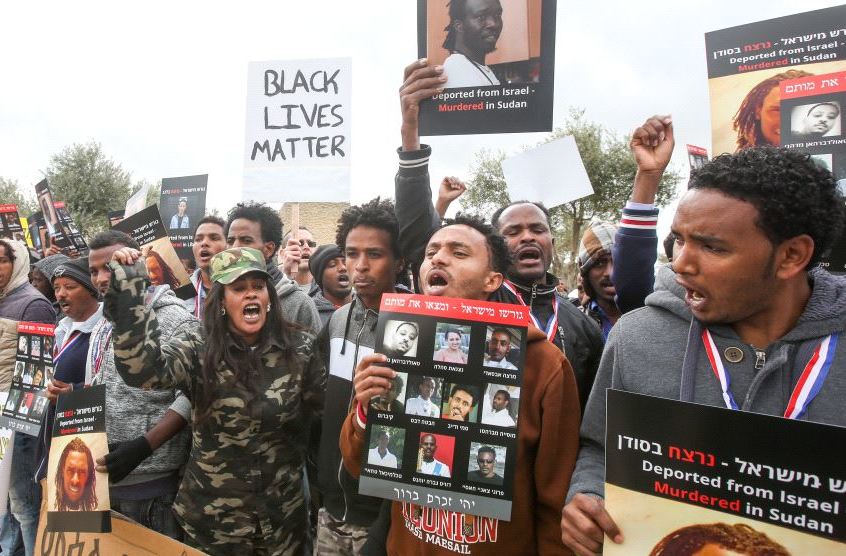 Sudanese and Eritrean immigrants protest their treatment in front of the Knesset. (MARC ISRAEL SELLEM)Outside of Israel, prominent leaders of the North American Jewish community sent a public letter to Prime Minister Benjamin Netanyahu on Monday urging Israel not to imprison or deport tens of thousands of Sudanese and Eritrean asylum-seekers.Rather, the leaders – who sent an initial letter regarding the controversial issue to Netanyahu in November – urged him to allow North American Jews to help resolve the matter.Signatories include Mark Hetfield, president and CEO of the Hebrew Immigrant Aid Society (HIAS), the global Jewish nonprofit that protects refugees; Rabbi Jill Jacobs, executive director of T’ruah: The Rabbinic Call for Human Rights; Rabbi Jonah Dov Pesner, director of the Religious Action Center of Reform Judaism; Jeremy Ben-Ami, president of J Street; and Nancy Kaufman, CEO of the National Council of Jewish Women.“The government of Israel recently announced its plans to imprison or potentially deport tens of thousands of Sudanese and Eritrean asylum-seekers unless they leave voluntarily before April,” the letter states.“The ultimatum follows a mounting campaign of escalation on the part of the Israeli government to pressure the roughly 38,000 African asylum-seekers remaining in Israel to self-deport. While Israeli authorities contend that the population in question – most of whom entered Israel between 2007 and 2012 – are economic migrants, HIAS and other rights groups argue that they are asylum-seekers and refugees deserving of protection.”The letter continues: “Israel’s Ministry of Interior acknowledges that thousands of Eritreans and Sudanese in Israel have submitted written asylum requests and are awaiting a response, while thousands more have been prevented from doing so... Media reports indicate that Rwanda and Uganda would be the African countries which asylum-seekers currently in Israel would have the choice of traveling to, but the countries deny that such an agreement with Israel has been made.”
A “line has been crossed,” said HIAS’s Hetfield. 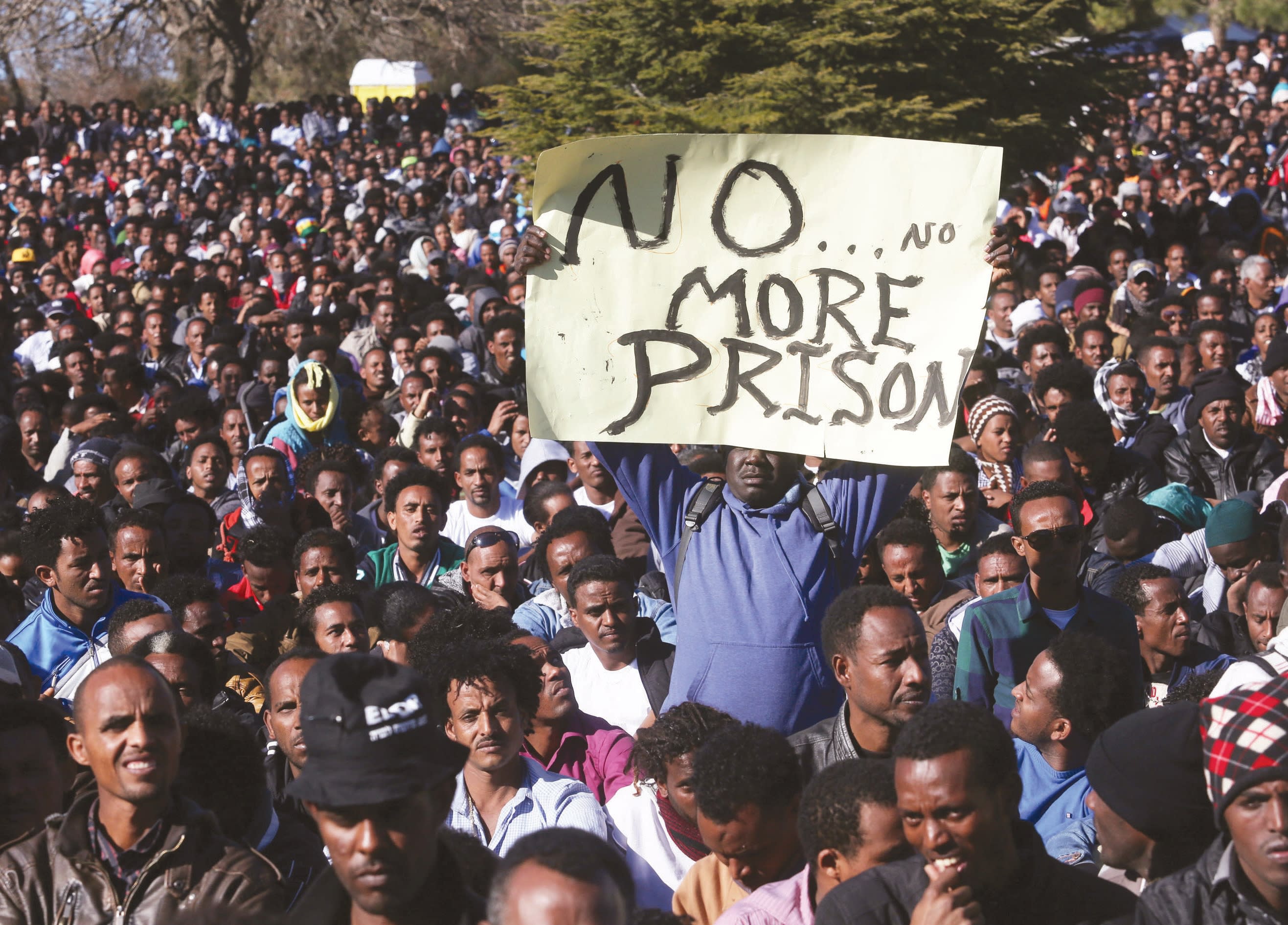 A rally in Jerusalem for African migrants in 2014. (MARC ISRAEL SELLEM)“Forcing asylum-seekers to choose between imprisonment and self-deportation violates the international protections Israel helped create after the Holocaust to ensure that individuals fleeing war and genocide have the opportunity to find safety,” he said. “In the United States, Israel and around the world, HIAS and our supporters remain committed to addressing the global refugee crisis in a compassionate, humane and legal way.”The consortium of leaders noted that outside of Israel, an average of 84% of Eritrean asylum-seekers are granted legal status, as are 56% of Sudanese nationals, while Israel has accepted fewer than 1% of asylum claims. Moreover, numerous reports have documented the dangerous conditions asylum-seekers face upon leaving Israel, including threats of trafficking, persecution and exploitation.“Outsourcing our humanitarian obligations to asylum-seekers is not a sustainable or moral strategy,” HIAS Israel director Sivan Carmel said.“Israel has both a responsibility and a capacity to do the right thing and not put refugees’ lives in jeopardy,” Carmel said. “They came to us to seek protection and we cannot turn our backs on them. We cannot turn our backs on our own heritage.”