Activists march in Jerusalem to demand better treatment of livestock

Organizer: It’s time to think about the relationship between humans and animals. 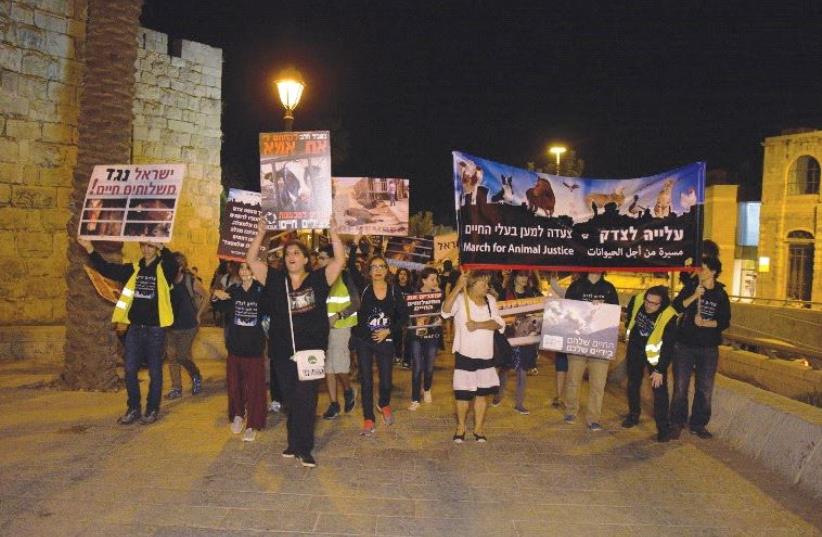 ANIMAL RIGHTS ACTIVISTS march by Jerusalem’s Old City on Thursday.
(photo credit: DAVID SHISH)
Advertisement
In a plea to carnivores during the High Holy Days to search their consciences about their contributions to industrialized animal cruelty, dozens of vegans gathered outside Jerusalem’s Old City to protest the inhumane treatment of livestock in Israel and abroad.Carrying placards with images of vulnerable, caged cows and chickens, accompanied by quotes from the Bible and Mahatma Gandhi saying, “From Zion there shall be compassion,” and “Violence begins with the fork,” the group prepared to march to the city center on Thursday night.Ariel Nura Cohen, 30, a Hebrew University student and co-organizer of the protest, said he used social media several months earlier to arrange the protest for like-minded activists, to take place during the holiest time of the Jewish year.“Right now in Jerusalem, it’s the period between Rosh Hashana and Yom Kippur, and among other things, it’s time for people to search their souls, and it’s a great time for individuals to think about the relationship between humans and animals,” said Cohen.“There are all kinds of industries where animals are being used by humans, and we want people to think about how they contribute to that, and what they can do to prevent cruelty. You can see the suffering of the animals in their eyes, and you can really feel it. When you see them suffer and how they are killed, you can feel in your heart that it is wrong, and there is no reason to do it.”Informally titled “March for Animal Justice,” Cohen said he previously organized similar protests in Tel Aviv and Haifa.“We thought it was time to do it in the capital of Israel – the spiritual center of the country, where the government is based and decisions are made,” he said a few meters outside Jaffa Gate.Asked what the desired outcome of the protest is, Cohen cited stricter protocols in the animal industry to reduce suffering, and for people to take personal responsibility for their contributions to that suffering.“People have to understand that they have responsibility for this,” he said. “It’s not just the government; it has to come from us, the people.It’s time to take responsibility – to think about the future of the planet, and the animals – and see what your part is in the injustice that has been going on for so long.”Rena Yechieli, a middle- aged nurse and vegan, said that her strong belief in animal rights compelled her to attend the protest and march.“I believe in not using animal products for moral reasons and ecological reasons, and that’s why I’m here,” she said. “I would ask [meat-eaters] to think about their roles, and to be aware of the suffering he or she is part of, and to make a choice based on knowledge and reality.”“All beings have to share the earth, and if we can be compassionate and healthy at the same time, I think that’s the way to go,” Yechieli continued.To that end, she said she hoped the government would regulate the meat industry to improve the conditions the animals endure before they are slaughtered.Galit Weisberg, a 28-yearold data scientist, who has helped arrange previous marches, as well as Thursday’s, stressed the importance of mitigating all unnecessary forms of suffering.“I think that there is a lot of suffering in the world today, unfortunately,” she said. “But the suffering of animals is one of the largest and most preventable. It hurts me to think about it, and it’s really easy to prevent, as opposed to a lot of other suffering. I want to have as little suffering as possible in the world for humans and living beings.”In terms of addressing otherwise compassionate carnivores, Weisberg said the High Holy Days are a good time for them to search their souls about their contributions to animal suffering.“There is a lot of abuse, and it’s crazy,” she said. “I want them to know about what’s happening, and to think about if they want to take part in it.”Tamar Aderet, a 24-year-old occupational therapy student at the Hebrew University who attended the protest with her boyfriend, echoed the other demonstrators’ sentiments.“We both have been vegans for a couple years, and we think it’s really important to raise awareness about animal rights,” she said.Asked what she would say to people who love eating steak and chicken, Aderet invoked pets as a point of comparison.“If you have a dog or cat that you really love, just think about the possibility that one day someone could kill him or her in order to eat,” she said. “What about cows and chickens, which are also [sentient] animals?”