One migrant is in a night program which will allow him to continue working as a court translator in Tel Aviv. 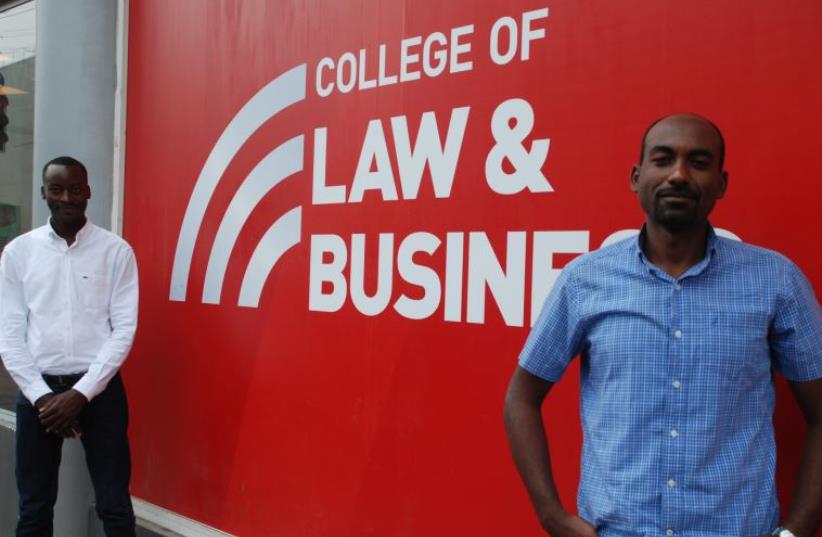 Mutasim Ali, 28 of Sudan, and court translator Suleiman Masgana, 37 of Eritrea
(photo credit: PR)
Advertisement
The College of Law & Business in Ramat Gan has enrolled two African migrants for the academic year that begins on Sunday.Mutasim Ali, 28, a Sudanese activist, and court translator Suleiman Masgana, 37 from Eritrea, had to weather a wide range of challenges to reach this point. College attendance is a rare privilege for most migrants.Both men had journeyed extensively in Africa before reaching Egypt and making their way to Israel despite facing a range of dangers along the way.Ali fled imprisonment in Sudan where he opposed the dictatorial rule of Omar Bashir. He was later detained in Israel in Holot, until six months ago.Calling the status of Israel’s handling of the migrants “complex,” Ali said “there are still many good people pushing for good policies” and suggested current practices “do not really represent Israel’s democratic values.”“I believe it will be better in the future,” added Ali, who hopes to work for migrant rights in Israel someday as a lawyer.In anticipation of the school year, Ali said “things are going very well.The students and the administration have been very nice.”He was “very excited” since attending law school is a “dream fulfilled,” Ali said.Masgana said he has found the college and its students very supportive in “accepting everyone” and “looking at you like a person” regardless of your background. He has enrolled in a night school program which will allow him to continue working as a court translator in Tel Aviv.Masgana has lived in Israel for eight years and has never been detained.But, he said, “if one person suffers, I also suffer.”Both men said that despite Hebrew being a second language they felt that their experiences in Israel gave them strong enough background to weather their studies. Masgana, though, said he planned to write his papers in English, which is permitted.The college’s president, Moshe Eliya Cohen, said that “as the leading academic institution in Israel for human rights and social change, it is only natural that Mutasim and Suleiman would undertake their legal education with us.”Cohen also hoped these new students would help “navigate Israeli society to a better place.”