The school had wanted to build a ‘tranquility room’ for some time given the reality of life in Sderot, where most children have lived with the threat of rocket fire for their entire lives. 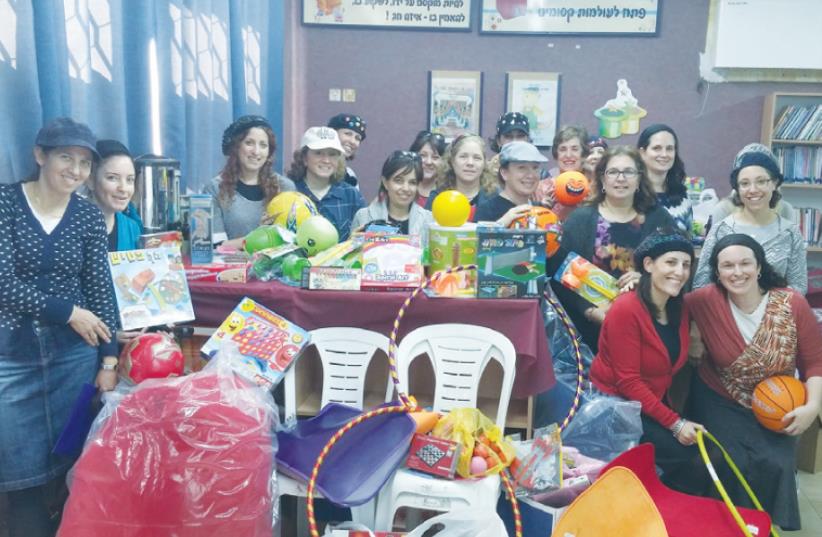 ISRAELI VOLUNTEERS display a toy-filled tranquility room they have donated to the AMIT HaRoeah elementary school in Sderot to help children there overcome trauma from rocket attacks.
(photo credit: Courtesy)
Advertisement
This Hanukka, children from the AMIT HaRoeh elementary school in Sderot, many suffering from post-traumatic stress disorder (PTSD), were given a small holiday miracle, as AMIT school system women volunteers established a ‘tranquility room’ for them.The room is meant to be used for therapy as well as a relaxation and play room where children who suffer from PTSD symptoms such as bed wetting, nightmares, and anxiety can come for a break during the day.AMIT HaRoeh has a student population of more than 110 students, including Israelis of Ethiopian origin and immigrants from former Soviet countries, from first to sixth grades.The school had wanted to build a ‘tranquility room’ for some time given the reality of life in Sderot, where most children have lived with the threat of rocket fire for their entire lives.Following Operation Protective Edge last year, which left many children dealing with the aftermath of trauma from sirens and rocket fire, the need for a special room became all the more important.Lacking the budget to furnish and equip the tranquility room, the project was postponed.AMIT women volunteers decided to dedicate their annual Hanukka drive to the cause.Through their efforts they were able to purchase all the therapeutic games, cards, and toys that were needed, as well as school and art supplies for the children. Community representatives also collected new and gently used items to furnish the room.Ahead of Hanukkah, 20 volunteers from Beit Shemesh, Modi’in, and Hashmonaim arrived at the school with cars full of packages, toys, supplies and fun surprises and stocked the room with everything required to make use of it over the holiday.Bibsi Zuckerbrot, chairwoman of Development for AMIT, was among the nine women who volunteered from Beit Shemesh to deliver the therapeutic toys and supplies that their neighborhood collected for the AMIT Sderot Hanukkah drive.“Like many of the women who came from Beit Shemesh and other communities, this was my first time in Sderot,” she said.“Though it’s so close to where we live, we saw firsthand that their lives are so different from ours. We were all moved by the experience. These young AMIT children have spent many years living under rocket fire, so we hope that our contributions will help heal their emotional wounds,” Zuckerbrot said.