Analysis: How do US and Israeli police brutality compare?

Many US and Israeli cases of over-policing, cover-ups and weak prosecution of police involve elements of police racism, but that is only part of the story. 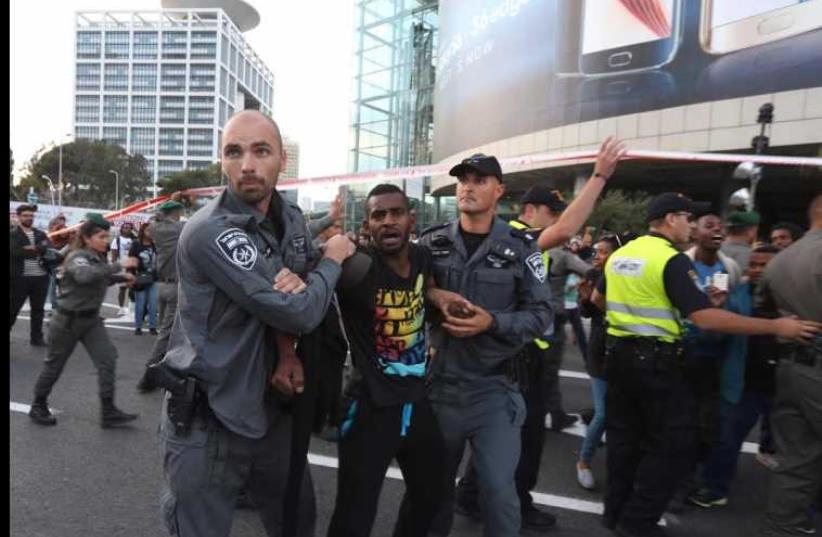 AN ETHIOPIAN-ISRAELI demonstrator is restrained by two policemen in downtown Tel Aviv on Sunday
(photo credit: MARC ISRAEL SELLEM)
Advertisement
It is difficult to get to the bottom of police brutality in countries with the complex racial divides of Israel and the US. Both have a number of racial and ethnic fault lines, but there is a focus on the rise in police shootings of African- Americans in the US and on police beatings here of Ethiopian Israelis and African migrants, as highlighted by the Public Defender’s report on Sunday.A key difference in terms of lethality should be noted at the outset when comparing US shootings to Israeli beatings; cases of shooting here tend to be connected with Palestinian terrorists more than with Ethiopian Israelis or African migrants.In one case cited in the Public Defender’s report, a policeman demanded that an Ethiopian Israeli identify himself and produce his identity card. When the Ethiopian refused, a physical altercation began in which an accompanying private security guard used pepper spray on the Ethiopian. The Ethiopian was charged with attacking a policeman, disturbing police work and threatening a police officer.However, the Hadera magistrate’s court that heard the case found that the policeman’s original demand to produce an identity card – without any probable cause of the man committing a crime – had been illegal. Noting that there was no underlying crime, the court criticized the police for using excessive force and pepper spray on a person because of friction that the policeman initiated for no apparent reason. The court further noted that the police failed to probe the policeman before indicting the Ethiopian.The report cites additional examples of “over-policing” poor people in public parks, and incidents of friction with officers in which the authorities failed to investigate complaints that policemen beat the accused without adequate reason.In some cases, the police even tried to use their failure to investigate the officer for beating the accused after a lengthy period as a reason why it was no longer possible to investigate – despite having indicted the person, who was complaining of being beaten, for fighting the police officer.The Public Defender concludes that systematic issues with police brutality and with lack of investigation of that brutality continue unabated despite years of reports flagging the issue.An August 10 US Department of Justice report on the Baltimore police department following the killing of African- American Freddie Gray under disputed circumstances while he was in police custody touches on similar issues. The report says that the Baltimore police have a pattern of making unconstitutional stops, searches and arrests.The US Department of Justice issued similar reports against the Cleveland police department in December 2014 and against the Ferguson, Missouri, police department in March 2015, noting the use of excessive force and of a system-wide failure to address or prosecute policemen who violate policy, even when the repeated violations are well-known and serious.Most policemen who shot and killed African-Americans in at best questionable circumstances have gotten off without even an indictment. One exception is Michael Slager, who was indicted for killing Walter Scott in May after video footage contradicted his police report.Another exception, also likely because there were videos of his treatment, is the Gray case, in which Baltimore policemen were prosecuted and indicted. The officers were ultimately acquitted of criminal charges, but the city paid millions to the Gray family in a civil wrongful death settlement, and there were allegations of attempted cover-ups in that aspect of the case, too.Many US and Israeli cases of over-policing, cover-ups and weak prosecution of police – acknowledged to some degree by Israeli Police Commissioner Insp.-Gen. Roni Alsheich and FBI Director James Comey – involve elements of police racism, but that is only part of the story.On July 7, five Dallas policemen were killed and another nine were injured by an African-American. On July 17, three Baton Rouge policemen were killed and another three were injured, also by an African-American. In 2013, 49,851 police officers were assaulted in the line of duty with over 29 percent getting injured.The Jerusalem Post is not aware of the Israeli police issuing similar statistics and there was little response to the Public Defender’s Sunday report, but Alsheich’s controversial statements reflected his belief that the police are confronted with more crime from the Ethiopian and African migrant communities than from other population groups.Both the US and Israeli police forces say they lack sufficient global information on the issue. Some recent studies have shown that having police wear body cameras reduces unnecessary friction and serious incidents.Whether the issue can be addressed by better educating police to prevent over-policing, by fighting racist notions, by using body cameras or some other solution, the Public Defender’s report confirms that the problem is ingrained and will not disappear by itself anytime soon.