The religious and secular public has become weary with constant rhetorical attacks by figures such as Rabbis Shmuel Eliyahu, Shlomo Aviner and others against liberal ideas and notions of pluralism. 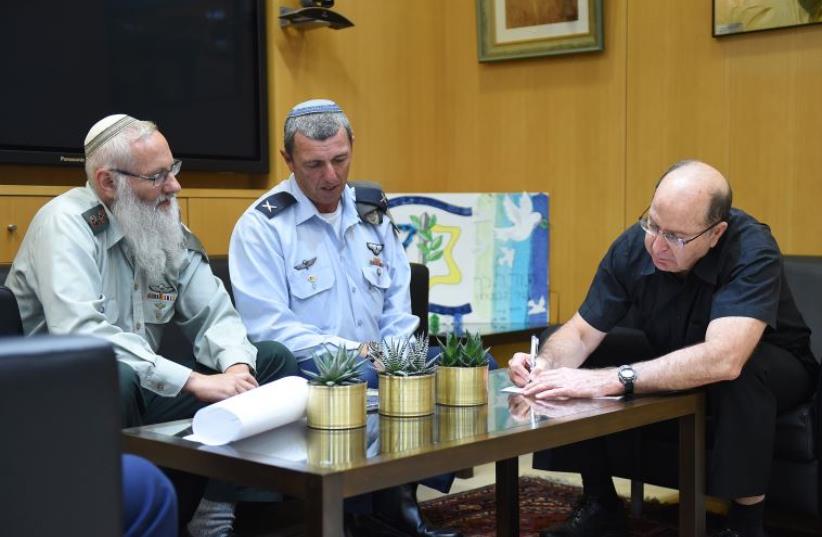 Rabbi Col. Eyal Karim (left), nominated to become IDF chief rabbi, sits next to his predecessor, Bri
(photo credit: DEFENSE MINISTRY/DIANA HANANSHIVILI)
Advertisement
In the wake of revelations about controversial views held by incoming IDF Chief Rabbi Eyal Karim, recent offensive remarks made about homosexuals and non-Orthodox Jews by another prominent national religious leader, Rabbi Yigal Levenstein, had a sense of deja vu about them.The phenomenon of increasing conservatism and religious zeal among elements within the national-religious sector has indeed been acknowledged for many years now.The religious and secular public has become almost weary with constant rhetorical attacks by figures such as Rabbis Shmuel Eliyahu, Shlomo Aviner and others against liberal ideas and notions of pluralism, and increasingly the progressive Jewish movements.According to Rabbi Yehuda Gilad, a yeshiva dean of the Ma’aleh Gilboa yeshiva and one of the leading figures of the Beit Hillel association of liberal national religious rabbis, the rhetoric used by Levenstein regarding homosexuals and the progressive Jewish streams is also nothing new.Many people have pointed in particular to the network of educational institutions under the umbrella or influence of the radical Har Hamor yeshiva and its graduates as being responsible for this shift.Indeed, Levenstein and the academy’s co-founder Rabbi Eli Sadan, recent recipient of the Israel Prize, are both students of Har Hamor president Rabbi Tzvi Tau.But what Levenstein’s comments have done is open up a window into what has been happening in the more radical yeshivas, pre-military academies and other educational institutes in this hard-line wing of the national religious movement.Gilad said he believed students at pre-military academies such as Levenstein’s in the Eli settlement undergo “indoctrination and brainwashing,” and had heard accounts of such methods from former students who studied in Ma’aleh Gilboa.He noted, however, that numerous rabbis and organizations, like Beit Hillel, have reacted strongly against Levenstein’s comments, and said that this was proof that a more moderate voice exists in the national religious community.Gilad argued it is the very existence of this more moderate approach and its growing activism that has led to a recent backlash from more hard-line elements who see the liberal national- religious approach as a threat and challenge to their world view.Moreover, he said the response of liberal elements to the antagonistic and offensive comments of Levenstein and others of late has shown the mainstream national religious community that there is an alternative to the radicalism that has being increasingly gaining swaa in recent years.Another notable result of Levenstein’s comments was the condemnation of them by Bayit Yehudi chairman Naftali Bennett, who criticized the rabbi’s remarks saying they did not reflect the true path of religious Zionism.Such a step will not endear Bennett to the hard-line wing of the national- religious community, which is already highly suspicious of him.But his comments perhaps reflect a reality in which it is becoming unacceptable in the mainstream national- religious world to speak in the way Levenstein did.The fact that Bennett can speak out against such a revered rabbi shows political leaders from the national-religious camp believe that they will not suffer politically from striking a blow for a more moderate, less zealous brand of religious Zionism.