Analysis: Stop and frisk terror law may not last even if it passes

Stop and frisk, meaning where a policeman stops someone on the street and can demand to review what objects they are carrying in their pockets or elsewhere. 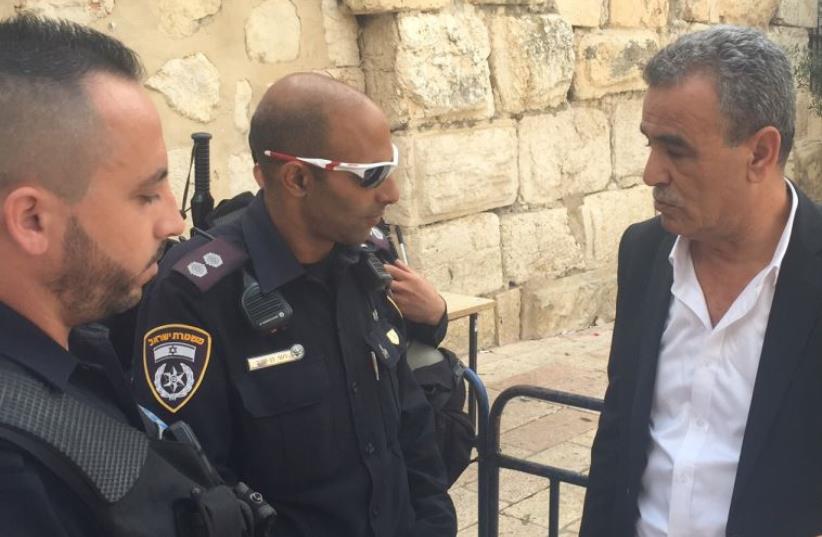 Zahalka with police officers banning him from Temple Mount
(photo credit: Courtesy)
Advertisement
If a new bill passes to grant police much wider discretion to stop and frisk people in areas considered high-risk targets of terrorists, it is unlikely to last much past whenever the current wave of violence ends.A version of the law, minus the terrorism provision and directed more at giving police wider stop and frisk discretion around certain club and bar areas with histories of outbreaks of violence, has been pushed forward by police for at least five years, but never made the cut because of privacy objections.Stop and frisk means a policeman can stop people on the street and demand to review what objects they are carrying in their pockets or elsewhere.The frisk can include searching parts of their body for hidden objects while their clothing remains on.Security-focused groups have praised stop and frisk for reducing crime in places like New York, for catching persons illegally crossing borders and for intercepting terrorists before they reach their targets.Privacy rights advocates have condemned it as a thinly veiled racial profiling program that leads to police systematically abusing minorities who they have biases against, with no real corresponding security benefit.One less discussed perspective on the current bill, noted by Hebrew University of Jerusalem Prof. Barak Medina is that it undoes 2005 reforms to standards for law enforcement’s searches of suspects, which were meant to bring the country more in line with other democracies.As the Association for Civil Rights in Israel notes, the European Court for Human Rights already declared in 2010 a similar policy attempted by England to fight terrorism as unconstitutional discrimination and violations of privacy.Outside of terrorism issues, the change is subtle, but meaningful.Before, a policeman needed “probable cause” that someone he searches is illegally possessing a weapon. Now, a “reasonable suspicion” that someone he searches is about to commit “a violent crime against another” would be enough. Yet in areas declared in danger of terrorism, there would be essentially no standard limiting searches.The bottom line is that the law’s intention is to legalize searches at a lower standard of suspicion, such that police could practically use racial profiling and other aggressive methods, which in the past have been declared unconstitutional to frisk people in danger areas.In 2013, a major decision by New York federal court Judge Shira Scheindlin essentially sidelined a long-standing police stop and frisk policy and required a wide array of changes having found systematic discrimination against blacks and Latinos.In September, after years of unsuccessfully battling the court decision, the New York police started issuing receipts to persons they searched as one of many controls (including standardizing of categories of facts justifying a search) on the policy.Medina noted that the last major Israeli High Court decision on the issue came in 2012.Part of that decision was throwing out a conviction against a man for illegal knife possession since the only basis that had existed for the policeman who frisked the defendant and found the knife on his person to search the defendant had been that he had a criminal record.According to current law, such a search without some more substantial visible fact to go on, could only be legal if there is a record that the suspect is being sought for arrest, not merely that they have a past criminal record.The new bill would likely blow through such limits and has no categorization or receipt controls to balance out the security versus privacy scale.In fact, the only limits seem to be what area and for how long (no limit specified) higher law enforcement officials declare as special areas for police to have the new added discretion for stop and frisk.All of this would seem to conflict with limits the High Court would likely set on police performing wide-ranging stop and frisk.In a March ruling, the High Court walked a tightrope by pressing Ben-Gurion Airport to liberalize aspects of racial-profiling it was using for security checks, but declining to declare such profiling unconstitutional.Here, there is no racial profiling on the face of the law, but courts in many countries have declared security policies discriminatory where the impact on the ground is discriminatory racial profiling and where the absence of limits on discretion for searches lends itself to discrimination.One possible scenario is the court waits to give a major ruling on the issue until the current wave of violence dissipates, purging the law books of the new added discretion, but waiting to do so until the general public is less up in arms for greater security measures.Another possibility is the court may throw out the part of the law expanding searches for clubs, while maintaining or requiring some controls for the law regarding terrorism.If any of the above occurs, that would fit a pattern in Israel and elsewhere in which security temporarily overtakes privacy during tense times, but is eventually rolled back once the situation calms down.