No major incidents of violence have taken place in the capital since Passover began on Monday. 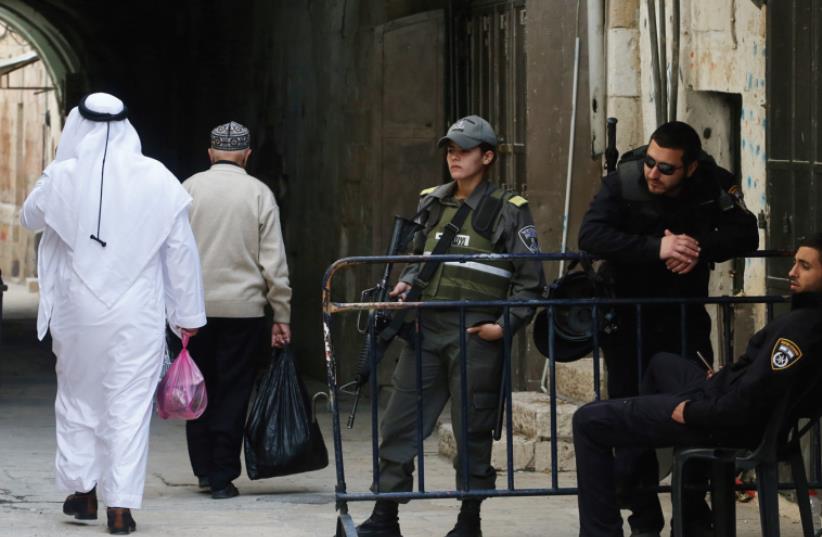 A SPLIT CITY: Two Arab men walk past police officers in the Old City of Jerusalem
(photo credit: MARC ISRAEL SELLEM)
Advertisement
Racist graffiti scrawled in Hebrew was found spray-painted on an exterior concrete wall in the Jerusalem neighborhood of Baka on Wednesday.Among the writings were, “Death to Arabs,” “Arabs go home,” “Revenge” and “Kahane was right.”“Kahane was right” refers to the controversial Jewish Defense League founder Meir Kahane, who was assassinated in New York City in 1990 after his radical Kach Party was outlawed in Israel for inciting hate.While police did not confirm or deny the vandalism, multiple Israeli news organizations reported the incident. Heretofore, there has been a relative lull in nationalistically motivated hate crimes by Jewish extremists.Following a spate of anti-Arab vandalism and violence in the West Bank and Jerusalem in 2014, Prime Minister Benjamin Netanyahu denounced the phenomenon as antithetical to Jewish values, and declared a “zero tolerance” policy.“We are determined to vigorously fight all manifestations of hatred, fanaticism and terrorism on either side,” Netanyahu said.“The battle against this phenomenon unites all of us. It is not a battle of one [political] camp or another, but rather an issue of basic human values that are the Jewish values under which we operate.”Soon after an emergency cabinet meeting was held, former police commissioner Yohanan Danino launched a nationwide campaign to crack down on the crimes.Additionally, the Education Ministry allocated NIS 1 million to increase dialogue and coexistence sessions between Jewish and Arab students.Meanwhile, security in the capital remains heightened, with over 3,500 officers on patrol in the Old City and other neighborhoods. Over 100,000 Jewish visitors are expected to pray at the Western Wall Thursday morning for the priestly blessing.More than 50,000 Christians are also expected to attend the Holy Fire ceremony at the Church of the Holy Sepulchre in the Christian Quarter on Saturday.No major incidents of violence have taken place in the capital since Passover began on Monday.