The IAA also denied Emek Shaveh’s claims that it also intended to transfer other historic relics to the new West Jerusalem facility. 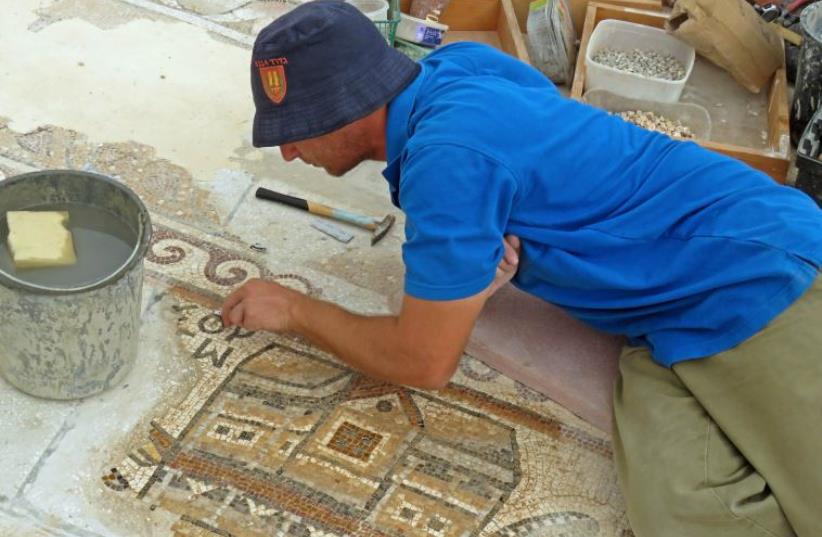 IAA workers conserve the rare mosaic
(photo credit: NIKKI DAVIDOV, COURTESY OF THE ISRAEL ANTIQUITIES AUTHORITY)
Advertisement
The Antiquities Authority on Thursday refuted claims by left-wing NGO Emek Shaveh that it plans to transfer east Jerusalem’s Rockefeller Museum’s library and rare relics to the western portion of the capital.The response comes one day after Emek Shaveh, a consortium of European-funded archeologists and activists, filed a petition to the High Court of Justice in an attempt to prevent the alleged transfer.According to the authority, the move has nothing to do with politics, but rather protecting the ancient books in a new state-of-the-art facility being built by the authority near the Israel Museum.“The Israel Antiquities Authority is building the National Campus for the Archeology of Israel in Jerusalem by the Israel Museum, which will include, among other things, a modern library,” the authority said in a statement.“IAA intends to transfer the Rockefeller Museum library books, most of which it acquired, to the new library. Some of the books require special climatic conditions, and the new library will be able to conserve them with advanced technologies.”Noting that Rockefeller Museum does not have a proper facility to care for the rare books, and that one cannot be built there due to the age of the museum, the Antiquities Authority said it has no other choice but to make the transfer.“The necessary conditions for keeping these books of historical importance do not exist at the Rockefeller Museum library and cannot be applied there,” the statement said.Moreover, the Antiquities Authority denied Emek Shaveh’s claims that it also intends to transfer other historic relics to the new facility.“The archeological finds stored at Rockefeller Museum’s existing structure will remain there, and there is no intention to transfer them to the archeological campus,” the statement said.