Around 200 people were present during the protest, which passed without a serious security incident. 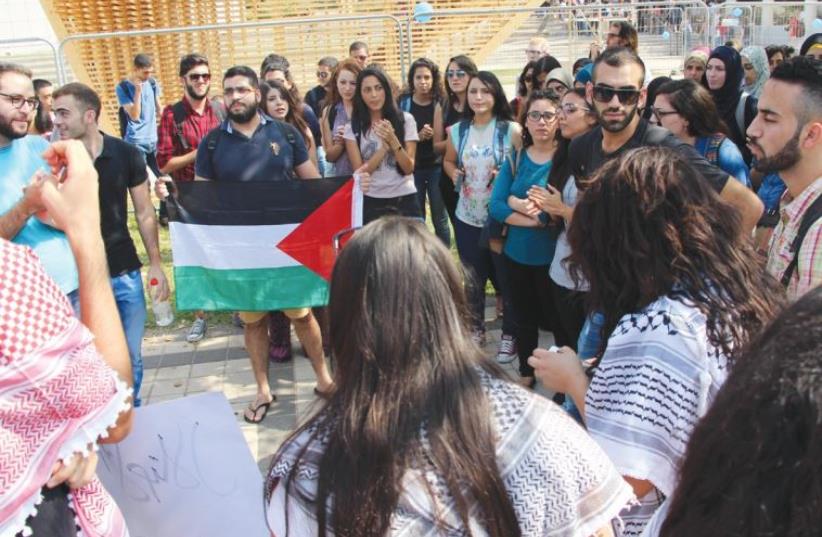 PRO-ARAB PROTESTERS display a Palestinian flag at the entrance to Tel Aviv University yesterday.
(photo credit: IM TIRTZU)
Advertisement
Israeli Arabs held a protest against “the daily executions against the daughters and sons of our Palestinian nation” by security forces at Entin Square in front of the main entrance to Tel Aviv University on Tuesday.The Im Tirtzu NGO, which describes itself as a “pro-Israel grassroots movement,” held a Zionist counter-demonstration, with its supporters waving Israeli flags.The Arab-Jewish Hadash party and other Arab groups helped organize the event.Around 200 people were present during the protest, which passed without a serious security incident.The flyer invitation passed out by the student protesters before the demonstration claimed that in the last month the government “changed the status quo with the Aksa Mosque.”Prime Minister Benjamin Netanyahu has rejected this accusation, saying in a speech to international Jewish leaders meeting in Jerusalem on Tuesday, “Israel has not and will not change the status quo. That [to suggest otherwise] is one huge lie.”The flyer also said that “the daily executions” were met with protests by Palestinians in Israel, the West Bank and the Gaza Strip.The government “is solely responsible for the spilled blood!” it stated.Alon Schvartzer, the head of policy at Im Tirtzu, told The Jerusalem Post that during these days of terrorism, “we need to allow the security forces to protect Israelis, both Arabs and Jews.”He said that Arab protesters chanted against Defense Minister Moshe Ya’alon: “Defense minister, how many children have you killed so far?” Tel Aviv University Prof. Shlomo Sand took part in the Arab protest, Schvartzer said.“It’s outrageous that students who study in a public university at the expense of taxpayer money, are inciting terrorism against Israeli citizens. The university should take action against the students involved,” he said.