Ariel Sharon refused to go to bomb shelter on 9/11

Sharon remained calm as he prepared for any eventuality of what could happen to Israel following the attacks in the US. 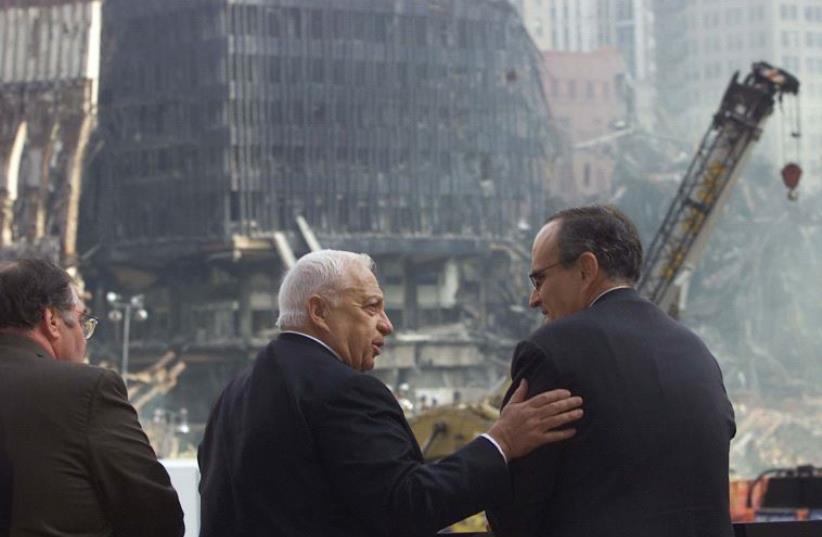 Israeli Prime Minister Ariel Sharon talks with New York City Mayor Rudy Giuliani as they look out over the wreckage of the World Trade Center attacks site in 2001, in New York.
(photo credit: REUTERS)
Advertisement
"This is a crazy country in a crazy world," Prime Minister Ariel Sharon told his senior adviser Erez Halfon on September 10, 2001. "There is no day when our schedule goes as planned."
Halfon, who is now deputy chairman of Nefesh B'Nefesh, promised his boss that the next day would be different, and by 3 p.m. Israel time on September 11, he told Sharon with pride that everything that day was going according to plan.
Less than an hour later, Sharon received a note from his chief of staff Uri Shani informing him that a plane had hit the first tower of the World Trade Center in New York. Sharon stopped a meeting of the security cabinet and went to a side room.
Shani was on the phone with New York mayor Rudolph Giuliani's chief of staff Bruce Teitelbaum when a plane hit the World Trade Center's second tower and the phone got disconnected.
Moments later, Shin-Bet security service agents rushed in and urged the prime minister to head down to a bomb shelter, because of concerns that a civilian airliner en route to Israel could have been hijacked.
Sharon refused to go to the shelter, but he did cancel a visit to Kiryat Malachi, where then mayor Lior Katsav was set to give him honorary citizenship, and instead prepared for any eventuality of what could happen to Israel following the attacks in the US."We got ready for the possibility of attacks on Israel," said Shani, who now advises Yesh Atid leader Yair Lapid. "We didn't know the extent of what was happening. There could have been planes taken over on the way to Israel. There was chaos in the US, and we didn't want to be on the way."
Air Force commander Dan Halutz asked Sharon for authorization to shoot down a plane perceived to be on the way to the Azrieli Towers or another sensitive location in Israel. He told Sharon that it was important to receive such authorization in advance because there would not be enough time if it happened.
"Sharon refused to give the order," Shani recalled. "He was so calm. He told [Halutz]: If there will be a problem come to me."  Israel was not attacked that day. But Sharon did not succeed in having a day go according to plan
"Do you see what I meant?" he told Halfon later on that day. "See how crazy Israel and the world are?"