The assumption Israel was coldly closing its doors to refugees has been proven wrong. 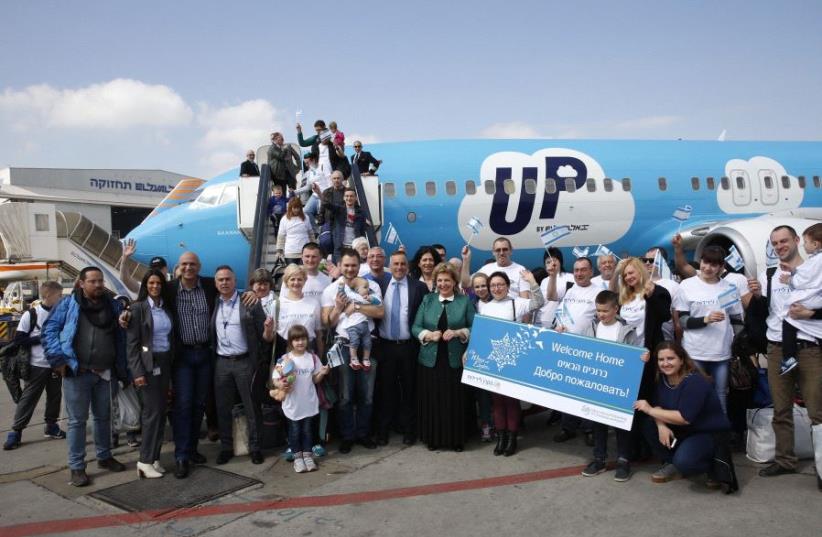 Tucked into a very pro-Israel speech delivered by EU Commissioner Ursula von der Leyen at Ben-Gurion University last week was one paragraph that didn’t get that much attention.

“I know that Israel has helped Ukraine with tons of humanitarian aid and a field hospital, and you have welcomed tens of thousands of Ukrainian refugees to your land,” she said.

So why does that innocuous sentence deserve attention? Because it goes against the feeling that inundated the land when the war in Ukraine first broke out that Israel was being callous and uncaring and miserly in its refugee policies.

In late February and early March, with the war in Ukraine in its early stages and refugees pouring across the borders looking for refuge, many in Israel clopped their chests for what they thought were the country’s twin sins regarding the refugees: not letting enough refugees in, and prioritizing refugees with Jewish ancestors.

One analysis in Haaretz was headlined: “Israel’s rejection of Ukrainian Refugees Shows that it’s the Darkness Unto the Nations.”

Diaspora Affairs Minister Nachman Shai added to the sense of the country turning its back on those in need by saying, “No other country has imposed limits on refugees.”

Shai exaggerated, but never mind, it was part of the general self-flagellation that gripped much of the country immediately after the war began and refugees started to flee.

Was Israel caught flat-footed, like most of the rest of the world, by the refugee crisis? Yes.

Was its immediate reaction, with refugees first asked to put down NIS 10,000 deposits upon entering and a cap of 5,000 refugees set, both callous and too little? Yes, but it was then corrected.

Israel corrected those policies to the extent that the EU commissioner gave Israel a shout-out for having “welcomed tens of thousands of Ukrainian refugees to your land.”

How many tens of thousands, exactly? As of June 15, 32,958 Ukrainians have entered the country, of which 5,888 are new immigrants, and another 4,730 are in the process of aliyah, bringing the grand total of Ukrainian immigrants to 10,618.

In addition, another 22,340 Ukrainians who are not eligible for immigration, meaning they are not Jewish or don’t have at least one Jewish grandparent, have come to the country. Nearly 8,000 Ukrainian nationals have left.

THE BOTTOM LINE: As of last week, some 33,000 fleeing the war in Ukraine arrived in Israel, and 25,000 still remain; twice as many refugees on temporary visas than those eligible for immigration under the Law of Return.

Had the US taken in a similar amount of Ukrainians relative to its population, it would have admitted some 1.2 million Ukrainian refugees. That is not even close to the situation, with US President Joe Biden setting a goal of admitting 100,000 Ukrainians.

In addition to the 25,0000 Ukrainian nationals who have come to Israel and remained since the outset of the war, another 20,000 Ukrainian workers here legally have been allowed to stay.

And all that is only part of the story. In addition to the Ukrainian immigrants and refugees, there has been a spike in both Russian immigrants and Russian visitors. In fact, more Russians have come to Israel since the beginning of the war than Ukrainians.

According to Jewish Agency numbers, since February 24, when the war started, 41,239 Russians have entered Israel, of which some 14,400 are new immigrants or in the process of becoming new immigrants. Another 19,000, according to figures presented earlier this month at the Knesset Labor and Welfare Committee, have left the country.

The influx of Russians is part of a greater trend of hundreds of thousands of Russians who have left Russia since the beginning of the war for a variety of reasons, including a clampdown on freedom of speech, overall uncertainty of what will be in Russia, and economic collapse. Some 15,000 Russian millionaires are expected to leave Russia by the end of 2022.

All told, as Aliyah and Integration Minister Pnina Tamano-Shata said last week, some 25,000 immigrants have come since the beginning of the war from Ukraine, Russia, Belarus and Moldova.

While 25,000 is a large number, it is not the pace that will bring 100,000 immigrants from Ukraine and Russia here by the end of the year, a number that was bandied about with much fanfare when the crisis first broke out.

Four months into Russia’s invasion of Ukraine, two popular assumptions made in the early days of the conflict have been proven wrong: that Israel is coldly closing its doors in the face of those fleeing the devastations of Russia’s invasion, and that Israel was on the cusp of a wave of immigration to rival numbers seen during the massive wave of Russian-speaking immigrants in the 1990s.