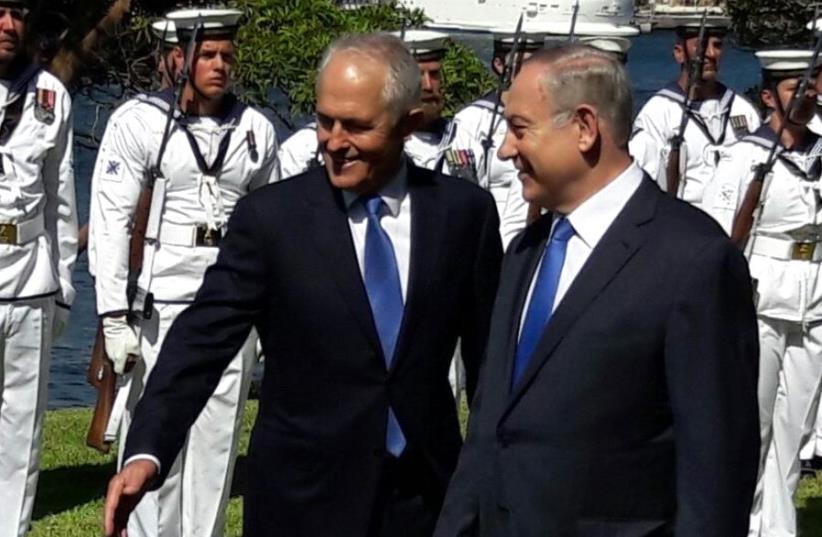 Prime Minister Benjamin Netanyahu (R) and Australian Prime Minister Malcolm Turnbull
(photo credit: HERB KEINON)
Advertisement
Eight months after Australian Prime Minister Malcolm Turnbull dedicated nearly two full days to hosting Prime Minister Benjamin Netanyahu in Sydney, he will be coming to Israel next month to take part in gala events marking the 100th anniversary of the Battle of Beersheba.New Zealand’s Prime Minister Bill English is scheduled to come at the end of October for the same event, but following elections there over the weekend it is not entirely clear whether he will be in power then.While English’s conservative National Party won the elections, the composition of the coalition government – and who will lead it – might not be known for weeks. The Foreign Ministry announced Thursday that Turnbull will arrive on October 28 and be here until November 1, and English is scheduled to come a day later and leave a day after Turnbull.This would be the first visit to Israel by a senior New Zealand official since June, when Jerusalem and Wellington patched over tensions and differences stemming from New Zealand’s sponsorship of the anti-settlement UN Security Council Resolution 2334 last December. Israel recalled its ambassador as a sign of protest.Netanyahu became the first serving prime minister to ever visit Australia when he went to Sydney in February, and one of the striking elements of that visit was the amount of time he and Turnbull spent in each other’s company. In addition, they made no less than four joint appearances.Calvary from both Australia and New Zealand took place in this pivotal Battle of Beersheba, a battle that was continuously referenced during Netanyahu’s stay in Australia.It was during that visit that Turnbull announced he would lead the Australian delegation coming to Israel for the commemoration of the battle where, as he put it then, the “Australian 4th Light Horse Brigade captured the town of Beersheba from the Ottoman Turks in the fading daylight of the 31st of October 1917.”The battle, in what proved a critical moment in the Palestine Campaign that led to an end to Ottoman rule of the country, was fought on the first day of the Palestine Campaign. From there ANZAC – Australian and New Zealand Army Corps – troops went on to march into Jerusalem, capture Tiberias, go to Megiddo and eventually take Damascus and Aleppo.While in Australia, Netanyahu called the battle “the last great successful cavalry charge in history.”Thousands of Australian tourists and World War I buffs are expected to take part in ceremonies commemorating the battle’s centennial.Former Australian ambassador Dave Sharma explained earlier this year that the battle resonates loudly with Australians because it was a major Australian success in the First World War. As much as the Battle of Gallipoli was a military defeat, the Battle of Beersheba was seen as a great success, with the Australian horse brigade turning the tide.WWI is a significant event in Australian history because it was the first time the country fought as an independent nation.A reenactment of the charge is planned during the commemorative events, and some 200 members of the Australian Light Horse Association are expected to attend.