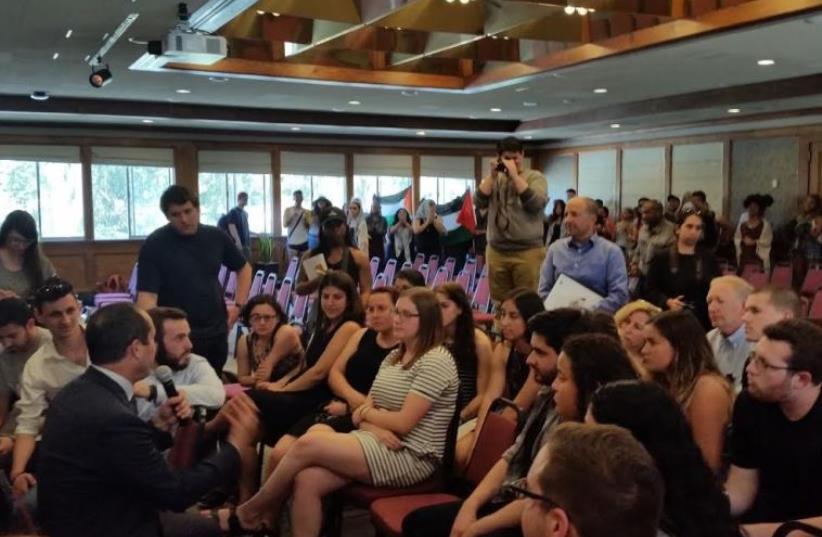 Anti-Israel protesters crash Jerusalem mayor Nir Barkat's (bottom left) talk at a San Francisco university
(photo credit: JERUSALEM MUNICIPALITY)
Advertisement
One year after being disrupted during a lecture at San Francisco State University by hostile anti-Israel protesters, Jerusalem Mayor Nir Barkat will return to the campus on Thursday to speak again with interested students.Last April, the protesters interrupted Barkat – who was on a US campus lecture tour to discuss Jerusalem and Israel’s policies, security and coexistence with Palestinians – with chants of “Intifada! Intifada! Long live intifada!” and “From the river to the sea, Palestine will be free!” Waving a Palestinian flag, the group was captured on video denouncing Israel as a “terrorist” and “apartheid” state, demanding that Barkat leave the campus.
Anti-Israel protesters crash lecture of Jerusalem mayor Nir Barkat in San Francisco , California , US in April 2016
Despite repeated attempts by the mayor to engage his student audience by answering their questions about Israel, a lack of security and general oversight by the university resulted in the lecture being cut short.Following the incident, Barkat issued a statement denouncing the incitement, adding that he spoke about the protesters’ “shameful conduct” with both the university’s president, Leslie E. Wong, and San Francisco Mayor Ed Lee.“Anyone who thinks that calls for violence and incitement will be able to silence us or divert us from our position is mistaken,” Barkat said.“We will continue to build, develop and strengthen the State of Israel, and within it, a united Jerusalem. And we will continue to voice our opinions and our legitimacy when we are invited to do so – even in places where they try to stop us,” he added.Hillel International’s vice president and general council, Tracy Turoff, condemned the university after the event, saying the administration abdicated its responsibility to allow freedom of speech and ensure a civil and safe environment for Barkat, and the students who attended his lecture.“The students and the faculty who came to hear Nir Barkat last night had a right to expect that their rights of free speech and academic freedom would be protected,” Turoff said.“The school had an obligation to also ensure academic responsibility, and they failed to do so... and we insist they take action and the necessary steps to deal with the perpetrators because the priority for Hillel is that students have a safe and respected environment for open conversation.”On Wednesday, the Palestinian Youth Movement criticized Wong’s invitation to host Barkat a second time, claiming the administration did not consult with student organizations first, and therefore “has undermined the Muslim, Arab and Palestinian presence on campus and demonstrated indifference regarding their safety,” the Golden Gate Xpress reported.“This invitation comes at the expense of respect and protection of students and staff who have faced long-term trauma since Barkat’s initial presence on campus in spring 2016,” the student newspaper posted on its Facebook page.“This invitation extended by university president Wong exposes his priorities for campus community, and that priority is not the students who pay increasing tuition and fees to be part of the campus community.”Wong was also rebuffed in a letter sent by the university’s Hillel student president, Sasha Presley, who accused him of a “reckless political stunt” for waiting to inform the group of Barkat’s visit until one week ago, without first consulting them.“I, along with many other students, will be at the event,” Presley said. “However, we are opposed to the president’s conduct and the lack of student involvement in bringing the mayor back.”Presley’s letter continued: “If you have a clear vision for creating a welcoming and inclusive climate for Jewish students on this campus, we want to understand what it is. Because, unfortunately, your actions are actively undermining Jewish student life, and enabling an environment causing actual discrimination against Jewish students.”Following last year’s widely publicized debacle, which was investigated by an independent law firm, Wong implemented a five-point plan to outline safety protocols regarding engagement with protesters.Barkat is scheduled to speak Thursday at the Seven Hills Conference Center at 10 a.m.Although the lecture is being touted by the university as “free and open to all students,” prior registration is required for entry.