The party used its veto power to ensure that Netanyahu - and future prime ministers - are immune from criminal investigations. 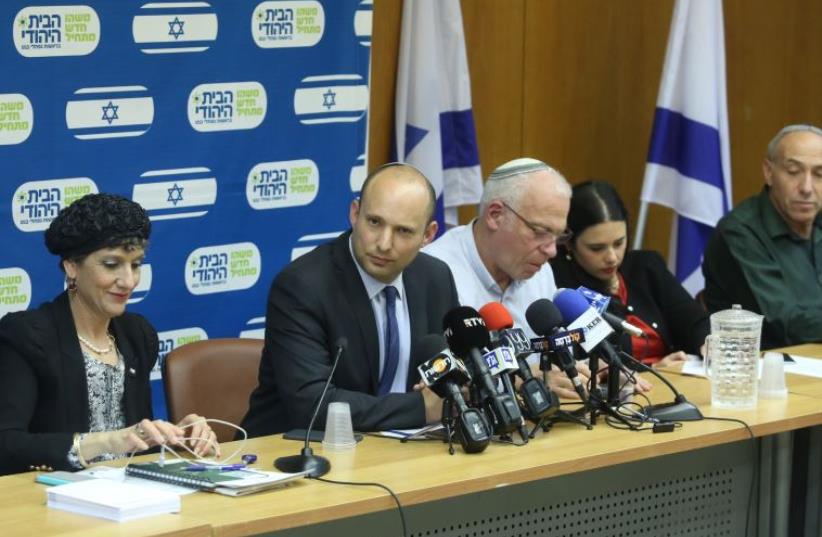 Bayit Yehudi MKs
(photo credit: MARC ISRAEL SELLEM/THE JERUSALEM POST)
Advertisement
Bayit Yehudi vetoed a controversial Likud push to give sitting prime ministers immunity from criminal investigations, in a letter to coalition chairman David Bitan (Likud) Wednesday.Instead, Bayit Yehudi agreed to support a Likud bill that would bar the police from giving a recommendation whether to indict or not, when it presents evidence to the attorney- general.Bayit Yehudi faction chairwoman Shuli Moalem-Refaeli wrote to Bitan that she seeks to exercise the veto power in the coalition agreement over any changes to Basic Laws.The bill in question is an amendment to Basic Law: Government, proposed by Likud MK David Amsalem, which outlaws a criminal investigation into actions by a sitting prime minister, with exceptions including crimes that endanger national security. It was nicknamed the “French bill” because it is based on a French constitutional provision.Bayit Yehudi lawmakers, including Justice Minister Ayelet Shaked, voiced reservations about the bill in recent days. Party leader Education Minister Naftali Bennett said that he’s undecided.“The Bayit Yehudi faction held a meaningful, in-depth discussion of the bill in our faction meeting on Monday,” Moalem-Refaeli wrote. “In the discussion there were significant disagreements between the faction members and no agreement was reached.... In light of the significant disagreements in our faction and in light of article 35 of the coalition agreement [allowing factions to veto Basic Laws], I ask not to bring this bill to a vote at this time.”The party’s decision comes after, earlier this week, Kulanu gave its MKs freedom to vote according to their conscience.Many of the Kulanu lawmakers were expected to oppose the “French bill.”Bitan vowed earlier this week to “go all the way” with the bill, but Bayit Yehudi’s decision may have finally killed it, although – in a gesture to Bitan – Moalem-Refaeli agreed to discuss it again in a month.Attorney-General Avichai Mandelblit has been vocal in his opposition to the bill this week, calling it absurd and warning that the Prime Minister’s Office will become a sanctuary for the corrupt.