Beachside litterers get their coastal comeuppance

The Environmental Protection Ministry deployed 15 inspection teams throughout the country’s seaside hot-spots, as part of the 2016 Clean Coast program. 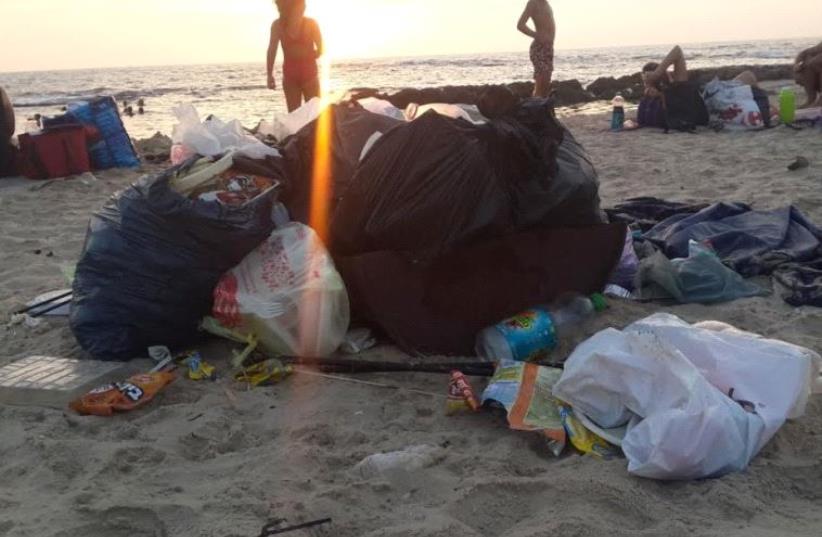 Litter on Mikhmoret Beach near Hadera.
(photo credit: ENVIRONMENT PROTECTION MINISTRY)
Advertisement
As Israelis flocked to the nation’s beaches this weekend to cool off from the August heat, Environmental Protection Ministry patrols tagged closely behind, catching litterers red-handed.The ministry’s Green Police and National Unit for Coastal Environment Protection, in collaboration with the Israel Police, the Israel Nature and Parks Authorities and relevant local authorities, deployed 15 inspection teams throughout the country’s seaside hot spots, as part of the 2016 Clean Coast program. From the country’s northernmost Mediterranean beaches to the Red Sea sands in the South, the teams singled out beachgoers for various environmental infractions.All in all, the inspectors dispensed eight fines for littering and issued two tickets for illegal driving on the sand, the ministry said. The teams visited the beaches at Mateh Asher North, Mateh Asher South, Kiryat Yam, Haifa South, Tirat Carmel, Atlit, Maayan Zvi, Hadera, Michmoret North, Palmachim, Nitzanim and Eilat.The Environment Ministry first launched the Clean Coast program in 2005, with the aim of eradicating the beach littering, particularly at unauthorized beaches that lack lifeguard facilities. The program is based on six, intertwined pillars: cleanliness, enforcement, publicity, education, monitoring of marine debris and reduction at the source, according to the ministry.At the end of May, the ministry renewed the annual budget for the program, this year allocating NIS 2.3 million for a variety of enforcement and educational needs.“The aim of the operation is to create a deterrence through enforcement activities against waste offenders on the beaches,” a ministry statement said.