“But that’s the way it’s always been.” 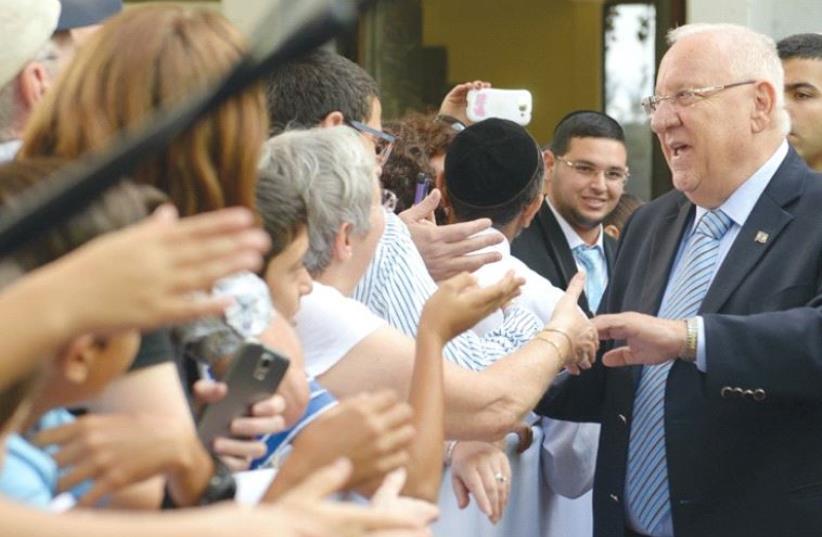 PRESIDENT REUVEN RIVLIN shakes hands with visitors at the President’s Residence.
(photo credit: ROY BERKOVICH)
Advertisement
If there was a single word to characterize this year’s Succot festivities at the president’s annual Open House, it was bedlam.Octogenarian David Gorenstein, who specially came from Givatayim, expected to find President Reuven Rivlin standing in the presidential succa shaking hands and greeting everyone who had accepted his invitation.“If I just had to see him from a distance and hear some general blah, blah as he addressed the crowd, I could have stayed home and watched him on television,” raged Gorenstein to a member of the President’s Office.“But there are just too many people,” she responded. “He can’t shake hands with everyone.”“Then he should have an open house for three days,” retorted Gorenstein. “He can’t invite the whole of Israel and have people travel long distances and for a long time – and they don’t even get to shake his hand.”“But that’s the way it’s always been,” she said.Actually that’s the way it’s been since she started working at the President’s Residence during the term of Shimon Peres.Before that, from Yitzhak Navon – who introduced the open house concept – up to and including Moshe Katsav, the president stood for hours in the succa shaking hands with each arrival, and posing for photos with groups and individuals.As it was, Gorenstein did get to shake Rivlin’s hand and even presented him with a children’s book on David and Goliath, which he had authored.