Residents to receive plots in nearby city, state land for agricultural projects. 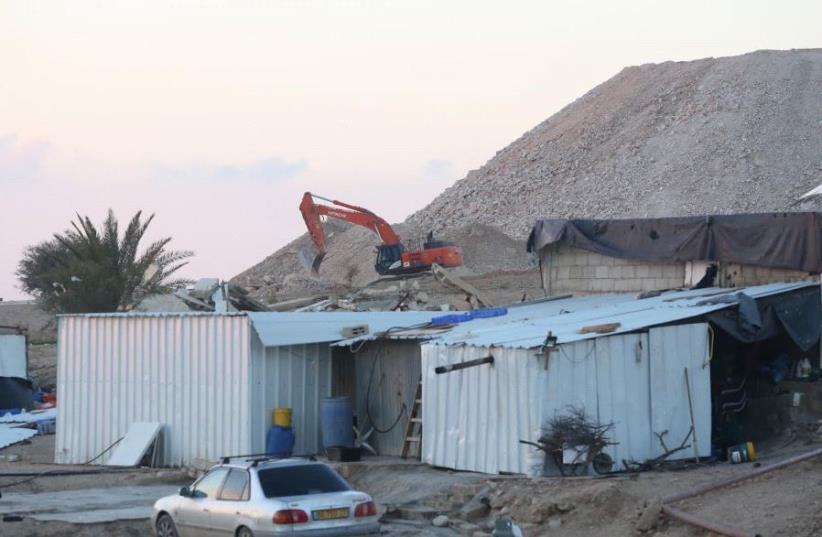 Umm al-Hiran
(photo credit: MARC ISRAEL SELLEM/THE JERUSALEM POST)
Advertisement
Most residents of the Negev Beduin village of Umm al-Hiran have agreed to the state’s demand that they relocate to the nearby town of Hura, officials and residents said on Wednesday.The agreement, reached three weeks before a slated forced eviction of all village residents, paves the way for establishment of a Jewish town in the vacated area.According to the agreement, Umm al-Hiran residents will move to their own neighborhood in Hura, with every family getting a lot upon which they can build a home. Residents will be compensated for their existing homes “in accordance with the customary rules in the Beduin sector,” a statement by the Authority for Development and Settlement of the Negev Beduin said.The agreement averts the need for renewed police evictions in Umm al-Hiran, more than a year after a controversial operation by police traumatized the village. On January 18, 2017, a pre-dawn house-demolition raid mounted by hundreds of police led to the deaths of a Beduin teacher, Yacoub Abu al-Kaeean, and policeman Erez Levi, in disputed circumstances.The demolitions, during which ten houses were leveled, were aimed at forcing residents to relocate to Hura on the state’s terms. Scared of a repeat operation, they will now be doing exactly that.“There were negotiations – and in the end they agreed to what was offered to them from the beginning,” Yehoshua Mor-Yosef, spokesman for the authority said on Wednesday. “When they understood that they don’t have a choice and that if they don’t reach an agreement by the end of the month they will be forcibly evicted, they folded. They didn’t have a choice.”Two hundred individuals signed the agreement, which calls for moving to a new neighborhood in Hura by the end of August, Mor-Yosef said. But 20 families refused to sign, he added. “We will continue talking to them but they won’t get anything more. If they aren’t convinced, they will be evicted on time.” Mor-Yosef said.Raed Abu al-Kaeean, who heads the local residents committee, told the Arabs48 website: “I am crying as I speak to you, after they coerced us into this agreement that removes us from Umm al-Hiran – where we have lived for 63 years – for racist reasons, to establish a Jewish settlement on the ruins of Umm al-Hiran,” Abu al-Kaeean added: “the agreement was signed at 2 a.m. after heavy pressure, in the presence of the southern police command and under threat that what happened on January 18, 2017, will happen again within days. We were forced to sign the agreement in order to safeguard the safety of the people so that things would not deteriorate and return to what happened in the past with bloodshed and killing.”IN THE VIEW of Umm al-Hiran residents, Yacoub Abu al-Kaeean was shot by police without justification as he was driving away from his home that was about to be demolished. They refer to his death as a “murder.” Police still adhere to their version of events, that he deliberately rammed Levi with his car in a terrorist attack.Raed Abu al-Kaeean criticized Arab leaders for, in his view, abandoning Umm al-Hiran residents to their fate. “We had no choice also because the problem was left to the people of Umm al-Hiran only,” he said.Village resident Ahmad Abu al-Kaeean, the brother of Yacoub, said: “This isn’t an agreement. An agreement is by choice – this is by force.”A 2015 Supreme Court ruling authorized the state’s plan to demolish Umm al-Hiran to make way for the new town of Hiran, which is to be populated by religious Jews. The court decision backed the authority’s view that the Umm al-Hiran residents are trespassers on state land.Critics of the government say forcing these Beduin to move may be legal, but it is not moral. They note that it is the second time Umm al-Hiran residents are being forced to relocate. In 1956, they were moved under military order and resettled by the IDF in their current location after being evicted from the Wadi Zbala area of the Negev where they had been living since before the establishment of the state. But they were never given title to the land at Umm al-Hiran.Raed Abu al-Kaeean had said in February that residents did not want to move to Hura because they are unwanted by those living there and fear that their relocation will start internecine fighting. “The neighborhood there doesn’t meet our needs. The residents there want it for themselves. We do not want to enter territory where there is a war,” he said.Beduin authority officials dismissed the idea that the Umm al-Hiran residents would touch off fighting by moving to Hura.Yair Maayan, head of the authority, said on Wednesday: “I congratulate the residents of Umm al-Hiran who have lived at the site for tens of years, and praise Umm al-Hiran leaders who displayed responsible behavior for the benefit of all the residents. The voluntary evacuation agreement and the move to neighborhood 12 in Hura that was developed especially for them will enable them to continue living [together] in a new neighborhood and will enable residents to benefit from high-level infrastructure, and services and quality of life available in Hura.”But Adalah, the Arab legal advocacy group that had represented the villagers in court battles, slammed the relocation. “Adalah sees the demolition of Umm al-Hiran and forced displacement of its residents as an act of extreme racism, embodying Israel’s colonialist land policies with the backing of the entire Israeli court system.Israel is moving forward with the destruction of Umm al-Hiran in a plan – reminiscent of the darkest of regimes such as apartheid-era South Africa – to build a new Jewish-only town on its ruins.“The recent negotiations over the eviction of Umm al-Hiran residents took place under the most extreme and patently illegitimate pressure from Israeli authorities, including the presence of police forces in and around the village,” Adalah added.