Palestinians and foreigners watch popular Palestinian band Apo and the Apostles perform at the Shepherds beer festival in Beit Sahur on August 19, 2017.
(photo credit: ADAM RASGON)
Advertisement
Some 4,500 Palestinians and foreigners danced to a mix of Arabic- and English-language music at a concert venue in the Bethlehem area on Saturday, while many firmly held on to a glass. Just meters from an IDF watchtower on the outskirts of Beit Sahur, a Christian-majority town, Shepherds, one of the largest Palestinian breweries, had kicked off its second annual beer festival.The festival is something of a unique event in the Palestinian territories, where many people do not consume alcohol in accordance with Islamic law. It featured a number of popular Palestinian bands, including Ta3lelah – that’s not a typo – and Apo and the Apostles, and popular Arabic foods, such as shwarma. And, of course, there was beer.Twenty-nine-year-old Alaa Sayej, founder of Shepherds, feels that beer and the Middle East go hand in hand, as the beverage is believed to have been invented in the region.“Why not make beer in Palestine when it comes from the Middle East?” Sayej asked, speaking on the sidelines of the festival.Beer was first produced in Sumer and Babylonia, located in modern-day Iraq, some 8,000 years ago, according to the Encyclopedia Britannica.Sayej initially brewed beer as a hobby in his dorm room while pursuing a dual master’s degree in finance and investment management in the United Kingdom in the early 2010s. 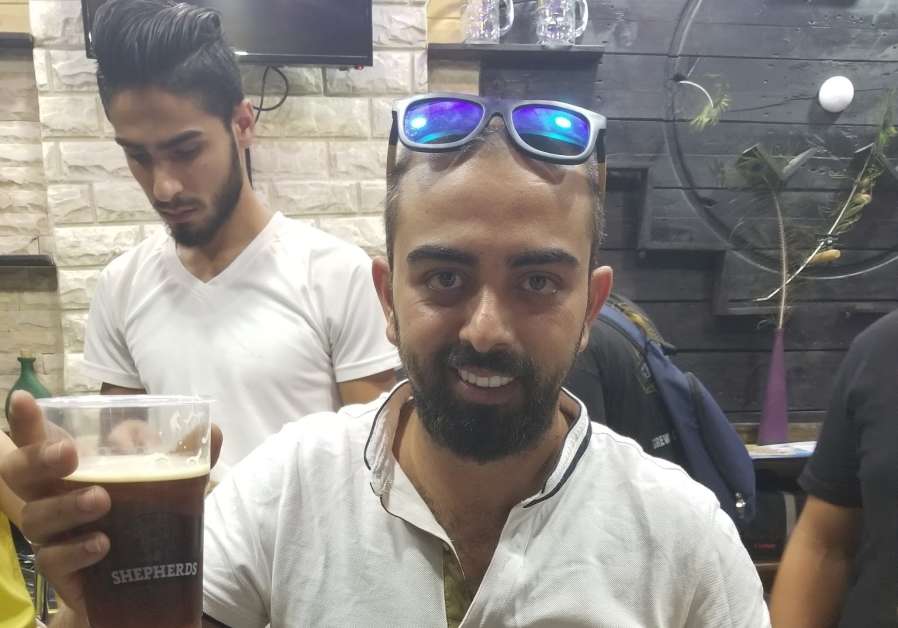 29-year-old Alaa Sayej at the Shepherds beer festival on August 19, 2019 (Credit: Adam Rasgon)
“I was fascinated by all the beers and ales sold in English bars. Every month, there was a new brew,” he remarked.In November 2013, after completing his degree, he established Shepherds in Bir Zeit, a university town north of Ramallah, where he was born and raised. But he did not start selling his product until June 2015 – according to Sayej, he faced a number of obstacles.Israeli customs authorities did not process the import of his brewing equipment in a timely manner, incurring hefty storage charges, and each Israeli supplier demanded that he purchase all of his ingredients from them, he said.Meanwhile, the Palestinian Authority’s Economy Ministry did not want to register his company because it said the logo – a fully-bearded shepherd with the Christmas star off in the distance – was the likeness of Jesus, according to Sayej.“I explained to them that it wasn’t a picture of Jesus,” Sayej stated, “but rather a shepherd with the [Christmas] star, which is a reference to the story of the wise men. When that story took place, Jesus was a baby, and there’s no baby” in the logo.Once he secured a meeting with then-economy minister Jawad Hirzallah, the PA approved the company’s registration. Today, the brewery employs 11 Palestinians on a permanent basis and produces hundreds of thousands of liters of beer each year. The product is delivered to outlets in the West Bank and east Jerusalem.  Shepherds previously sold its beers in Haifa, but following a disagreement with a distributor, it stopped. The company wants to renew its shipments to Israeli bars and is looking for a new distributor. It also plans to begin exporting to Italy, the United States and Chile in the coming weeks.Sayej, who tasted his first beer at the age of 17, said the beer festival was a part of a broader effort to provide Palestinians with opportunities to enjoy a nightlife.“We have a nightlife that is better than Tel Aviv,” he stated with a smile on his face. “Not many Israelis know that.”While it’s unclear whether the West Bank’s nightlife compares to that of Tel Aviv, a robust bar and club scene has been emerging in the Palestinian territories, mostly in Ramallah and Bethlehem.Back on stage, Apo and the Apostles took center stage. The crowd jumped up and down as the group sang many of its popular songs. It then performed “Lina,” its best known tune, as the crowd, overwhelmed with excitement, enthusiastically chanted out the name of the song.Ayoub, a 25-year-old resident of the Jerusalem neighborhood of Silwan who preferred not to give his last name, said he had experienced nightlife in Israel but enjoyed it more in the Palestinian territories.“I used to go to festivals in Tel Aviv, but I felt like I did not belong there,” he said. “Here, I feel like this is ours.”Twenty-five-year-old Wajd Abbas, from Kufr Aqab, a neighborhood in the northernmost part of Jerusalem, said that holding a beer festival in the territories showed that Palestinians were like people all over the world.“The outside sees the contradictions, problems and wars in our society,” Abbas said. “The beer festival is an opportunity for the outside to see we are normal people who love life and want to have fun.”