Behind the scenes: Awaiting Trump's arrival

Observers pushed through one and other to capture what will be remembered as a historic visit, for better or for worse, smartphones raised to the skies. 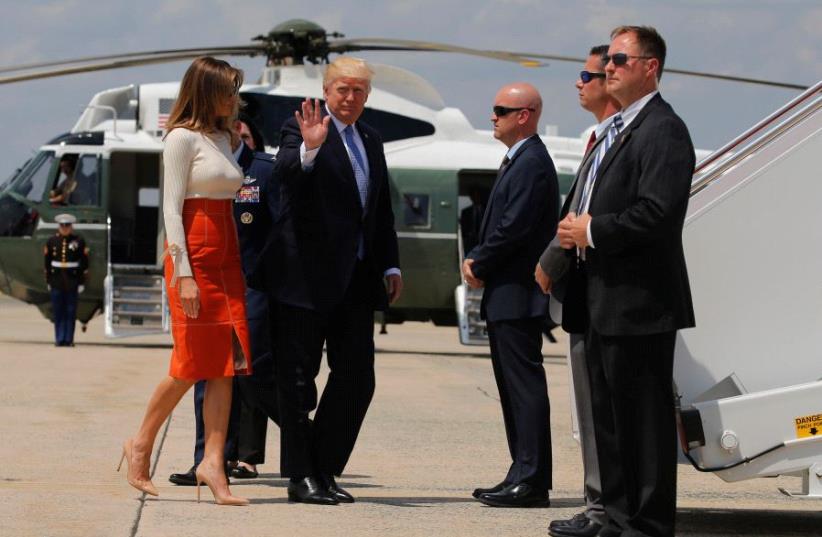 US President Donald Trump and first lady Melania Trump board Air Force One May 19, 2017.
(photo credit: REUTERS / JONATHAN ERNST)
Advertisement
Cramming into shuttle buses from Ben-Gurion Airport’s lowcost airline terminal, journalists, US Embassy staffers and other assorted guests slowly made their way to a red-carpeted tarmac Monday morning, hours before the scheduled arrival of US President Donald Trump.Several white tents surrounded the matching red velvet stage, where the president and his Israeli counterpart, Reuven Rivlin, as well as Prime Minister Benjamin Netanyahu, would later deliver short addresses and exchange words of friendship.In the distance, three US Marines helicopters circulated on the ground, getting into position for the anticipated arrival.With several hours to kill, the invited guests milled around the grounds, ducking under shade and grabbing water bottles in the blazing Middle Eastern sunlight. On a set of bleachers to the side of the main stage, reserved for ministerial and embassy officials, each seat offered a piece of swag – and sun protection – to guests: a white baseball cap with Israeli and American flags crossed at their poles, bearing an “Ever Stronger” slogan to honor the president’s visit.A duo of US Air Force officers leaned against one of the stage barriers, complaining of the smell of porta potties, as the winds grew warmer and more and more restless guests stopped by the portable latrines.Behind the bleachers, members of the IDF Military Band gathered inside one of the tents to tune their instruments and do some last-minute musical runthroughs.In a covered tent directly facing the still empty stage, dozens of journalists and photographers occupied the three narrow rows available to them, blocking each other with video equipment and battling for both white plastic garden chairs and interviews with ministers.Eager to have their voices heard about the Israeli-American relationship and the historic presidential visit, the ministers hopped from television station to newspaper to website, offering their thoughts in Hebrew and English.The Jerusalem Post was able to catch up with Science and Technology Minister Ofir Akunis, who discussed obstacles to Israeli-Palestinian peace.“Trump already declared that the settlements in Judea and Samaria are not the obstacles for peace,” Akunis said. “So what are the obstacles for peace? This time, the Palestinians themselves, because they don’t want to come to the negotiation table. We will come with open hands to the negotiation table without preconditions. This is the American policy, this is the Israeli policy, and we can work together.”Describing the alliance between Israel and the US as “strong,” Akunis said that this relationship will “remain strong and be much stronger in the next four years.”Jerusalem Affairs Minister Ze’ev Elkin, meanwhile, stressed the significance of the president’s choice to make Israel the second nation he visited on his first trip abroad.“You can, for example, compare it to the president who took some years to come to Jerusalem and to come to Israel,” Elkin quipped.While praising Trump for visiting Israel so soon, he also called upon the president to move the country’s embassy from Tel Aviv to Jerusalem.“It is very important to try to continue and try to bring the new American president not only to a declaration but to a real decision to move the American Embassy to Jerusalem,” Elkin said. “It’s the capital of the State of Israel. All of the meetings of the American president will be in Jerusalem, all of the activity of the ambassador will be in Jerusalem. It seems natural that the American embassy will be active from Jerusalem, and we are waiting for this – if not in this visit, then of course in the very, very close future.”While journalists continued to fight for a few moments with the ministers, the sound of incoming planes grew increasingly loud, as the first of two ultramarine blue planes appeared in the sky above and made its way to the ground.After a 15-minute wait, the second Air Force One plane landed on the tarmac – opening its doors to Trump and his wife, Melania – her red-and-white striped shoes matching his tie.Greeted by Netanyahu and Rivlin and their spouses, the couple walked down the red carpet, pausing as the military band played “The Star-Spangled Banner,” followed by “Hatikva.”Observers pushed through one another to capture what will be remembered as a historic visit, for better or for worse, smartphones raised to the skies.