Beit Jamal has been targeted in "Price tag" attacks in the past. 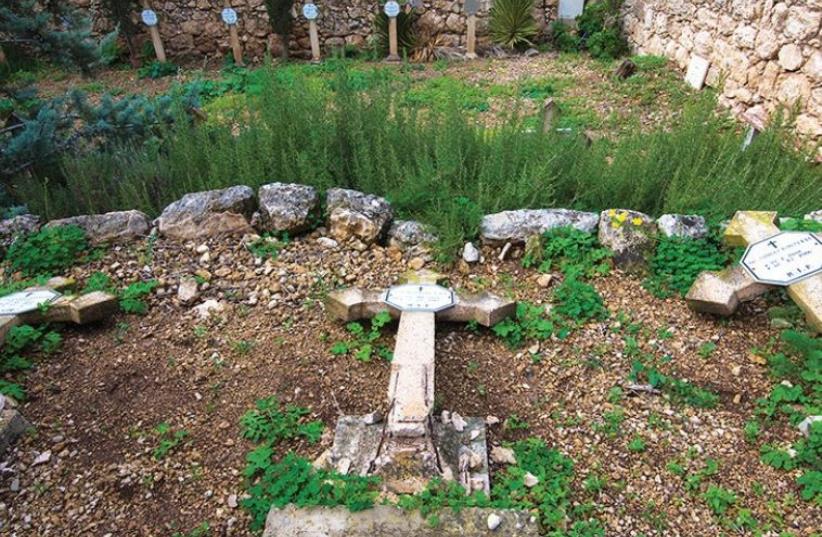 THESE CRUCIFORM TOMBSTONES were found knocked over at the Beit Jamal monastery, the result of one of several attacks against Christian sites in the Beit Shemesh area over the years.
(photo credit: LATIN PATRIARCHATE OF JERUSALEM)
Advertisement
A Catholic monastery close to Beit Shemesh has been vandalized for the second time in less than three years. Monks of the Salesian Order at the Beit Jamal monastery discovered dozens of cruciform tombstones knocked over the at the monastery last month and reported the incident this Saturday.The police said the incident was under investigation.“Salesian fathers responsible for the monastery in Beit Jamal reported that unknown persons desecrated their monastery’s cemetery... [and] that tens of crosses were destroyed,” the Latin Patriarchate of Jerusalem said over the weekend.“We condemn this incident and remind all that this is not the first of its kind committed in recent years, most of which remain registered as if committed by ‘unknown assailants.’ “Therefore, we urge the police, in specific, and the Israeli authorities, in general, to invest every possible effort to bring those responsible for these desecrations to justice as soon as possible.”The Latin Patriarchate continued, “We do hope that more efforts be made to educate all inhabitants of the country to respect each other despite their different religious backgrounds.”In August 2013, the same monastery was attacked with a firebomb, which caused minor damage, and the words “price tag” were spray painted on an exterior wall of the building. The cemetery was also desecrated in a similar incident in 1981.Several attacks have taken place against other Christian sites in the Beit Shemesh area in recent years, alongside a spate of assaults around the country against Christian holy places by suspected right-wing extremists who use the phrase “price tag” as a marker of their violent reprisals for government or Palestinian actions they oppose.In April 2014, the words “America is Nazi Germany,” “Mary is a cow,” and “Price tag” were spray-painted in Hebrew on the walls of the Deir Rafat monastery just west of Beit Shemesh.And in September 2012, the Latrun Monastery was the subject of an arson attack.The words “Jesus is a monkey” were daubed on one of the monastery’s walls, along with the names of two settlement outposts that were forcibly evacuated by the army.The American Jewish Committee also condemned the desecration of the Catholic cemetery in Beit Jamal and said it trusts that Israeli police will apprehend and bring to justice those responsible.“The Beit Jamal vandalism is an attack on Christianity and an assault on freedom of religion in Israel,” AJC international director of interreligious affairs Rabbi David Rosen said. “It is essential for Israel to do its utmost to prevent such odious acts and to punish the perpetrators.”Danielle Ziri contributed to this report.