From tug of war with Obama to Trump's warm embrace: Netanyahu heads for UN

Following the warm welcome Netanyahu received at the White House in February and Trump’s friendly visit to Israel in May, Monday’s meeting is expected to follow the same pattern. 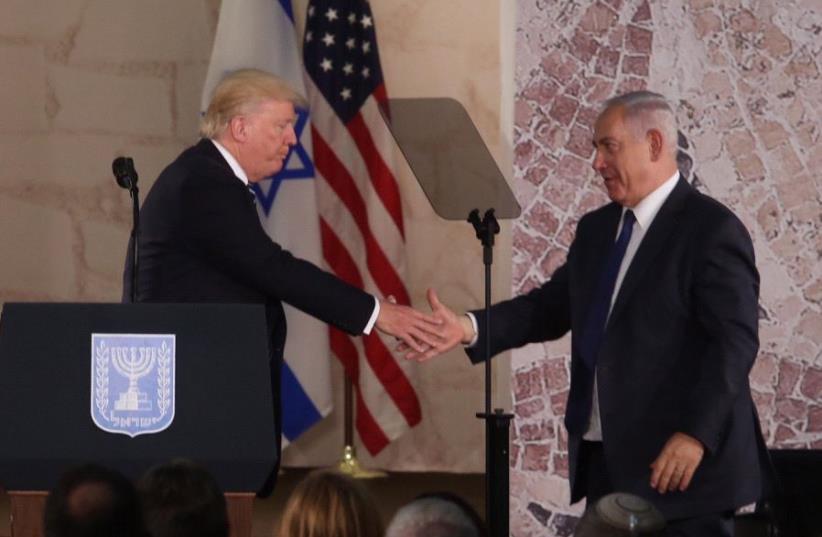 US President Donald Trump and Prime Minister Benjamin Netanyahu at the Israel Museum
(photo credit: MARC ISRAEL SELLEM)
Advertisement
NEW YORK – One of the most striking elements in the run-up to Monday’s meeting in New York between Prime Minister Benjamin Netanyahu and US President Donald Trump is the lack of the apocalyptic background noise that preceded almost every meeting between Netanyahu and Trump’s predecessor, Barack Obama.There was certainly a great deal of expectation of a boom about to be lowered when Netanyahu met Obama on the sidelines of the UN General Assembly meeting in September 2009.That meeting – which also included a brief trilateral meeting with Obama and Palestinian Authority President Mahmoud Abbas – came after months of US pressure on Israel to announce a settlement moratorium, an initiative that up until that meeting Netanyahu had rebuffed, at the price of constant and intense tension with Washington.That meeting took place after Obama had already unmistakably set the tone of his relationship with Israel by bypassing Israel on trips to the region that took him to Ankara, Riyadh and Cairo; by demanding a settlement freeze; and by talking about the need to put public daylight between the two allies.So, before the two leaders met at the UN in 2009, there was already talk about administration anger toward Netanyahu and a crisis in the works. That set a pattern that repeated itself for the next eight years. Almost every Netanyahu-Obama meeting was preceded by dire descriptions of their relationship, and of trouble ahead for the US-Israel relationship. The forecast was always stormy.Fast forward eight years to the scheduled meeting with Trump on Monday, which – as was the case with Obama – will take place on the sidelines of the president’s maiden address to the world body.The overall atmosphere and tone of the relationship between Jerusalem and Washington has changed fundamentally.It is not as if there are no disagreements – there are. But they are less about settlement policy and more about what needs to be done to keep Iran from setting up a permanent military presence in Syria when the civil war there ends.
Netanyahu: "I"ll talk security and peace with Trump" (credit: GPO)
But even those disagreements are for the most part kept behind closed doors, not aired publicly, as was the case with the Obama administration.In the run-up to Monday’s meeting, no one is writing about deep frustration in Washington with Netanyahu over the Palestinian or Iranian issues; nobody is discussing administration anger over Israel’s settlement policy; and no leaks have emerged of senior administration officials castigating Netanyahu or his government for its “recalcitrance.”That is not an insignificant shift.When Obama met Netanyahu in New York in September 2009, it was already clear to all the world leaders attending the UN General Assembly, that the Israeli premier was definitely not Obama’s favorite interlocutor – and that perception, which only deepened as the years passed, had negative diplomatic ramifications for Israel.One of the most important assets Israel has in its dealing with other countries is the perception of very close ties with Washington – of being America’s “favorite son.” If that perception is damaged – as it was in the Obama years – Israel loses out on an important asset.Granted, during the Obama years Israel still had massive support on Capitol Hill, but Netanyahu could not pull strings at the White House to gain favor for friends. Not only could Netanyahu not open doors in the White House for other countries during the Obama years, he could hardly open the doors there for himself.That has changed under Trump.Following the warm welcome Netanyahu received at the White House in February and Trump’s very friendly visit to Israel in May, Monday’s meeting is expected to follow the same pattern. And the world is both watching and taking note.The eyes of the world’s leaders will all be on Trump at the UN, and for many of them – according to a report in The New York Times that quoted Jon B. Alterman of the Center for Strategic and International Studies in Washington – “This is going to be their first chance to see him, to judge him and try to get on his good side.”And, yes, despite the unconventional nature of this president, the world’s leaders will want to get on Trump’s good side, because – after all – he still is president of the most powerful nation in the world.While some in the American Jewish community have expressed concern that Netanyahu has “tied himself to the hip” of a divisive US president, Netanyahu’s obviously close relationship with Trump – a relationship that will again be on full display at their meeting on Monday – gives Israel added value in dealing with countries that don’t enjoy such a strong relationship with the president, would like to and may look to Netanyahu to help them make it happen.