Analysis: With his back against the wall, Netanyahu goes on the offensive

The prime minister is concerned that attacks on his handling of the Gaza war will be used to undermine his position. 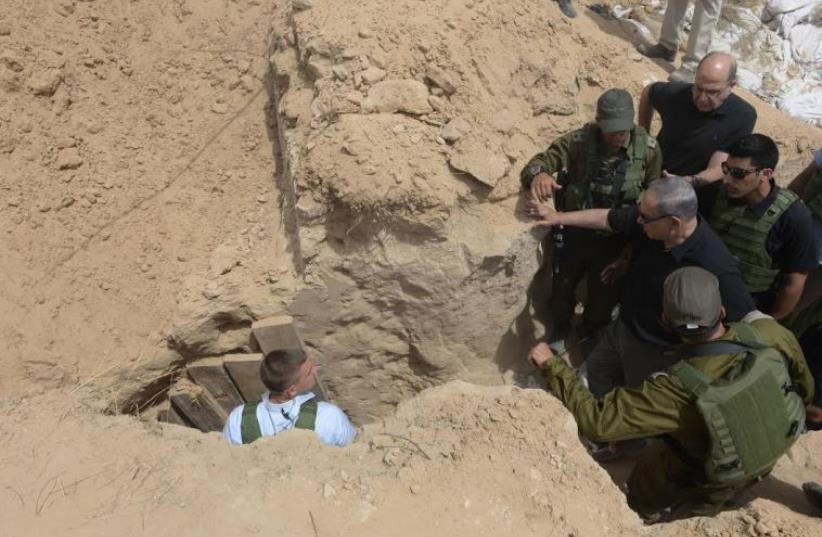 Prime Minister Benjamin Netanyahu visits the Gaza border, May 3, 2016
(photo credit: AMOS BEN GERSHOM, GPO)
Advertisement
Prime Minister Benjamin Netanyahu is not only concerned, he is worried and angry, which has led him to go on the offensive. He is concerned by the request of most of the bereaved families of Operation Protective Edge (50 out of 67) to establish a commission of inquiry into the government's functioning before and during the 2014 Gaza war. In addition to this request, which came as a surprise to the prime minister, the state comptroller's report on the war is expected to be published soon. A leaked draft of the report suggests that it will be critical of the government's and the IDF's preparations for the war.Netanyahu and his aides fear that the bereaved families' demand for an inquiry and the comptroller report will be used by ministers and MKs in the coalition and the opposition in order to attack him and undermine his authority and position, in particular when he also has a police investigation into corruption allegations hanging over his head.Therefore, the prime minister held a nearly three-hour briefing with military reporters and analysts on short notice Monday. He laid out before us his strategic viewpoint on Israel's situation, the challenges facing the country, the threats against it and its capabilities to face these threats. However, the bulk of the conversation was spent on the prime minister's attempts to deflect the bereaved families' criticism. As a bereaved brother himself, Netanyahu understands how sensitive an issue it is to argue with such families and to thwart the comptroller report and similar criticism voiced by ministers such as Naftali Bennett and Avigdor Liberman.Convening the military correspondents was a smart move by Netanyahu. It was intended to give more "professional" weight to his claims than they would have had if they were conveyed through political or diplomatic correspondents.The prime minister spoke at times with excitement and at times in anger, accompanied by fist-banging on the table. He presented data and quotes which sought to prove that the government, the cabinet and he personally took the Hamas tunnel threat seriously, as well as the group's other military capabilities - rockets, naval commandos and aerial vehicles. In the seven months prior to the war, between November 2013 and July 2014, the cabinet met eight times, almost a third of all of the forum's meetings in that period, to discuss the tunnel threat. The prime minister also toured the frontlines and held discussions with Gaza division commanders. The cabinet heard situation reports from IDF commanders and senior Shin Bet (Israel Security Agency) officials on the subject. At the conclusion of some of the meetings, decisions were made and orders were given, including by Netanyahu himself to the IDF and the defense establishment to prepare militarily for the tunnel threat and to develop technology to thwart it.In these cabinet meetings, as well as in other forums, there was an intelligence-based estimate that Hamas had dug at least 20 tunnels into Israeli territory. In The Jerusalem Post's sister publication, Ma'ariv Sofshavua, I published in October 2013 that the IDF had even estimated that there were some 30 tunnels (during Operation Protective Edge 31 tunnels were uncovered and destroyed). If I knew about the threat, then the IDF and the cabinet definitely knew about it. Therefore, in this respect, the prime minister is right. The claims that the cabinet was not informed, or that the IDF did not know, are baseless. It is true that the defense establishment (and this is also Netanyahu's responsibility) could have prepared better technologically and started to more quickly look for a solution if they would have listened years ago to the warnings of the geologist Col. (Res.) Yossi Langotsky. The solutions that are now being applied to the fight against tunnels are exactly what Langotsky suggested ten years ago, but nobody listened.The prime minister, (and then-defense minister Moshe Ya'alon) managed the war in the correct manner - carefully and calmly, while setting reasonable goals that took into account an exit strategy for the war. Netanyahu's strategy was to avoid mass casualties on the Israeli side and to minimize the harm done to the civilian population in Gaza, while delivering a harsh and painful blow to Hamas without agreeing to any of the group's demands.If the prime minister will be wise enough now to make the decision to prevent a humanitarian disaster in Gaza - the establishment of a seaport is the required step - chances are that the danger of another war will be pushed back several more years, and in retrospect, we will be able to say that Operation Protective Edge achieved good results for Israel.