Netanyahu flies to Thessaloniki for trilateral summit with Greece, Cyprus 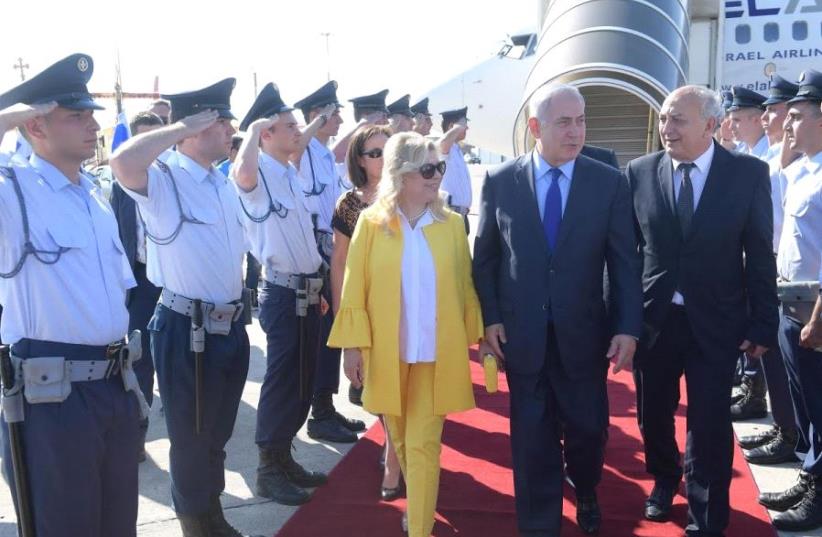 Prime Minister Benjamin Netanyahu and his wife Sara arrive in Thessaloniki, Greece
(photo credit: AMOS BEN-GERSHOM/GPO)
Advertisement
In a sign of Israel’s rapidly developing ties with Greece and Cyprus, Prime Minister Benjamin Netanyahu flew Wednesday afternoon to Thessaloniki for the third summit in 18 months with the leaders of both nations.Before boarding the plane, Netanyahu told reporters that the summit is part of Israel’s efforts to “enhance relations between Israel and many countries in the world.” The trip is taking place less than two weeks after he attended a summit in Liberia attended by the leaders of 15 West African nations.Netanyahu praised the decision by the Swiss parliament to require its government not to finance NGOs that foster hate, racism, incitement and antisemitism. He also commended the Dutch government for its decision to stop financing the Palestinian NGO that extols the memory of the female terrorist who led the Coastal Road Massacre in 1978 and to reconsider funding to other Palestinian NGOs as well.The Swiss and Dutch moves, Netanyahu said, follow similar steps already taken by Norway and Denmark and is an example of Israeli diplomatic efforts “bearing fruit.”Netanyahu said the summit in Thessaloniki will focus on innovation, energy, security and strategic cooperation, economic matters and tourism.The first trilateral summit took place in January 2016 in Nicosia, Cyprus, followed by a second one in Jerusalem in December.Thessaloniki was selected as the site of the meeting because of the Jewish history there – most of the community’s 60,000 Jews were deported and killed after the Nazis occupied Greece in 1941.Salonika-born Moshe Ha-Elion, who lit a torch at Yad Vashem on Holocaust Remembrance Day two months ago, was originally scheduled to join Netanyahu, but had to cancel because of health issues. Instead, his daughter and son joined the delegation.Also joining the delegation to hold meetings with their counterparts are National Infrastructure, Energy and Water Minister Yuval Steinitz; Science, Technology and Space Minister Ofir Akunis; and Economy Minister Eli Cohen.In addition, Jewish Agency head Natan Sharansky few with Netanyahu and will hold meetings about a plan to bring 30 students studying hi-tech – 15 each from both Cyprus and Greece – for six-month internships in Israel. This is based on a Jewish Agency program called Israel Tech Challenge that brings dozens of Jewish students each year for internships and training in hi-tech and cybersecurity.Sharansky will also discuss a plan with Greek officials for a Birthright-type trip for Jewish and Greek students in the US to bring them to Greece and Israel. The overarching idea behind the plan is to strengthen the relationships between the two diasporas.