Netanyahu: I look forward to talks with Trump to advance peace

During a meeting with the Romanian PM the day after Abbas met Trump, Netanyahu reiterates Jerusalem's positive inclination to step up approach to peace talks. 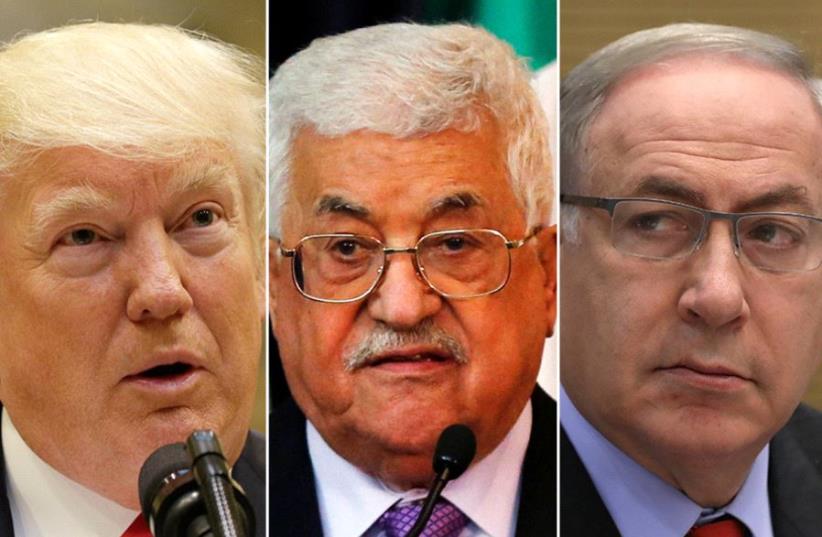 Trump Abbas and Netanyahu
(photo credit: REUTERS)
Advertisement
Prime Minister Benjamin Netanyahu on Thursday said he looked forward to talking with US President Donald Trump about the best way to advance peace between Israel and the Palestinians.He spoke just one day after Trump announced the start of a new peace process during a joint press conference with Palestinian Authority President Mahmoud Abbas in Washington. The US president is due to visit Israel later this month.A desire for peace is something Israel "fervently shares with the President."But Netanyahu objected to the comments Abbas made the day before."I heard President Abbas yesterday say that Palestinians teach their children peace. That's unfortunately not true. They name their schools after mass murders of Israelis and they pay terrorists," he said.
Netanyahu hails "new day" in Israel-US relations after meeting with Trump (credit: REUTERS)
"But I hope that it's possible to achieve a change and to pursue a genuine peace. This is something Israel is always ready for. I'm always ready for genuine peace," Netanyahu said.The premier made the remarks during a meeting with Romanian Prime Minister Sorin Grindeanu in Jerusalem. He also stated that discussing an approach to advancing peace talks was a priority that both the government in Jerusalem and Trump seek. "This is something we fervently share with the President."Prime Minister Benjamin Netanyahu and his Romanian counterpart Sorin Grindeanu meet in Jerusalem, May 4, 2016 (Kobi Gideon/GPO)Meanwhile in Brussels, Regional Cooperation Minister Tzachi Hanegbi (Likud) was expected on Thursday afternoon to attend a high-level meeting — the Ad Hoc Liaison Committee — with representatives from the PA, the European Union, the United States and the United Nations.The annual spring meeting, which coordinates donor funding to the PA, will be hosted by High Representative of the European Union for Foreign Affairs Federica Mogherini and chaired by Norwegian Foreign Minister Borge Brende. On the sidelines of that meeting, US special envoy Jason Greenblatt is expected to update Hanegbi on Trump's talk with Abbas in Washington.On Wednesday night, Deputy Foreign Minister Tzipi Hotovely (Likud) dismissed Trump’s announcement of a new peace process.“Abu Mazen [Abbas] arrived in Washington as he continues to transfer money to the families of terrorists. It’s clear to anyone who is intelligent that Abu Mazen isn’t interested in peace,” Hotovely said.Those payments, along with incitement in Palestinian textbooks, prove that Abbas is not interested in striking a deal with Israel, Hotovely added.She also took issue with Abbas’s call for Israel to end the “occupation.” “The nation of Israel isn’t an occupier in its land. We have been deeply rooted to our land for 3,000 years and we will continue to settle the land,” she added.In Israel, a skeptical MK Shuli Moalem-Refael (Bayit Yehudi) said the idea of a two-state solution had long been dead.“Only the obsession remains," she said.“Trump can’t achieve anything here beyond cocktail chatter with Israelis and Palestinians diplomats,” Moalem-Refaeli said.The PA doesn’t want peace or an agreement, she added.MK Omer Bar Lev (Zionist Union) immediately offered Netanyahu the support of his party from the opposition for any measures he would need to take in moving forward with the peace process.MK Erel Margalit (Zionist Union) called on the Left in Israel to put forward its own initiative to resolve the Israeli-Palestinian conflict rather than wait for Trump to be its “messiah.”Former Israeli foreign minister MK Tzipi Livni (Zionist Union) told Israel Radio on Thursday that  she also opposed payments to the families of Palestinians terrorists.But Trump was serious about wanting peace and that there was enough support for it in the Knesset, she said. If Netanyahu wants, he could take "dramatic" steps and pass a peace deal, she said."We have an obligation to try to make peace," she continued.To those who feel that Abbas is the problem, she went on to add, Abbas does not increase the chances for peace, he decreases them."There is a president who wants a deal, one that can't be painted as anti-Israel," Livni said.