After election day, relieved Israelis welcomed Macron’s election to the French Presidency as a victory for democracy and a defeat for antisemitism. 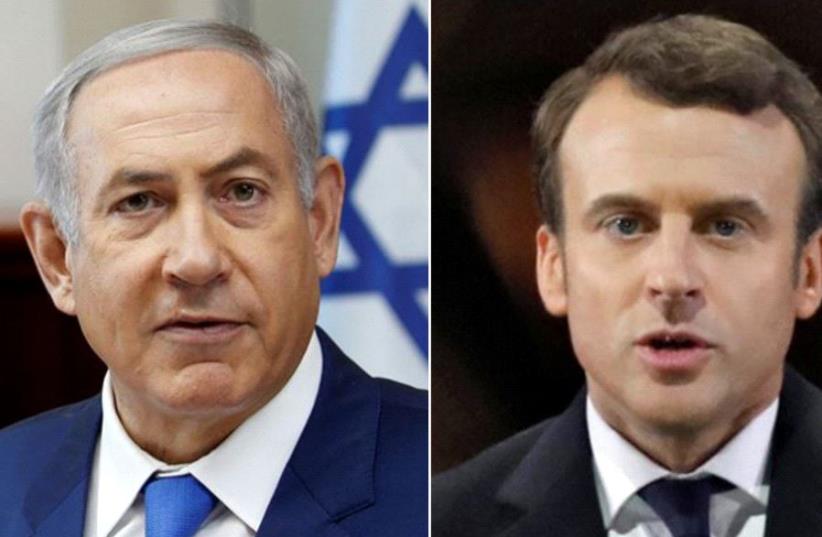 PM Netanyahu and French President Macron
(photo credit: REUTERS)
Advertisement
Prime Minister Benjamin Netanyahu and French President-elect Emmanuel Macron agreed to "meet soon" in a phone call the two leaders held Monday, just one day after the French elections."The two leaders discussed... continued cooperation in the fight against terrorism and advancing bilateral economic and technological links. French President-elect Macron thanked Prime Minister Netanyahu," the Prime Minister's Office said.Throughout the day, relieved Israelis welcomed Macron’s election to the French Presidency as a victory for democracy and a defeat for antisemitism and racism. They had feared that French voters would favor the right-wing politician Marine Le Pen.In a congratulatory letter to Macron, President Reuven Rivlin wrote: “I want to thank you for your strong stance against antisemitism, and all forms of racism, which have once again raised their ugly heads around the world.” “Standing up to such voices of intolerance and hatred, defending our citizens against vicious acts of terror, is a task of paramount importance that stands before us all, and Israel is your partner in this mission,” he said.According to data from the French Embassy, 96% of the French citizens in Israel who voted on Sunday supported Macron, with only 4% casting votes in favor of his right-wing opponent Marine Le Pen. But only 15% of the 57,737 eligible voters cast their vote.France keeps a separate count for its citizens living in Jerusalem and the West Bank, including in the settlements and in Ramallah. In these locations, the data was similar, with 95% voting for Macron and 5% going for Le Pen. Twenty-one percent of the 16,485 eligible voters cast their vote.Upon hearing of Macron’s victory, MK Shelly Yacimovich (Labor) said “French democracy won and antisemitism was defeated. In a world that has experienced manifestations of extremism and racism, Macron’s election reinforces moderation and sanity and strengthens the European Union.”“His overwhelming victory is good for France, for Europe, for the world and for the relationship between Israel and France,” Yacimovich added.Prime Minister Benjamin Netanyahu said, “I look forward to working with President-elect Macron to confront the common challenges and seize the common opportunities facing our two democracies.“One of the greatest threats facing the world today is radical Islamic terror which has struck Paris, Jerusalem and so many other cities around the world. France and Israel are longtime allies and I am sure that we will continue to deepen our relations,” the prime minister added.Deputy Foreign Minister Tzipi Hotovely immediately sent out a congratulatory tweet in English which read: “Looking forward to continuing Israel’s close relations with France.”But MK Oren Hazan (Likud), who had supported Le Pen, said he was concerned about what this meant for the battle against terrorism and Islamic extremism.“I hope that the new president Macron... will know how to deal with, and fight with a strong hand, radical Islam and growing global terrorism,” Hazan said.Aside from the larger issues of democracy and terror, Israelis are also hopeful that Macron will strike a more moderate tone when it comes to the Israeli-Palestinian conflict. Under his predecessor, President Francois Hollande, France had threatened to recognize a Palestinian state should the Israeli-Palestinian peace process remain frozen. It had also tried to advance its own peace process, which Israel feared would impose unilateral conditions that would prejudice any future Israeli-Palestinian talks.In a conversation with reporters, former Israeli ambassador to France Yehuda Lancry said Macron favored recognition of a Palestinian state only as part of the conclusion of final status agreement with Israel. Lancry added that he did not think that Macron would automatically follow in Hollande’s footsteps with regard to a separate French peace initiative.