Netanyahu has taken great pains to remain outside of this campaign, especially following his experience during the last campaign, when the widely accepted perception was that he favored Mitt Romney. 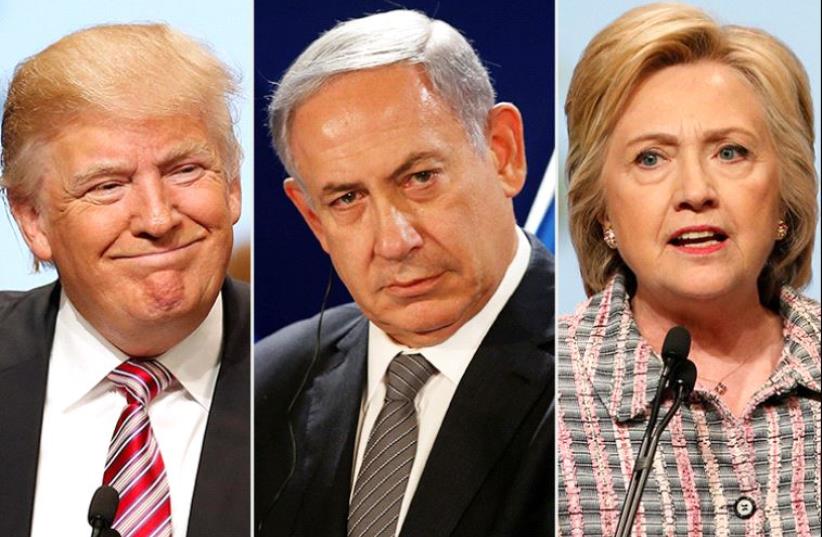 Trump Netanyahu and Clinton
(photo credit: REUTERS)
Advertisement
If the US presidential candidates don’t come to Jerusalem during the heat of the campaign, Jerusalem will come to them.Prime Minister Benjamin Netanyahu is scheduled to meet separately in New York on Sunday with both Democratic candidate Hillary Clinton and Republican nominee Donald Trump. The meetings are scheduled to take place just a day before the two candidates square off for their first presidential debate.Netanyahu made clear earlier in the week his interest in meeting both candidates, and this was followed by a telephone conversation with the Trump camp that dealt with the logistics of a possible meeting. After it became clear that there was interest in a meeting, Netanyahu’s office turned to the Clinton camp, which also expressed interest.Only after both camps consented was it agreed that the meetings would take place, so as not to present in any way the perception of the prime minister favoring one candidate over the other.Netanyahu is expected to ask both candidates to come out publicly against any attempt by the UN or any other international organization to impose a settlement on Israel. This comes in light of concern that Barack Obama, in the twilight of his presidency, may either support or even initiate a new UN Security Council resolution on the conflict.This was the first time since 2004 that at least one of the two major candidates did not come to Israel in the period between the party conventions and the national election.Netanyahu has taken great pains to remain outside of this campaign, especially following his experience during the last campaign in 2012, when the widely accepted perception was that he favored Republican challenger Mitt Romney over Democratic incumbent Obama.Netanyahu hosted Romney for dinner in the summer of 2012 in Jerusalem, leaving many with the impression that he supported the Republican.In the summer of 2008, when Obama was the Democratic presidential candidate, he also came to Israel and had dinner with then-prime minister Ehud Olmert.Trump had intended to visit Israel in December, but called that trip off shortly after Netanyahu joined many others around the world and rejected Trump’s comments about the need for the US to institute a “total and complete shutdown of Muslims entering the United States.” A total of 37 MKs, including two from the coalition, signed a letter at the time calling on the premier to cancel his planned meeting with Trump.Netanyahu’s aides stressed then that the prime minister “absolutely did not” ask Trump to cancel his visit. Trump announced the postponement then of his trip to Israel with a tweet saying he would instead visit after he is elected president.