"In what way does this event concern Israel? The state didn't exist at the time [of the Holocaust]," one anti-Israel organization said. 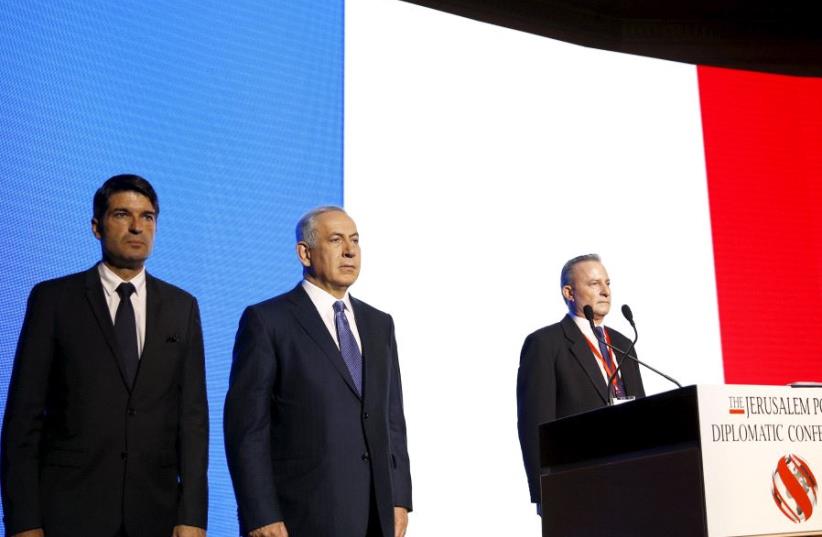 Israeli Prime Minister Benjamin Netanyahu (C) and former French Ambassador to Israel Patrick Maisonnave (L) observe a moment of silence to pay tribute to victims of the November 2015 Paris attacks, during the Jerusalem Post Diplomatic Conference in Jerusalem.
(photo credit: REUTERS/Ronen Zvulun)
Advertisement
Israeli Prime Minister Benjamin Netanyahu's decision to attend a ceremony to mark the 75th anniversary of the Vel' d'Hiv mass roundup of Parisian Jewry on Sunday is set to draw angry anti-Israel demonstrations in the French capital.According to French website LeMuslimPost, a number of organizations have called on their supporters to protest Netanyahu's arrival and to oppose French President Emmanuel Macron's decision to invite the Israeli prime minister to the memorial event.The president of the French Palestinian Solidarity Association (AFPS), Bertrand Heilbronn, dismissed the rationale behind Netanyahu's attendance at the ceremony in a joint letter with French-Jewish historian Dominique Vidal. "In what way does this event concern Israel? The state didn't exist at the time [of the Holocaust]. Israel cannot present itself as the sole inheritor of the victims of the Holocaust," the letter read. "The head of the Israeli government, who is from the Right, the far-Right of Israel, has no place at the commemoration of the roundup at Vel' D'Hiv," concluded the letter. 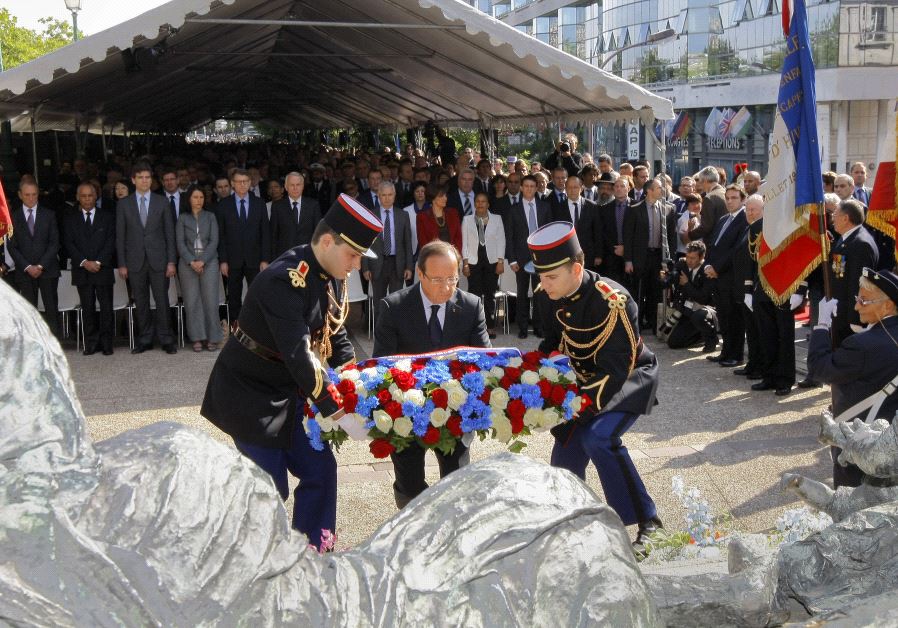 Former French President Francois Hollande (C) lays a wreath of flowers at the Jewish memorial during a ceremony to commemorate the 70th anniversary of the Vel D'Hiv roundup (Rafle du Velodrome d'Hiver) in Paris July 22, 2012. (REUTERS/Jacques Brinon/Pool)In a statement, the Communist Party of France said that the commemoration "must send a strong message of peace, and Benjamin Netanyahu is not the man for this message.""It has not been forgotten that in October 2015 the Israeli leader provoked unanimous anger by affirming, in contempt for historical reality and the facts, that Hitler had not desired to exterminate the Jews.""Equally, successive [Israeli] governments have left a large number of Holocaust survivors in poverty. In this context, this invitation will be an insult to the memory of the victims of the deportation," said the party's statement.The July 1942 Vel' d'Hiv roundup, known as the Rafle du'Vel d'Hiv or Rafle du Velodrome d'Hiver in French, is named after the stadium in which Nazi-led forces held the majority of those arrested ahead of their deportation to Auschwitz. According to French police records, over 13,000 Paris Jews were arrested and and deported to their deaths. In 1995, former French president Jacques Chirac formally apologized for the "irreparable act" carried out by the collaboration of "French police agents and gendarmes, acting under the authority of their leaders," in the roundup.Netanyahu is due to fly to Paris on Friday ahead of Sunday's commemoration and is due to hold a meeting with Macron later that day. He will then fly to Budapest to attend a summit of the Visegrad group, made up of Hungary, Poland, the Czech Republic and Slovakia.