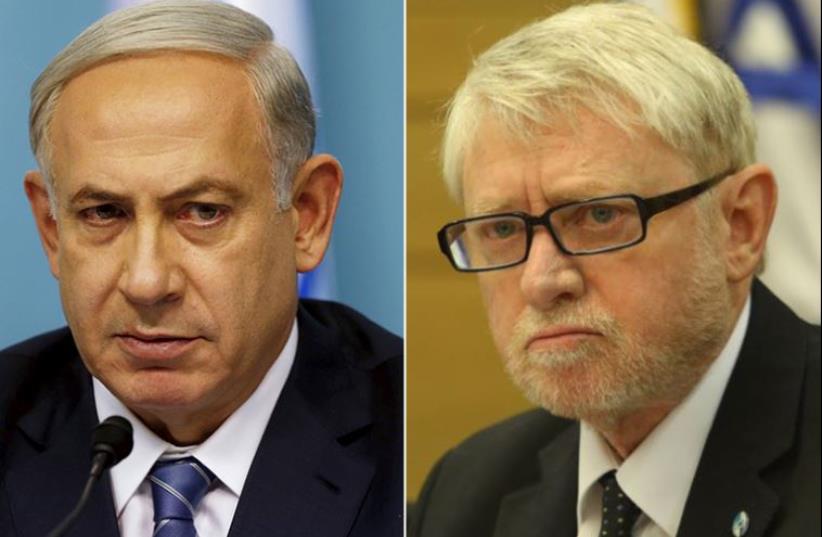 Netanyahu and Shapira
(photo credit: REUTERS,MARC ISRAEL SELLEM)
Advertisement
State Comptroller Joseph Shapira has referred a case to the Attorney-General in which Prime Minister Benjamin Netanyahu received $300,000 from his cousin and tycoon Natan Milikowsky, to pay for his legal defense against public corruption allegations, allegedly without the proper approval.Netanyahu received the funds before a special state committee ruled that he is prohibited from receiving such funds. This was after he was given a preliminary sign-off by the Knesset, although the state committee remains the final authority on the issue.Knesset State Control Committee Chairwoman Shelly Yacimovich referred the issue to Shapira last week after it was disclosed in a Haaretz report.Shapira’s office issued a statement on Monday night that he referred the issue to Avichai Mandelblit because he was not sure if the attorney-general had been aware of the money when he first reviewed a variety of legal questions relating to the prime minister’s desire to use donations from rich individuals to pay for his legal defense.The statement did not clarify whether Shapira believed that the prime minister had broken the law, although it is implied by a referral.Even if Netanyahu should not have accepted the funds, it is not a clear that he committed more than a general ethical violation.Netanyahu’s lawyers are also seeking to appeal to the state committee’s rejection of his request to receive millions in funds from Milikowsky and businessman Spencer Partridge.On December 17, the comptroller office’s lawyer informed the Knesset that Netanyahu’s only path of appeal would be to the High Court of Justice.A statement by the comptroller on Monday night noted that Netanyahu’s appeal for the state committee to reconsider this included new facts, but did not delve into the question over whether the state committee would entertain an appeal.