Rivlin: “Everyone knows that Africa is part of the future of the world.” 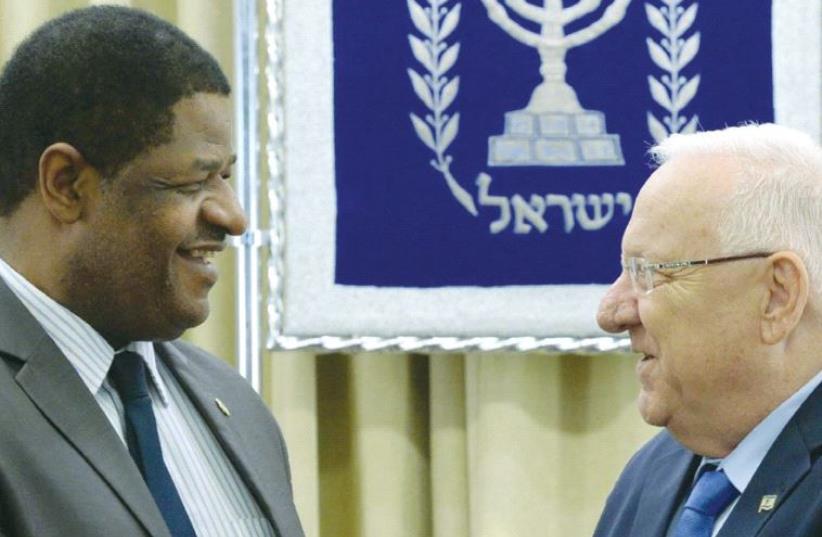 PRESIDENT REUVEN RIVLIN meets President of the Economic Community of West African States Marcel Alain de Souza on Monday.
(photo credit: Mark Neiman/GPO)
Advertisement
Israel can expect an ongoing series of visits by African dignitaries following the successful African tour by Prime Minister Benjamin Netanyahu in early July.Marcel Alain de Souza, who in April this year took up his role as president of the Commission of the Economic Community of West African States, (ECOWAS) told President Reuven Rivlin on Monday that he will be returning in just over two weeks when he accompanies Togo President Faure Gnassingbe who is due to visit Israel on August 10.ECOWAS is an economic conglomerate of 15 West African countries with a total population in the vicinity of 300 million who collectively represent enormous potential.De Souza, who was born in Benin, holds a Master’s degree in Economics from the University of Dakar as well as a specialized Master’s Degree in Management and banking at the West African Training Center for Banking Studies. He also completed training at the Institute of the International Monetary Fund in Washington. He has held several economics and managerial positions, the most recent being that of Minister for Development, Economic Development and Forecast, a role he held for four years until June, 2015.He was accompanied to the President’s Residence by former controversial and colorful MK Shmuel Flatto-Sharon and his wife, Clara, who have extensive business interests in West Africa, including gold, silver, diamond mining, oil and electric energy.“We look on him as a member of the family,” De Souza told Rivlin.Flatto-Sharon, 86, said that he had been active in Africa since he was 22 years old.”De Souza, who has been to Israel on three previous occasions, said that ECOWAS needed innovation in the battle against poverty, and was looking to Israel for cooperation in this struggle.He was grateful for help already received from Israel, but emphasized that militarily, more help was needed in fighting terrorism, and on the civilian side, it was essential to have much better training in agriculture for African farmers and in medicine for African oncologists.The ratio of African women who suffer breast cancer and cancer of the womb is very high, he said.Other areas in which Africa is seeking Israel’s cooperation include energy and drinking water.“We don’t see Israel as a small country. We see Israel as a giant,” De Souza said.Rivlin said: “Everyone knows that Africa is part of the future of the world,” adding that ECOWAS represents not only economic interaction between African states, but also represents Africa’s cooperation with the world.It is in Israel’s interests to cooperate with Africa, especially when it comes to fighting Islamic fundamentalism said Rivlin. ISIS is a dangerous phenomenon, he continued, noting that when it fails in Iraq and Syria, it takes out its ire on the rest of the world, striking indiscriminately in Florida, Germany, Belgium, Nice, Tel Aviv, Jerusalem and California. Therefore, all countries engaged in the struggle against terrorism must pool their intelligence and operational know-how in fighting terrorism and guaranteeing preservation of the values of the free world.He added that Israel had been happy to help Africa in combating its health, agriculture and water problems, especially during the Ebola epidemic.De Souza made it clear that he hadn’t come to ask for hand-outs but for cooperation so that it would be a win-win situation for Africa and Israel.There is much for Israel’s business community to gain by investing and entering into joint ventures in Africa, he said.