By JERUSALEM POST STAFF
SEPTEMBER 17, 2017 20:19
Prime Minister Benjamin Netanyahu during various speeches at the United Nations.
(photo credit: REUTERS)
Advertisement
Prime Minister Benjamin Netanyahu is to speak on Tuesday before the UN General Assembly. His advisers are already telling reporters that the prime minister’s speech will focus on Iran, the threat it continues to pose to Israel and the need for the world to annul the nuclear deal.The big question though is what Netanyahu’s gimmick will be this year. Ahead of the speech, The Jerusalem Post compiled a list of the top four gimmicks he has used since his election as prime minister in 2009.1) UN General Assembly 2009 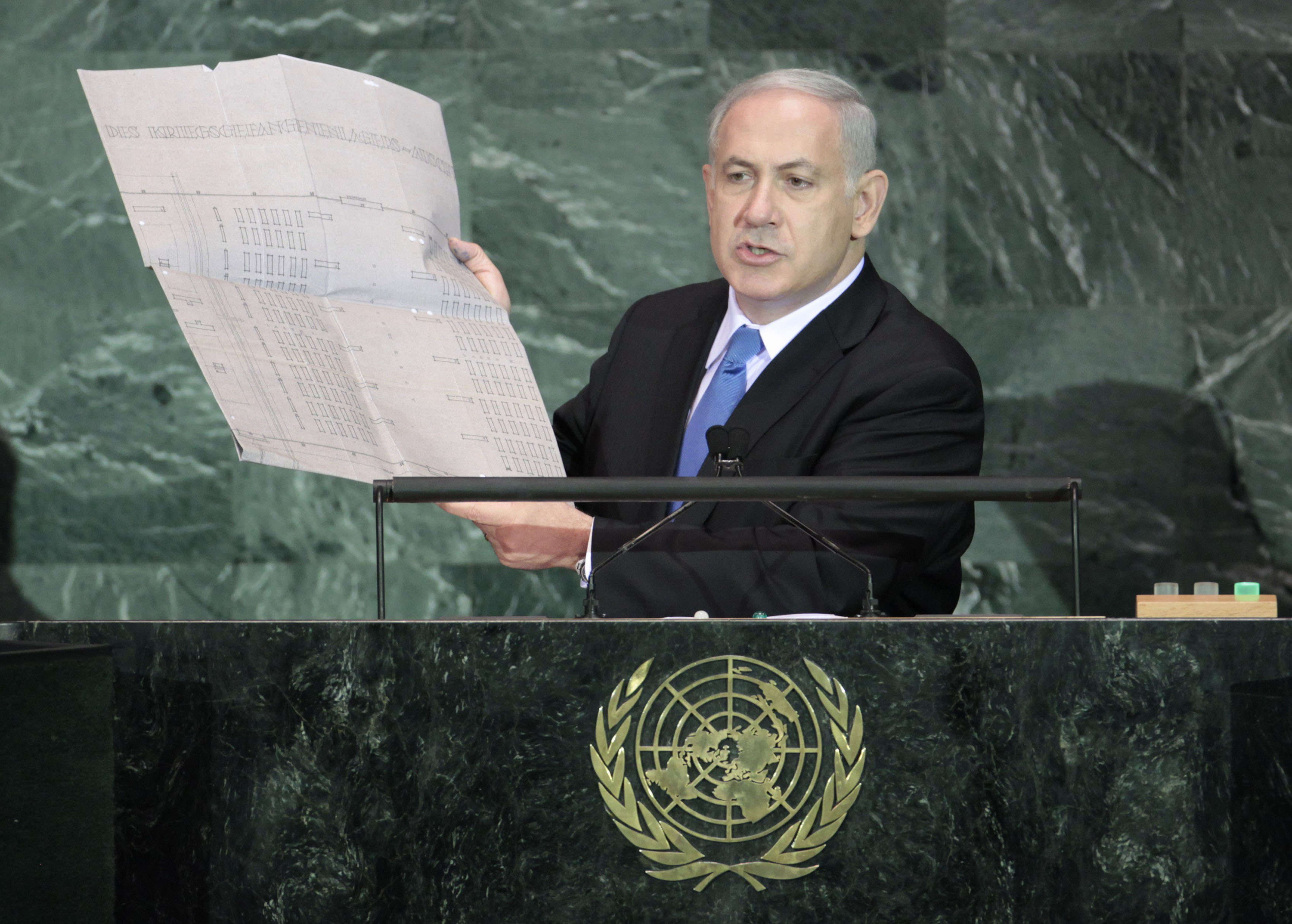 Israeli Prime Minister Benjamin Netanyahu holds up a document outlining plans for the Auschwitz death camp as he addresses the 64th United Nations General Assembly at UN headquarters in New York, September 24, 2009. (Reuters)In 2009, Netanyahu presented the United Nations General Assembly with a copy of the blueprints of the Auschwitz death camp. He spoke a day after Iranian president Mahmoud Ahmadinejad.“To those who gave this Holocaust-denier a hearing, I say on behalf of my people, the Jewish people, and decent people everywhere: Have you no shame? Have you no decency.... What a disgrace! What a mockery of the charter of the United Nations! Perhaps some of you think that this man and his odious regime threaten only the Jews. You’re wrong.”2) UN General Assembly 2012 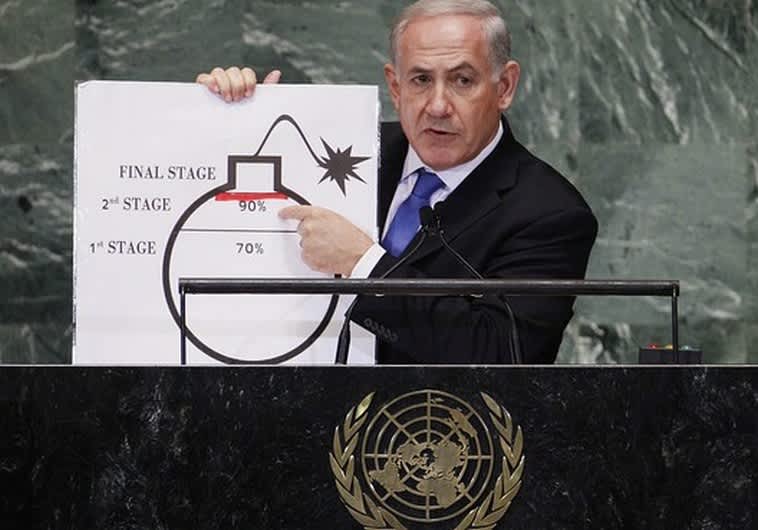 Prime Minister Binyamin Netanyahu points to a diagram of a bomb at the UN (Reuters)In 2012, Netanyahu presented the world with a Loony Tunes-like bomb cartoon which he proceeded to draw a red line on to show what stage Iran was at in its pursuit of enriched uranium.Holding a drawing of the bomb, with a lit fuse, Netanyahu told the UN: “At this late hour, there is only one way to peacefully prevent Iran from getting atomic bombs and that’s by placing a clear red line on Iran’s nuclear weapons program. Red lines don’t lead to war; red lines prevent war. Iran uses diplomatic negotiations to buy time to advance its program.”3) UN General Assembly 2014 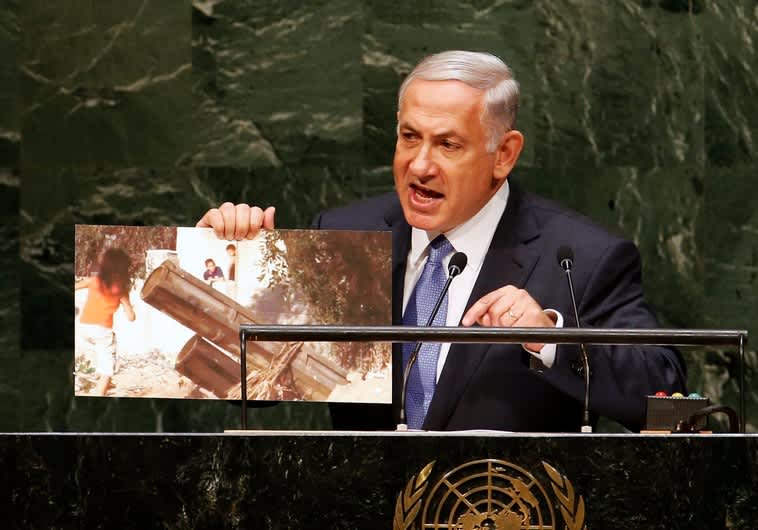 Israel's Prime Minister Benjamin Netanyahu holds up a photograph as he addresses the 69th United Nations General Assembly (Reuters)In 2014, Netanyahu displayed a picture from the Gaza Strip showing a rocket launcher next to a group of Palestinian children. Netanyahu’s speech was just a few weeks after the Gaza War had ended and Israel was facing fierce international criticism.“You see three children playing next to them. Hamas deliberately put its rockets in hundreds of residential areas like this. Hundreds of them. Ladies and gentlemen, this is a war crime… And these are the real war crimes you should have investigated, or spoken out against from this podium last week.”4) UN General Assembly 2015 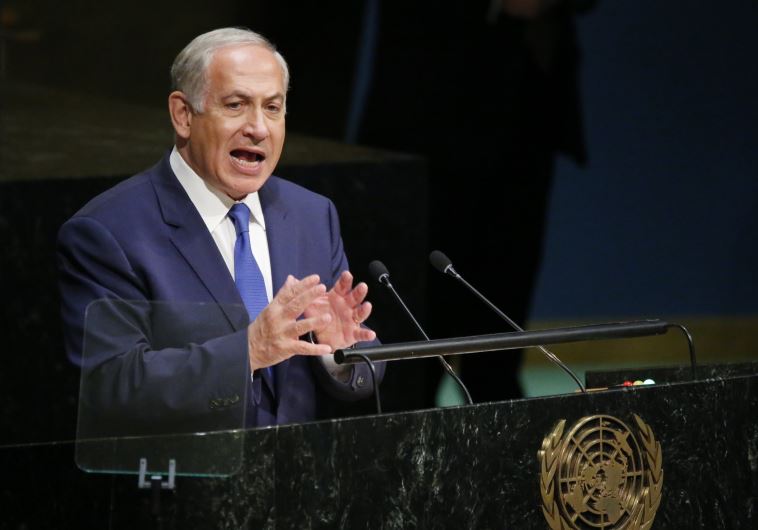 PM Benjamin Netanyahu addresses attendees during the 70th session of the United Nations General Assembly, October 1, 2015 (Reuters)In 2015, Netanyahu stopped his speech midway and stood silent for 44 seconds. That silence, he said, was designed to show how the world has responded with deafening silence while Iran continues to threaten to murder Israeli citizens.“Seventy years after the murder of six million Jews, Iran’s rulers promise to destroy my country. Murder my people. And the response from this body, the response from nearly every one of the governments represented here has been absolutely nothing! Utter silence! Deafening silence.”5) UN General Assembly 2017?So, what will happen on Tuesday? We will have to wait and see.