Defense Minister Avigdor Liberman blamed Assad for the chemical attacks in an interview prior to Putin's rebuke. 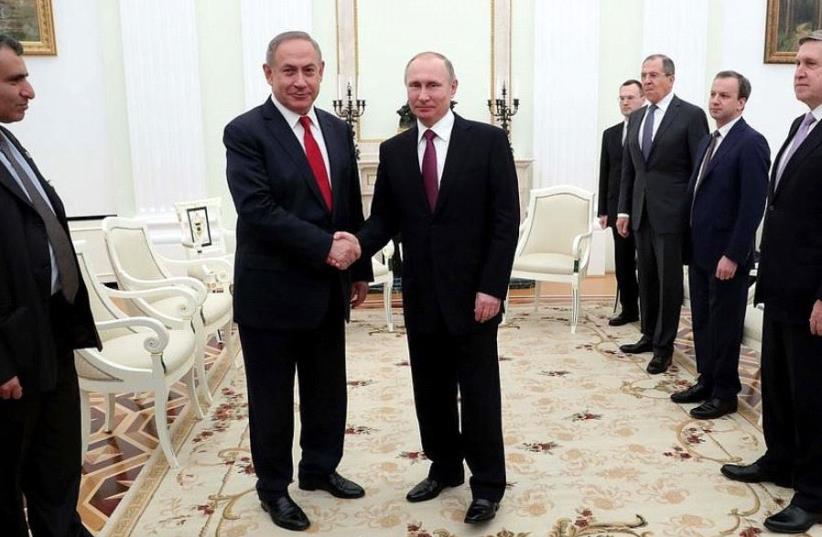 Prime Minister Benjamin Netanyahu (L) meets with Russian President Vladimir Putin in Moscow, March 9, 2017
(photo credit: KREMLIN PRESS SERVICE)
Advertisement
Hours after Defense Minister Avigdor Liberman blamed Syria “100%” for the chemical attacks in Idlib, Russian President Vladimir Putin stressed to Prime Minister Benjamin Netanyahu in a phone call on Thursday the “unacceptability of making groundless accusations.”Netanyahu called the Russian president to offer his condolences following the St. Petersburg attack earlier in the week, and in its summary of the conversation, the Kremlin said that “an exchange of views took place in connection with the incident on April 4 in the Syrian province of Idlib... involving chemical weapons.”According to the statement, Putin “stressed the unacceptability of making groundless accusations against anyone before a thorough and impartial international investigation."The summary of the conversation issued from Jerusalem, however, did not give any sense of Putin’s irritation. “Prime Minister Netanyahu told Putin that the international community needs to complete efforts to cleanse Syria of chemical weapons, as was agreed in 2013,” the statement read.
Netanyahu meets Putin in Moscow (credit: REUTERS)
Soon after Tuesday’s attack, Netanyahu said, “Israel strongly condemns the use of chemical weapons in any situation, especially against innocent civilians,” adding that the pictures from Idlib need to shake every human being. He did not, however, directly blame Syrian President Bashar Assad.Putin was apparently responding to an interview Liberman gave to Yediot Aharonot, in which he said there was no doubt that Assad was behind the attack. The Kremlin is, along with Iran, Assad’s main backer.In his interview, Liberman said categorically that the attacks in Idlib “were carried out at the direct order of the president of Syria, Bashar Assad, with Syrian planes.“The cruelest thing is that the injured, who were evacuated from the area to a hospital, were attacked a second time by chemical weapons when the Syrian planes attacked the hospital,” he continued.Liberman also took aim at the world’s reaction.“The response of the world community is nothing, it just does not exist,” he said. “That brings me back to the conclusion that Israel can only depend on itself. Assad tried in the past to get nuclear weapons through North Korea and others in the region, like Hezbollah, and [Hezbollah head Hassan] Nasrallah is no different than him.“There are people here who are cannibals,” he said. “When I am asked why there is no peace in the Middle East, it is like asking a cannibal to be vegetarian. The word ‘peace’ is not relevant in the Middle East. We can get to diplomatic arrangements, but not to peace.”Asked whether Israel needs to take action in Syria, Liberman replied that Israel does not need to “take the coals out of the fire” for anyone.“This is the responsibility of the international community,” he said. “I am not willing for us to become the schmucks that everyone pisses on. The world should take responsibility, and instead of talking, do something.”