Sources: Netanyahu has not received invite to Trump inauguration 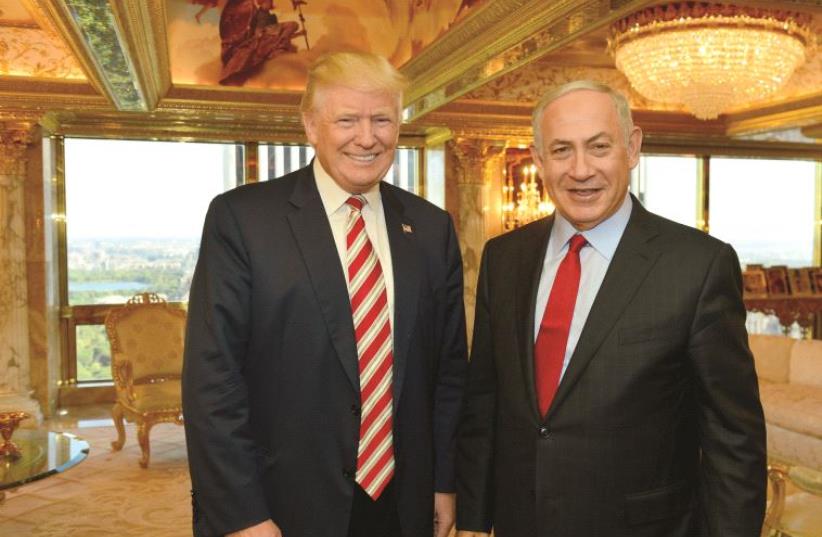 Rencontre entre Benjamin Netanyahou et le candidat à la présidence Donald Trump en septembre
(photo credit: REUTERS)
Advertisement
Prime Minister Benjamin Netanyahu has not received an invitation to attend US President-elect Donald Trump’s inauguration on January 20, sources in Netanyahu’s office said on Sunday in response to a media report that Trump wants Netanyahu there.The New York Post on Saturday reported that Trump’s advisers, led by his sonin- law Jared Kushner, want to invite the prime minister to the inauguration or even arrange a meeting between the two leaders before then.“There’s a plan for Trump to meet with Netanyahu,” the paper quoted a source close to the Trump transition team as saying. “They’re talking all the time.And Netanyahu is talking about possibly going to the inauguration.”Sources in the Prime Minister’s Office were quoted as saying that the two men have spoken a few times since the election in November.Netanyahu phoned Trump to congratulate him on his victory the day after the November 8 presidential vote, and Trump – according to a PMO readout of that conversation at the time – invited the premier to meet in the US at his “first opportunity.”On Sunday, Netanyahu posted a brief video clip on his Twitter account of comments Trump made on Saturday evening regarding Israel.“We have to protect Israel,” Trump said in the clip. “Israel to me is very, very important. We have to protect Israel. And I disagree with what he [President Barack Obama] has done with Israel. I listened to Secretary [John] Kerry’s speech [Wednesday night], and I think it is very unfair to Israel what happened.”Above that clip, Netanyahu tweeted the following message in both Hebrew and English: “Thanks for your support, President- elect Trump!” Netanyahu and Trump last met in September when Netanyahu was in New York attending the annual UN General Assembly meeting. During that trip he also met Democratic presidential candidate Hillary Clinton.