Earlier Monday, when the cabinet received Trump at Ben-Gurion Airport, Bennett asked Trump face-to-face to be the first president to recognize Jerusalem, and Trump responded, “there’s an idea.” 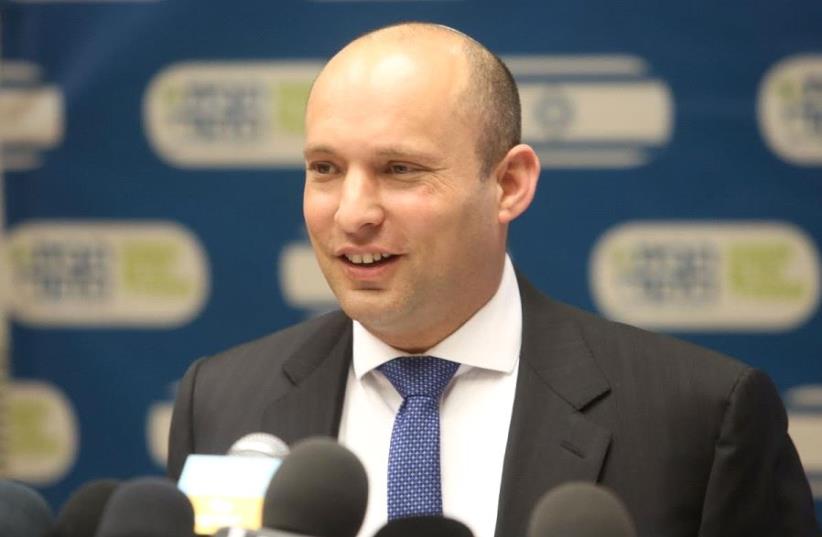 Bayit Yehudi leader Naftali Bennett
(photo credit: MARC ISRAEL SELLEM/THE JERUSALEM POST)
Advertisement
Education Minister Naftali Bennett called on US President Donald Trump to recognize Jerusalem as Israel’s capital at a Jerusalem Day event Monday night.“Today you visited the Western Wall and touched the hearts of the Israeli people. I'm sure your heart was touched as well,” Bennett said, directing his remarks to Trump. “‏The Western Wall, Temple Mount and the City of David are parts of Jerusalem not recognized by America or the rest of the world. This is a historic anomaly.‏”Jerusalem has been our capital for 3000 years. More than Paris for France, London for England or Washington DC for the United States… As the leader of the free world, and of Israel's best friend, you have the historic opportunity to be the first leader to recognize Jerusalem as Israel's eternal capital,” he added.Russia already recognized west Jerusalem as Israel’s capital earlier this year.Bennett ended his remarks by saying that Trump can “make history” if he does so.Earlier Monday, when the cabinet received Trump at Ben-Gurion Airport, Bennett asked Trump face-to-face to be the first president to recognize Jerusalem, and Trump responded, “there’s an idea.”Foreign Affairs and Defense Committee chairman Avi Dichter (Likud) said “there is something exciting about the statements and the places to which President Trump arrived on his visit to Israel. For the first time, a US President went to the Western Wall. His statements of support for Israel have great significance a moment after his hand touched the Kotel.”Dichter pointed out that Trump visited Jewish and Christian holy sites in Israel, and said that, had Trump asked, he could have visited the Al-Aksa Mosque on the Temple Mount, but in Saudi Arabia, he was not allowed to visit Muslim holy sites, because only Muslims are allowed in Mecca and Medina.“President Trump knows well that Israel is not only the most serious democracy in the Middle East, it’s the only democracy,” he added.The Left focused on the possibility of renewed peace talks with the Palestinians in light of Trump’s push.MK Hilik Bar (Zionist Union), chairman of the Caucus for a Two-State Solution, called for Trump to launch a regional peace process, including the Palestinians.“President Trump is signaling to Israel that he will act to bring peace in the future, he loves Israel, but if we want peace, it won’t fall out of the sky. The moderate Sunni Arab world has to be enlisted,” Bar posited. “The Arab world will not accept a regional agreement or normalization with Israel without solving the conflict between us and the Palestinians, period.”Meretz chairwoman Zehava Gal-On said that the government must evacuate settlements to start a regional peace process.“However, [Prime Minister Benjamin] Netanyahu plans to promote peace like he did at the Bar-Ilan Speech,” calling for a demilitarized Palestinian state in 2009, “so we can expect another eight years of nothing,” Gal-On added.Knesset Interior Affairs Committee chairman David Amsalem (Likud) was similarly skeptical: “The importance of Trump’s visit is in the fact that it happened. I’m glad there is personal chemistry between the two leaders and convinced the president loves Israel, and that will surely help us in the future.“But, in a meeting of one hour, one can’t reach understandings in a hundred-year conflict,” Amsalem argued. “Everyone knows that the biggest obstacle to attaining peace is the unbridled incitement by the Palestinian Authority towards Jews, and I have no doubt President Trump understands that.”MK Abdullah Abu Marouf (Joint List) called on Trump not to meddle, saying that “whoever makes arms deals for billions of dollars and wants to build a separation wall cannot be a man of peace.“The peace process between Israel and the Palestinians must be restarted without the American government’s intervention, which was always an obstacle,” he stated. “Real and just peace including the end of the occupation and the establishment of a Palestinian state next to Israel will come from the initiative of both nations, not from someone who wants to promote his own country at the expense of the Israeli-Palestinian conflict.”Abu Marouf was one of the lawmakers from Hadash, the communist party within the Joint List, who led a rally against Trump in front of the US Embassy in Tel Aviv Monday.