Researchers at Ben-Gurion University have found that, despite the positive- seeming statistics, the incentives have actually hurt the environment. 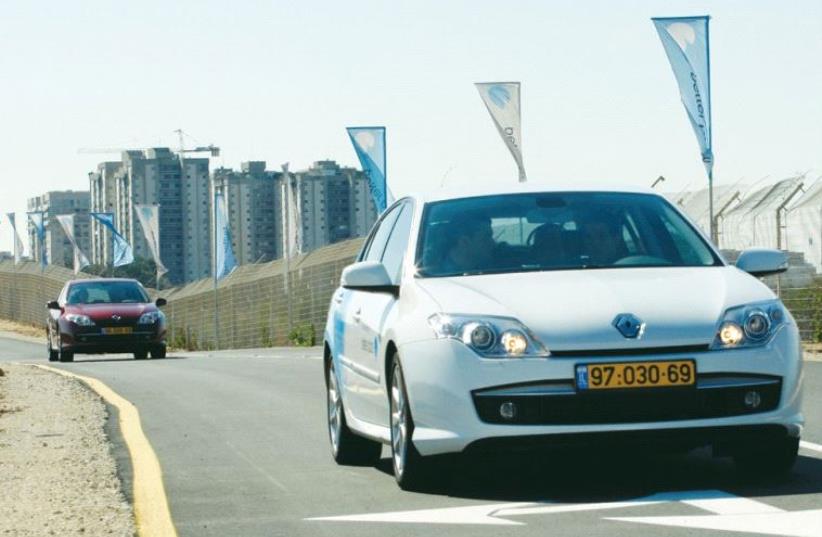 ELECTRIC CARS of the doomed Better Place vehicle network make their debut at the company’s demonstration center in Tel Aviv
(photo credit: REUTERS)
Advertisement
At first glance, it would seem that Israel’s program to encourage people to buy energy efficient cars has worked.In the year after Israel introduced the ambitious program in 2009, lowering taxes based on a car’s energy efficiency, the market share of these jumped by 71 percent. The plan even received praise from the Organization for Economic Cooperation and Development, calling it a success and an example to countries worldwide.However, researchers at Ben-Gurion University have found that, despite the positive- seeming statistics, the incentives have actually hurt the environment.The study, published in the June edition of the scholarly journal Energy Policy, showed that, despite the jump in the percentage of people purchasing energy efficient vehicles, the vehicles encouraged people to drive more frequently at longer distances and thus reduce the hoped for eco-friendly outcome.For the study, BGU researchers,  Dr. Stav Rosenzweig, Dr. Ofir D. Rubin and PhD student Aviv Steren, who are members of the  Guilford Glazer Faculty of Business and Management, looked at data from the year before the 2009 legislation went into effect and then looked at the year after. The results showed that although the percentage of efficient cars on the road increased, the tax cuts had a few unintended affects that eventually led to a 40 percent decrease in the anticipated energy savings.Rosenzweig said that, as efficient-vehicle prices dropped, this forced down prices for the other vehicles on the market in an attempt to stay competitive.“Policy makers with really good intentions are not always aware of the way that people will respond to their policies,” she said.She noted that the cost of pollution is staggering.“OECD countries, plus China and India, spend almost $3 trillion a year addressing death and health issues from transportation,” Rosenzweig said.She said that among the best solutions would be to increase public awareness of the pollution that comes from being on the road and find ways to stimulate people to drive less. She noted that the most effective way to achieve the latter would be to increase gas prices, though this is the least popular option.Another way to get a real environment benefit would be to encourage more public transportation and provide more lanes for buses and taxis.