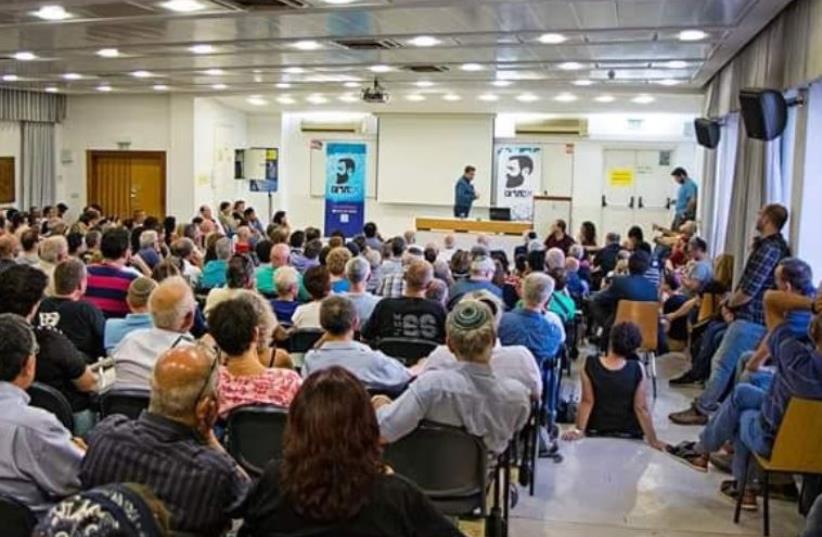 STUDENTS AT Ben-Gurion University of the Negev participate in a recent extra-curricular program in Zionist thought run by the Im Tirtzu NGO
(photo credit: Courtesy)
Advertisement
This week, thousands of students marked the end of the largest Zionist academic extra-curricular program on Israeli campuses, run by right-wing NGO Im Tirtzu.The Program for Zionist Thought, the organization’s flagship academic project, aims to impart pro-Israel, Zionist and Jewish knowledge to Israeli students as a supplement to their formal university education.“The Program for Zionist Thought is an important effort at engaging in the battle of ideas, and we believe it represents an important way of helping Israel’s future elite to better appreciate the Zionist perspective,” said Im Tirtzu CEO Matan Peleg.According to the organization, the project was established out of a need expressed by students who have complained about both the exclusion of Zionist thought and a strong anti-Israel bias in their academic curriculum.The program began in 2012 at the Hebrew University of Jerusalem and has since expanded to include Tel Aviv University, Ben-Gurion University of the Negev, Bar-Ilan University and Haifa University. It has attracted thousands of students to hear lectures from prominent Israeli figures and experts in their fields.The program features eight lectures spanning the course of the academic semester, with some universities holding two programs annually.Among the program lecturers are Jerusalem Post columnist Caroline Glick, Nobel Prize Laureate Yisrael Aumann, Ambassador Yoram Ettinger, Ben Dror-Yemini, Rabbi David Stav, Father Gabriel Naddaf and Maj. Gen (ret.) Yaakov Amidror.Peleg noted that the program is not meant to impose or recruit students towards a right-wing ideology but rather offer an alternative perspective for students and contribute to the public dialogue on campuses.“The success of the program indicates the overwhelming need and demand for Zionist education on campuses,” Peleg said. “Every year more and more students are putting everything aside for a couple hours a week to come out after school hours and attend the lectures.”He added, “This is the natural reaction and response to the post-Zionist and anti-Zionist phenomenon that has swept over Israeli academia.”Dror Kapah, a recent graduate of the Open University in Education and Political Science, said he doesn’t mind commuting from Hadera to Tel Aviv University’s campus to attend the program.“In order to broaden your horizons you need to hear a wide variety of viewpoints,” Kapah told The Jerusalem Post.According to Kapah, during his undergraduate studies he said he was exposed to “one sided thought,” receiving mainly “left-leaning articles” as mandatory reading.“Academics is a monopoly, when are you a student you are fed a leftist philosophy and you have no say because this is the required reading,” he said. “I want to hear both sides and make a decision and develop an opinion for myself.”“If only there were more programs like this for students, and not only for students who are right wing, but just students who want to learn more diverse opinions,” he added.Julia Kosenchuk, a first-year student at Ben-Gurion University of the Negev in Middle Eastern Studies is one such student.She recounted a story similar to Kapah’s, saying that the program has given her a broader perspective on Israeli politics and current events.“The program provided me with lectures that presented both sides – not every lecture did this - but many provided both view points and it’s funny because at my university I don’t think they provide this,” she said.Kosenchuk said that she arrived on campus intent on “staying away” from student organizations, both right and left leaning, but shortly after an unusual experience during her first semester she “changed her mind.”“I had one class in politics where the lecturer sent all the students an email saying that he was going to talk about our exam and that we should all attend, and instead he brought in ‘Breaking the Silence’ to speak. It was a surprise, and I don’t think this is the way,” she said.“I wanted to be exposed to other things and I understood that this wasn’t happening, and that it was very one sided,” she added.After this experience, she decided to join the Im Tirtzu program because she said she felt the organization had always answered her questions honestly and straightforwardly, and today is an active member on Ben-Gurion’s campus.“I think that when I first started inquiring about Im Tirtzu I heard a lot of talk saying that they were extreme, and so I asked the tough questions and I inquired, but with all my exposure to the organization I haven’t see anything extreme, to the contrary,” she said.