Remains of Adar Goldin and Oron Shaul held by Hamas in the Gaza Strip, three years after Operation Protective Edge. 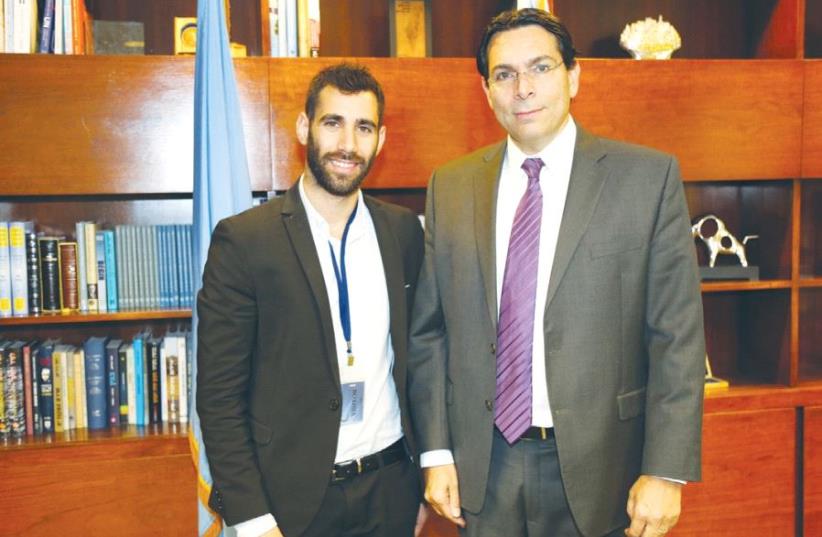 AVIRAM SHAUL (left) meets with Ambassador to the UN Danny Danon in New York this week
(photo credit: ISRAEL MISSION TO THE UN)
Advertisement
NEW YORK – The brother of St.-Sgt. Oron Shaul, who was in action during Operation Protective Edge against Hamas in 2014, is visiting the United States this week to advocate for the return of Oron’s body, still held in Gaza, back to Israel for burial.Over the past five days, Aviram Shaul has been meeting with officials in both Washington and New York, urging them to work for the cause.In DC, Shaul met with US senators as well as officials of the State Department, and in New York, he is scheduled to speak with UN officials and representatives of Security Council member states.“The issue here is humanitarian,” he told The Jerusalem Post. “We are putting politics aside and we deal with this as a humanitarian request.“We are facing a very inhumane organization. When Hamas decides to cooperate, this will end. But they don’t want to. There are no negotiations,” he added. “I want [US officials] to understand that when there is going to be negotiations, we will need their support. The US is a strong and powerful enough country to give Israel weight when we need it.”Another part of Shaul’s visit is dedicated to raising awareness about the campaign within the American and international Jewish community.To this end, he has spoken about his brother to Jewish leaders, organizations and youth in the United States.“After every conversation, I receive such encouragement,” he told the Post. “It’s indescribable. It give me air and strength to continue to fight.”Shaul met with humanitarian organizations and officials from various countries in Geneva a few months ago. But for him, this is not just about his brother. In every meeting, he mentions Lt. Hadar Goldin, whose body is also held by Hamas in the Gaza Strip, three years after Operation Protective Edge.“At the end of the day I want the officials I meet with here to understand that there this is a humanitarian demand,” Shaul told the Post. “At the end of every war all over the world, there is an exchange of bodies and prisoners, but they need to understand Hamas is not abiding by international law.“For 99% of the people I meet, I see the red in their eyes, how much they understand and are moved,” he said. “They want to help and they say they will do their best, and I want to believe it.”Goldin’s parents, Leah and Simcha, have made several trips to the United States over the past year to campaign to bring their son’s and Oron Shaul’s bodies back home.They too have held multiple meetings at the United Nations as well with officials including former secretary- general Ban Ki-moon; his former assistant for Peacekeeping Operations Edmond Mulet; Israel’s ambassador to the UN Danny Danon; as well as his US counterpart, Nikki Haley.“Hadar and Oron were killed and captured by despicable terrorists, and the international community must act to return them to their families,” Danon said. “We are in continuous contact with our colleagues in the UN and with diplomats from around the world to ensure their return. The meetings attended by Aviram Shaul are a vital part of these efforts. We will not rest until these heroes are returned to their families for a proper burial in Israel.”For the Goldin and Shaul families, the past three years have not been easy. Oron and Aviram Shaul’s father, Herzl Shaul, died of cancer last year. He was a major force in the struggle for his son’s return.“It’s three years that we are waiting for Oron,” his brother said. “Three years that Operation Protective Edge is officially over, but while everyone thinks it ended in August 2014, for us, the war has just begun.”