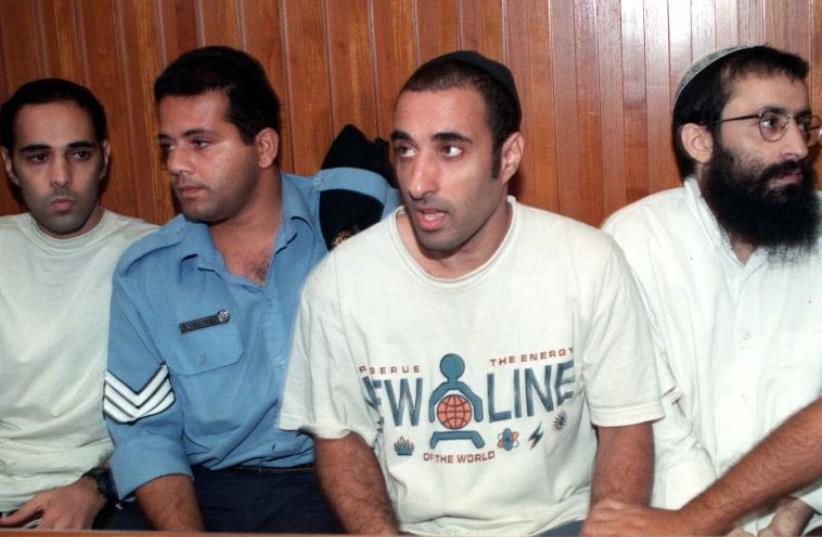 Hagai Amir, (3rd from L) at Supreme Court in 1995
(photo credit: REUTERS)
Advertisement
A Tel Aviv judge ordered Hagai Amir, the brother of Yitzhak Rabin’s assassin Yigal Amir, released to five days’ house arrest on Wednesday, the day after he was arrested for a Facebook post that allegedly incited against President Reuven Rivlin.Magistrate’s Court Judge Guy Saguy issued the ruling following an appeal by Amir and his attorneys of a ruling earlier in the day by Judge Yaron Gat to keep Amir in custody until Thursday morning.Saguy said that, although Amir’s Facebook post was “reprehensible,” he didn’t think that it constituted a reason to keep him in custody nor did he think that the investigation required Amir be kept in custody.Amir will spend his confinement at his cousin’s house in the West Bank settlement of Shavei Shomron. He was also required to pay NIS 30,000 bond and is banned from using the Internet during his house arrest.In the original hearing on Wednesday, Gat said that he decided to keep Amir in custody not only because of the evidence presented by police, but also because of “the tense public atmosphere recently, and the unbridled militancy that has recently been washing over social networks.”In recent weeks, Israeli and Palestinian analysts alike have spoken repeatedly about the influence of social networks – particularly Facebook – during the ongoing wave of violence in Israel and their ability to spread incitement and hate speech.The police representative in court, Yoni Hirschhorn, said that if the post had been written by “an anonymous person no one would have paid attention to it because he wouldn’t be someone with a past in this area,” and that it is crucial to the case that the alleged offender is the brother and co-conspirator of Rabin’s assassin.In the post, which was published on Tuesday, Amir wrote: “Rivlin is an ass-kissing politician.He’s not the one who will determine whether my brother is released or not, only God can decide, just as God decided that Rabin would die – even though Rivlin and his friends didn’t agree. He [God] ruled that Rivlin would be president, and the time has come for him [God] to rule that Rivlin together with the Zionist state must pass from the Earth, just as Sodom did, because of the crimes they committed legally against their own people. This day is not far off.”Amir wrote the post two days after Rivlin wrote on Facebook that he would never set Yigal Amir free.Hagai Amir’s attorney, Ari Shamai – who has also represented Yigal Amir – argued that Hagai was simply expressing “a belief that religious people have that it is God who determines what happens,” adding that Amir’s comments were “philosophic ideas.”Shamai also said that “since he [Amir] got out of prison he has become a peace-seeker.”Hagai Amir was released in May 2012 from Ayalon Prison, near Ramle, after serving 16-and-a-half years for conspiracy to commit murder and possession of a firearm, for his part in helping his brother murder Rabin. He was sentenced to an additional six months in 2006, after his conviction for threatening to have then-prime minister Ariel Sharon killed.Since his release, Amir has been very outspoken on Facebook.He’s expressed sentiments that showed sympathy with Palestinians or a moral equivalency between the IDF and Hamas and support for a binational state.Amir has never expressed remorse for his role in the assassination and has at times expressed support for conspiracy theories about the murder.Yigal Amir is serving a life sentence in solitary confinement for the murder of Rabin.