"Resolution 922 is a revolutionary plan for promoting real social equality." 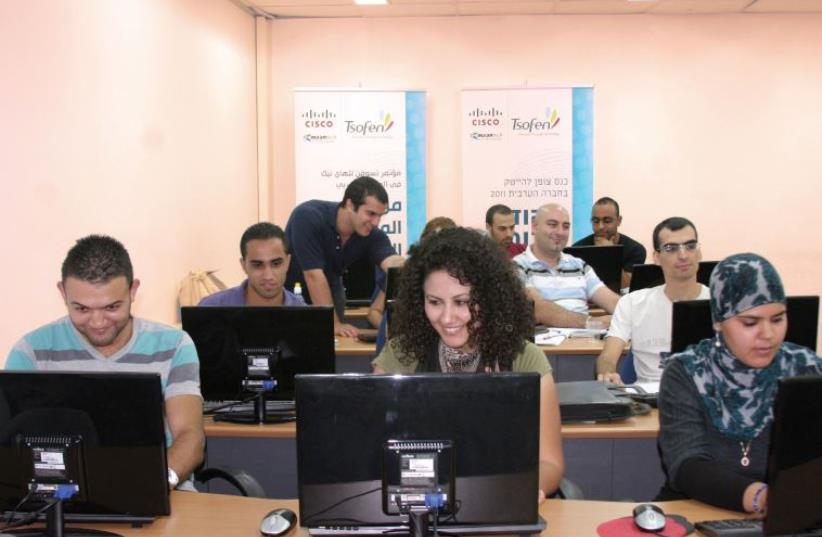 Integrating Arab citizens into the high-tech and start-up industries at a Tsofen High Technology Center
(photo credit: COURTESY TSOFEN HIGH TECHNOLOGY CENTERS)
Advertisement
(Tribune News Service) - The cabinet Monday convened the committee for Arab affairs headed by Prime Minister Benjamin Netanyahu and led by Minister for Social Equality Gila Gamliel. The committee announced a NIS 20 million allocation for a hi-tech program for minority communities. The committee also discussed Cabinet Resolution 922 from December 2015, which provided for investments in the Arab sector totaling NIS 15 billion. It was reported in today's discussion that NIS 4.5 billion of this amount had already been allocated to economic development in Arab communities.At the outset of the discussion, Netanyahu commented on law enforcement and crime in Arab society. "The law applies to everyone, and we are not willing to tolerate violations of the law. We are taking action against them, as I yesterday instructed the minister of public security to act against rioting and against shooting, as we saw. This fits in with the same concept of one country and one law, and we'll continue this way."A video circulated on social media on Sunday of gunfire during a Bedouin wedding in the south. The groom was arrested a day later. In Arab society, however, severe criticism is being expressed about the absence of enforcement in a large number of killings and murder. Last week, Forsan Khaled Joubrin, a 13 year-old boy, and Shafik Abu Aziz Joubrin, his 49 year-old uncle, were shot to death while taking part in an event in honor of a wedding in Umm al Fahm.During Monday's discussion, Gamliel, who was involved in preparing the NIS 15 billion plan, said, "Resolution 922 is a revolutionary plan for promoting real social equality. In just two years, we have seen a substantial rise in Arab society in many growth encouragement indicators: The rate of eligibility for matriculation, the proportion of those studying in higher education, the number of those employed and the employment rate. The fact that the program is so successful shows that the government's commitment cuts across ministries and political parties."In the framework of the NIS 20 million allocation for high tech, it was decided to construct rental buildings for hi-tech and hi-tech services in minority communities. The Ministry of Transport will pave access roads to the industrial zones in which the buildings will be constructed. The cabinet announcement stated, "The plan is projected to create conditions for adding thousands of new jobs in development, software, and services and will contribute to narrowing the gap between supply and demand of employment in Arab society."During Monday's meeting, an interim report was presented about implementation of the program in 2016-2017. According to the report, NIS 1.85 billion was invested in transportation and infrastructure, NIS 1.5 billion in reinforcing local authorities, NIS 800 million in education and NIS 400 million in employment in Arab society.The announcement said that as a result of the plan's implementation, the rate of eligibility for matriculation had risen 6.3% in the past two years, the number of students in Arab society was 2% higher and 88,000 children and teenagers had joined the many informal education frameworks. 30,000 new placements in the labor market had been made through 23 employment guidance centers operated as part of the program, and the number of trips on public transportation had risen 127%.Following the government's decision, Paz Hirschmann and Sami Saadi, co-CEO's of the NGO Tsofen and leaders of the initiative, commented:"We congratulate the government on this historic move. This act will bring 3,000 software development jobs to Arab and Jewish engineers and create thousands of other jobs in Arab cities, including in the center of the country. We see the number of Arab undergrads studying hi-tech relevant subjects increasing and the Arab community demonstrating stronger confidence in the hi-tech sector as a viable employment option."This is a positive and quiet 'hi-tech revolution' among the Arab community in Israel, which includes high-paying salaries for Arab women. This decision is an opportunity to realize the immense potential of the Arab population in the Israeli high-tech industry, which strives for creative minds. Indeed, the time has come to develop infrastructure for hi-tech in Arab communities. This will be a real game-changer - Arab cities will become legitimate hi-tech cities that draw workers from surrounding towns and communities, just like Tel Aviv or Haifa. "