The churches' statement is signed by senior Christian leaders of Jerusalem and calls on world leaders to intervene and help them protect the status quo.

Worshippers hold candles as they take part in the Christian Orthodox Holy Fire ceremony at the Church of the Holy Sepulchre in Jerusalem's Old city May 4, 2013.
(photo credit: REUTERS/AMMAR AWAD)
Advertisement
Heads of churches in Jerusalem on Monday criticized what they see as a breach of the status quo in the capital, claiming there is a “systematic attempt to undermine the integrity of the Holy City of Jerusalem and the Holy Land, and to weaken the Christian presence.”In a joint statement the leaders said, “We now find ourselves united once again in condemning recent further encroachment on the status quo,” the churches said. “In such matters as this, the Heads of the Churches are resolute and united in our opposition to any action by any authority or group that undermines those laws, agreements, and regulations that have ordered our life for centuries.”The church leaders are referring to two contentious issues that surfaced in recent months.The first is a Jerusalem District Court ruling from last month saying that the purchase of three major compounds adjacent to Jaffa Gate in the Old City were carried out legally, and as a result, were transferred from the Greek-Orthodox church to the rightwing NGO Ateret Kohanim Yeshiva, according to a Maariv report.The second issue is a bill proposed by the Kulanu MK Rachel Azaria which is signed by 39 other MKs across the political spectrum, that seeks to nationalize lands owned by churches in west Jerusalem and sold to private entrepreneurs.The bill aims to prevent exploitation of residents who live on these properties. 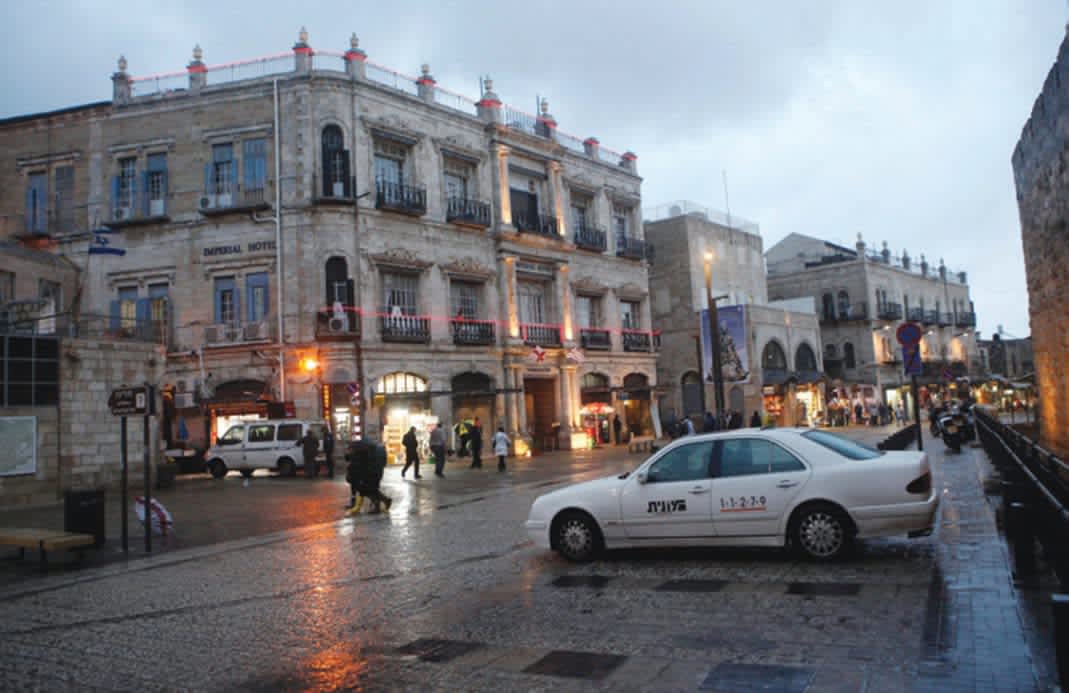 THE IMPERIAL HOTEL (left), inside Jaffa Gate in the Old City of Jerusalem, is located on land that was leased to the hotel but belongs to Christian churches. (Flash90)
Churches leased the disputed properties in west Jerusalem to the Jewish National Fund, mainly in the 1950s, parts of which it sold to residents living there. In the next 20-50 years the lease periods will end, and the churches have reportedly sold parcels of the land to private entrepreneurs – a deal that affects the residents, and creates future uncertainty.It was reported that even now – before the lease periods have ended – the residents are facing uncertainty over mortgage and making upgrades to properties, such as installing an elevator in buildings.The bill proposes to compensate all sides that would be harmed from the nationalizing of land.The churches statement is signed by senior Christian leaders of Jerusalem, including Greek Patriarch Theophilos III; Armenian Patriarch of Jerusalem Nourhan Manougian; Apostolic Administrator of the Latin Patriarchate, Archbishop Pierbattista Pizzaballa; and Archbishop Aba Embakob of the Ethiopian Orthodox Patriarchate.The heads of churches added that they call on world leaders to intervene and help them protect the status quo.“We therefore, as those to whom Divine Providence has entrusted the care of both the holy sites and the pastoral oversight of the living, indigenous Christian communities of the Holy Land, call upon our fellow Church leaders and faithful around the world, as well as the heads of governments, and all people of good will, to support us in order to ensure that no further attempts are made from any quarter to change the historical status quo and its provisions and spirit,” the statement reads.“We cannot stress strongly enough the very serious situation that this recent systematic assault on the status quo has had on the integrity of Jerusalem and on the well-being of the Christian communities of the Holy Land, as well as on the stability of our society,” it adds.Azaria, who is also a former Jerusalem city councilwoman, told The Jerusalem Post in response to the letter that the she intends to protect the residents living on the disputed lands, and has no intentions to weaken the Christian presence in the capital.“The land ownership bill I initiated has one goal only: to protect the residents. There is a group of wealthy entrepreneurs that bought the land from the church and thousands of residents in Jerusalem can find themselves homeless, after they purchased their homes fair and square,” she said.“This law is not a breach of the status quo mainly because it does not apply to church-owned lands, but only to the lands bought by real estate entrepreneurs,” she added.