Organizers believe that in all likelihood the protestors will not be allowed into the site with the Torah scrolls, which could lead to a blockade of the entrance by the demonstrators. 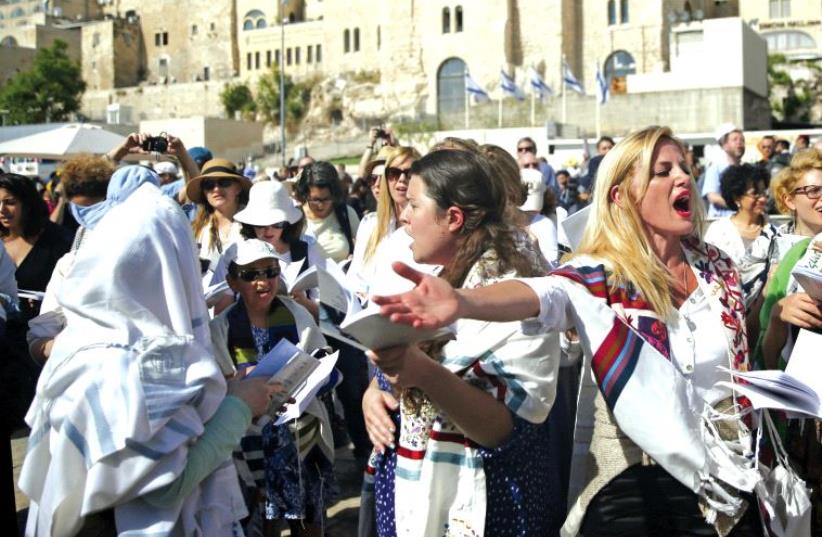 Members of the “Women of the Wall” wear Jewish prayer shawls which the Orthodox Jewish community traditionally reserves for men, during Passover near the Western Wall last April
(photo credit: REUTERS)
Advertisement
The Women of the Wall prayer group, together with hundreds of Reform and Conservative rabbis and activists will take part in what they are describing as a civil disobedience protest at the Western Wall on Wednesday morning.The protest follows the ongoing failure of the government to implement the resolution passed in January to create a state-recognized pluralist prayer space at the southern end of the Western Wall.Some 200 Reform and Conservative leaders and activists will make the short walk from the Old City of Jerusalem’s Dung Gate to the Western Wall plaza entrance carrying 10 Torah scrolls with the intention of entering the site.The two leaders of the Reform and Conservative movements in North America, Rabbi Rick Jacobs and Rabbi Steven Wernick, respectively, will be taking part in the protest, as will Women of the Wall chairwoman Anat Hoffman.Regulations put in place by the administrator and rabbi of the Western Wall, Rabbi Shmuel Rabinowitz, prohibit bringing external Torah scrolls to the site, a policy designed to prevent Women of the Wall from reading from the Torah in their services.Organizers believe that in all likelihood, the protesters will not be allowed into the site with the Torah scrolls, which could lead to a blockade of the entrance by the demonstrators.“We anticipate that the sight of hundreds of Jews prevented from reaching the Western Wall will move the prime minister to action,” said Hoffman.“He is a hairbreadth away from an historic solution to the conflict at the Western Wall,” she continued. “It boggles the mind that Mr. Netanyahu, who decries any international attempt to delegitimize our historic ties to the Western Wall, stands between world Jewry and an equitable arrangement guaranteeing every Jew the right to pray freely.”Rabinowitz strongly criticized the planned protest and called on the organizers to allow the prime minister to work on finding a solution, describing the demonstration as “a desecration of the name of Heaven... which does injury to the remnant of our Temple and the holiness of Torah scrolls.”“To my great sorrow, while the prime minister of Israel and his people are trying to find a solution to this complex dispute, a small group continues to raise the flames and to turn the fire of dispute into an eternal fire,” said Rabinowitz.Separately, the religious-Zionist organization Ne’emanei Torah Va’avodah (NTA) has initiated a campaign calling for the Western Wall agreement with the progressive Jewish movements and Women of the Wall to be implemented, and is the first Orthodox organization in Israel to publicly back the government resolution.Speaking to The Jerusalem Post, NTA President Rabbi Ronen Lubitch said the current impasse is damaging to Israel’s relationship with Diaspora Jewry, and that the situation cannot continue.“The Western Wall does not belong to any one group, and we need a place which includes everyone,” the rabbi said.“But there is a problem with a group of people who have a narrow, rigid perspective and who think everyone should fall into line with what they do. Many people in the Diaspora think that an injustice has been done, and this is problematic,” he continued.Lubitch said, however, that he believes the size and grandeur of the plan approved by the government for the pluralist prayer area is “disproportional” to the actual requirements for non-Orthodox prayer at the site, and has helped create opposition to the plan, principally from the haredi (ultra-Orthodox) leadership.He also said that because the religious establishment “created a world war against the Women of the Wall,” the struggle for their rights turned into a broader struggle for non-Orthodox rights, and could have been contained by simply allowing them to pray as they see fit at the current women’s section of the Western Wall plaza.Since the government resolution is the only concrete solution ready to be implemented, he said, and owing to the ongoing tensions with Diaspora Jewry, the plan approved by the government in January should now be implemented.Lubitch added that the current administration of the central Western Wall plaza is problematic, and NTA has proposed that it be managed by the Jewish Agency, the religious affairs minister, the Diaspora affairs minister and the Chief Rabbinate, instead of the current administration by the Western Wall Heritage Foundation.As part of the NTA initiative, several prominent, liberal, religious-Zionist rabbis will be posting videos on social media explaining their support for the agreement ahead of the seventh of the Hebrew month of Heshvan.On that date, the prayer for rain is inserted into the daily prayer services, and the Talmud records that the Jews of the Land of Israel delayed saying the prayer until this time, so that Jews who had come to the Holy Land on pilgrimage for Succot from abroad could return home safely before the winter rains began.Rabbi Benny Lau, head of the Ramban synagogue in southern Jerusalem, is one of the rabbis participating in the social media campaign.“The Jewish people are one, and we know that all the people who came from all parts of the Diaspora exile for the pilgrimage festivals needed to get home, and we wait 15 days after Succot until they get home and only on the seventh of Heshvan do we request rain,” says Lau in his video.“So the seventh of Heshvan should be a reminder that the Jewish people has many parts, and the parts which live in the Diaspora are connected to Jerusalem, to the pilgrimage festivals and the return to the Western Wall...and we need to give a feeling of being at home to everyone.“We must fight so that at the Western Wall, every single person from all of the Diaspora will feel as if they are at home,” he added.