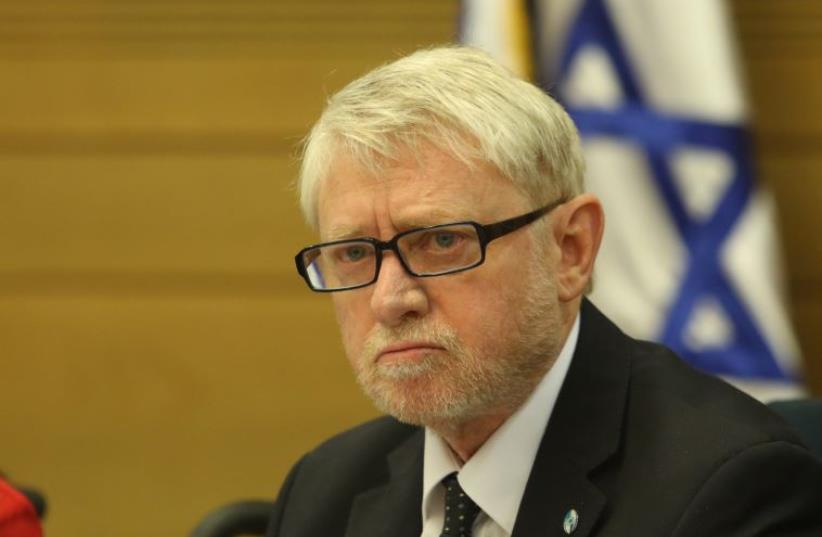 State Comptroller Joseph Shapira
(photo credit: MARC ISRAEL SELLEM/THE JERUSALEM POST)
Advertisement
Continuing his focus on socioeconomic issues, State Comptroller Joseph Shapira published a report on Wednesday slamming monopolization in the electricity and cement sectors among others, and addressing a range of issues.Shapira delivered the report, which referenced his previous report’s attack on the problematic monopolization of the natural gas sector, to Knesset Speaker Yuli Edelstein.Issues such as monopolization are not a mere question of poor governance, but also systematically negatively “impact the daily life of the state’s citizens,” “the market’s openness in the coming years” and “the increase in the cost of living,” according to Shapira.Complaining that the government has “not created the conditions for true competition in the market, monopolies will continue to rule various parts” of it, wrote Shapira.As long as “the conditions for true competition” do not exist, there is a greater “need to oversee pricing,” the report said.Shapira said that even the “pricing oversight committees which the government established are performing their roles in a defective manner,” and that the state “must act to make a defensive shield for the consumer which will stand as a protective edge” against abuse of consumers by oligarchs.In a segment focusing on the country’s electricity sector, Shapira explored how the Israel Electric Corporation and relevant governmental authorities have failed to carry out any structural change or generate competition in the last 18 years. Since the establishment of the Electricity Sector Law in 1996, the electric corporation has operated as a monopoly, without implementing any required efficiency programs to minimize expenses or reform its employment structure.Shapira called upon all of the relevant parties to work together in order to implement an efficiency program for the corporation. Stressing the urgency of comprehensive reform, he instructed Finance Ministry and the National Infrastructure, Energy and Water Ministry officials to promote alternatives to today’s electricity sector operations.About Nesher, the cement monopoly, the report said the government had agreed to remove price controls if Nesher lowered the price of cement by 2 percent and sold its Har Nof plant, but failed to follow- up on the agreement and test its efficacy. The government’s price control mechanisms in general are outdated, the report continued.The report also covered a range of other socioeconomic, infrastructure and environmental issues.It criticized the Tax Authority for failing to “defend the socioeconomic rights of taxpayers...especially of the weaker sectors.”More specifically, the report said that the Tax Authority did not act promptly enough for weaker sectors of society to receive speedy refunds when overpaying taxes – refunds that could make an immediate and concrete difference in their lives.The Tax Authority, the report found, functions without transparency, eroding trust in the even-handedness of its operations. It also made the process of claiming tax grants, designed to encourage the poor to stay in the labor force and help them break out of the cycle of poverty, too difficult to navigate and, thus, less effective.Next, the report turned to the possibility that the National Insurance Institute, without reforms, could eventually go bankrupt and be unable to pay desperately needed social welfare benefits to society’s weaker sectors.Unusual debt management techniques, the report said, has led to an overpayment for pension funds that essentially amount to a subsidy. The subsidy grew 60-fold in eight years, from NIS 15 million in 2007 to roughly NIS 893m. in 2014, the report found.Meanwhile, the report said, the Finance Ministry hadn’t dealt with the actuarial deficit of the National Insurance Institute. That deficit, the report said, poses a threat to the government budget. If it is not dealt with, the NII fund could reach its peak in 10 years, and be completely empty in 30 years, leaving the citizens who depend on it out to dry.In the area of transportation, the report blasted the state’s failure to prepare alternative airports following the long-anticipated closings of the Herzliya and Sde Dov airports.Other deficiencies identified in the same sector included the Transportation Ministry’s failure to regulate the operations of the taxi industry, which has not undergone any review in the past 10 years. In addition, Shapira looked at the ministry’s failure to provide equal opportunities to all bidders when issuing tenders to private transportation companies.Shapira went on to grade various authorities on their supervision of the country’s water supply to ensure it is not polluted.Regarding drinking water specifically, the state comptroller found that the Health Ministry has not been taking proper enforcement measures to ensure that such supplies comply with the ministry’s own standards.Looking at the larger water sector, Shapira called for the creation of a sustainable vision for water contamination prevention. He tasked the Water Authority Council with completing a master plan to determine rules for water reservoir production, damage prevention and longterm rehabilitation.The report also criticized the state for failing to take any initiative or any systemic approach to mapping out the patterns that make up the needs and concerns of the country’s 23,500 blind persons.The Social Affairs Ministry, Education Ministry and Economy Ministry are not doing enough to empower the blind to be able to exercise their rights and receive services due to them, Shapira said.In the area of good governance, Shapira noted problems with Israel Aerospace Industries’ employment of overpriced outside consultants, the process in selecting the consultants and the exorbitant bonuses they received.One particular case the report mentioned involved doubling the salary of the consultant, paying him a bonus of NIS 500,000 without recording the basis for the extraordinary payments and paying him NIS 4.6 million for successfully hitting certain benchmarks without the requisite approvals.The report also covered a range of other issues, from preventing violence in sports to the Finance Ministry’s lack of regulation of non-bank loans, which can lead to money- laundering and the financing of terrorism.