The Sigd, falling this year on the evening of Sunday, 15 November, is observed 50 days after Yom Kippur and is Ethiopian Jewry's most significant holiday - in Israel it is also a national holiday.

Today, since most members of the Ethiopian Jewish community have made aliyah (immigration to Israel) , during the holiday members of the community travel to Jerusalem and visit the Western Wall and the promenade in the city's “Armon Hanatziv” neighborhood. The holiday serves as an annual gathering of the entire Ethiopian community, and its members view it as an opportunity to strengthen their connection with their roots and culture.

Yuli Edelstein, then the Speaker of the Knesset said, “Friendship House is a center for encounters, exposure and unity for Ethiopian olim. It is a center for achdut – togetherness.”  We see on Sigd, when Ethiopian olim join with their local Israeli communities in celebration, how indeed Friendship House is a real center of “achdut” in the words of Edelstein.

Eli Dukorsky, mayor of Kiryat Bialik, says about Friendship House: “We wanted to create a real connection between our Ethiopian olims’ pasts and their new homes in Israel. They have rich cultural traditions which we want them to preserve and feel comfortable with in Israel.”

At a recent mezuzah (doorpost) fixing ceremony at Friendship House, with Edelstein, Dukorsky, members of the Ethiopian and representatives of the local community in attendance, you could really see first-hand the vital work the House is doing in making Ethiopian olim integrate into the local community and bringing together all the different segments of Israeli society.

Pnina Zeisler, Projects coordinator, KKL-JNF Northern Region says, “The center serves our Ethiopian community and also other communities of Kiryat Bialik - a place where adults and children can meet and connect with each other.”

Ora Tesama 's personal life story made her intimately familiar with the challenges facing Ethiopian olim. At the age of 10, she made the arduous journey from Ethiopia to Israel via Sudan, during Operation Moses. After graduating from the renowned Kfar Hassidim High School, she began her work with Ethiopian olim at the Ministry of Immigrant Absorption.

She later served as the emissary of the Jewish Agency to Ethiopia. In 2014, the Kiryat Bialik Municipality approached Tesama and asked for her assistance in coping with the large influx of Ethiopian olim that had settled in the town's Tzur Shalom neighborhood.

“It was during this period that the vision of creating a cultural and educational center for Ethiopian Jewry began to take shape,” says Tesama, now manager of Friendship House. “I knew that the Ethiopian olim needed something to hold them together and connect them to their heritage and culture. It was obvious that they had greater absorption difficulties than other immigrant groups in Israel. Most came from remote villages in Ethiopia and had never experienced a modern city with an advanced economic system. They had never even used electricity before. Their families were scattered and their traditional norms and beliefs challenged.”

Ethiopian olim gain a tremendous amount from the House, Tesama believes. “Friendship House is a community center in every sense of the word. It serves the entire Ethiopian olim community in Kiryat Bialik and beyond from kindergarten till old age. The design of the attractive facility was inspired by the customary Ethiopian Tukul, or mud hut, with its cone-shaped thatched roof surrounded by large open areas.

"We launched Friendship House in 2018 with the aim of creating not only a community and heritage center for Ethiopian Jewry, but also to make the center a hub for the people of Kiryat Bialik in general," Tesama explains. “Today, two years later, I can say with confidence that all our wishes have materialized.

“When Ethiopian olim arrive at the facility, it is clear to them that this is their place. It reminds them of the home they left behind. They feel that they can meet here and not feel different because of their old customs. At the same time, they are learning Hebrew and being gently exposed to our Israeli way of life.”

Tesama says with much appreciation and gratitude that KKL-JNF played a crucial role in the establishment of Friendship House. The entire garden and open area surrounding the buildings, including the lengthy trails through the countryside adjacent to the facility, were created by KKL-JNF. This enables olim to feel connected to nature as they did when living in the small remote villages where they grew up.

KKL-JNF is also creating a community garden next to the buildings, where children and adults can grow produce and herbs as they did in Ethiopia. Needless to say, the entire compound, including the buildings and gardens, is very attractive and appealing. It did not take long for members of the general public to take an interest.

"Today our facility is being used frequently by all sectors of society. We have teachers' union groups who meet here, advanced study sessions run by a variety of organizations, groups from the police, and local government. The list is unending," Tesama says. 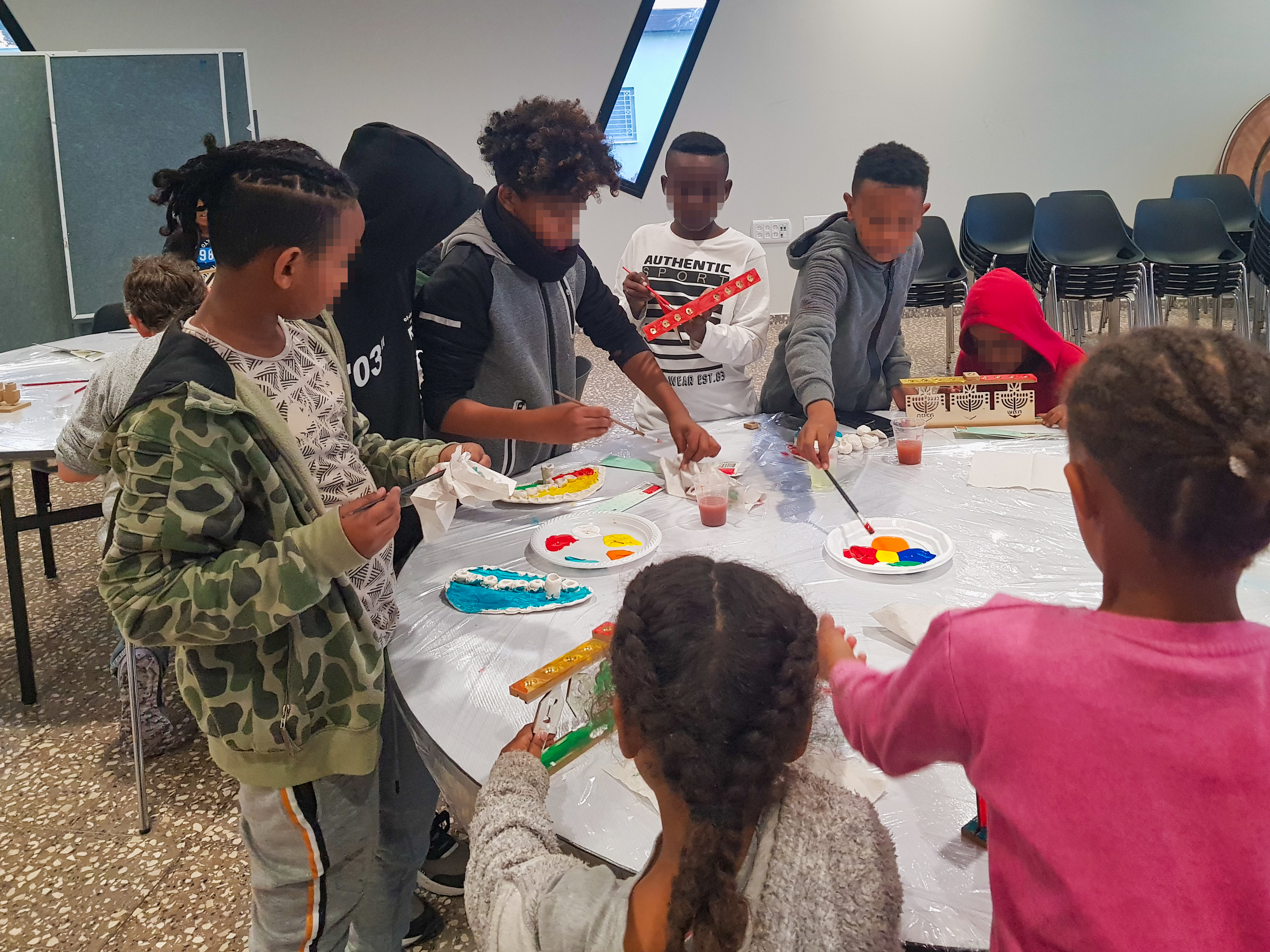 The Friendship House is invaluable in helping Ethiopian olim integrate. "The results are remarkable. When I realized that our large beautiful facility was in demand by so many different groups and organizations, I decided to open the bookings to all, free of charge, as long as they enabled the participation of Ethiopian olim. Through this, Friendship House has become an important juncture for Ethiopian newcomers to engage with veteran Israelis and get involved in all sorts of new issues and ideas," says Tesama.

“And, just as importantly, veteran Israelis meet Ethiopian olim and come to understand who they are. The system works and has created wonders. The success of the last two years can be measured by the huge numbers of people who make use of Friendship House and what it has to offer. Friendship House is a place that grants respect to the people who use it and receives respect in return."

The COVID pandemic which has hit Israel hard caused Friendship House to work extra hard in helping the Ethiopian community adapt to the new COVID reality.  "During the ongoing Corona crisis, the scope and volume of our work has skyrocketed, and emphasized just how vital our facility has become for the city. For example, we are now hosting five school classes in the mornings for a nearby school that does not have enough classrooms to separate pupils into the mandatory small capsules," says Tesama.

Tesama explains that due to COVID, the Sigd celebrations this year will not be the same as previous years. "Due to the Corona restrictions, the celebration is going to be different this year. It’s disappointing because our first two festivals were amazing. We held each of them in the beautiful KKL-JNF gardens before huge crowds.

"Last year, there were really special events with much praying, music, and dancing. This year, in order to prevent people from congregating and endangering one another, we have decided to use a city van that will travel all day through the Ethiopian Israeli neighborhoods playing traditional Ethiopian music and prayers. This will be our way of bringing the festival spirit to the city this year."

Tesama says, “the goal of Friendship House is to preserve Ethiopian heritage and connect between the old and new – past and future. A ‘safe place’ where those of Ethiopian descent and those from outside the Ethiopian community can learn about each other's culture.

“In Ethiopia, we lived in villages and nature - here in Friendship House – the olim can live in the same type of natural environment. So, it's like a home from home – a place for social meeting and for connecting with the people, land and nature.

“Due to the help of KKL-JNF and its friends throughout the world we will continue to develop this special place,” Tesama concludes.

To keep Tesama’s vision alive, please support Friendship House so they can continue their vitally important work - CLICK on here to donate. Written in cooperation with KKL-JNF