The tablet was acquired in 1943 by an archeologist, who owned it until his death in 2000. 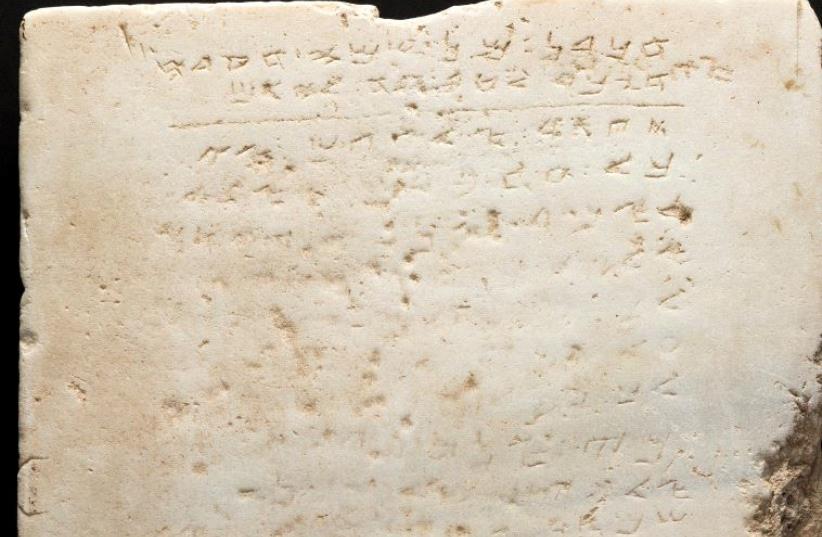 A stone tablet thought to be about 1,500 years old with a, worn-down chiseled inscription of the Ten Commandments.
(photo credit: REUTERS)
Advertisement
DALLAS  - A stone tablet thought to be about 1,500 years old with a worn-down chiseled inscription of the Ten Commandments will be sold next month at auction, with a stipulation that the buyer must put it on public display, an auction house said on Friday.The two-foot (61 cm) square slab of white marble weighs about 200 pounds (90 kgs) and is believed to be the oldest existing stone inscription of the commandments, Dallas-Based Heritage Auctions said. Opening bid is $250,000 for the stone, which the current owner likes to point out is not the original.The tablet is inscribed in Samaritan script with the principles which are fundamental to Judaism and Christianity. It was probably chiseled during the late Roman or Byzantine era, between 300 and 500 A.D., and marked the entrance of an ancient synagogue that was likely destroyed by the Romans, Heritage said in a statement.It was discovered in 1913 during an excavation for a railroad line in Israel, said Rabbi Shaul Deutsch, founder of the Living Torah Museum, in Brooklyn, New York, which obtained the tablet in 2005.An Arab man, possibly a construction worker, acquired it and set it in his courtyard, where it remained for three decades, Deutsch said.The museum, which contains a large collection of artifacts of Jewish life and history dating back to antiquity, is shifting toward a more hands-on focus to attract younger visitors and decided it was time to sell the artifact."The sale will provide us with the money to do what we need to do. It's all for the best," Deutsch said in a statement.The tablet was acquired in 1943 by an archeologist, who owned it until his death in 2000. Deutsch was able to acquire the tablet for a temporary period through an agreement with the Israel Antiquities Authority and then purchased it outright after a legal settlement, Heritage officials said